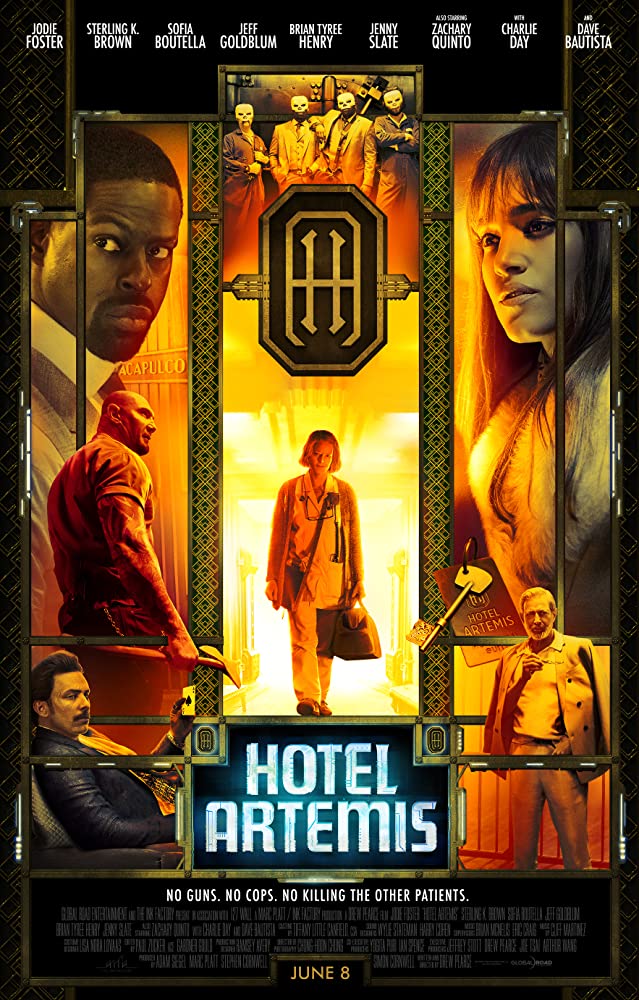 Films like Hotel Artemis puzzle me – on one hand, they have everything going for them – A-list casting from Jodie Foster (her first role in since Elysium back in 2013) and Jeff Goldblum (who I can’t really take seriously after watching his Disney+ special The World According to Jeff Goldblum – [review coming soon, btw!] especially in a role of dangerous crime lord who’s running the entire LA) to the newly rising “young blood” Sterling K. Brown and Sofia Boutella, and the concept is pretty cool (a hospital or “hotel”, if you wish, for criminals where they have rules, because they are unique and cool and… totally not ripping-off John Wick series… ;-)) but that might be THE problem.

Where other movies (and let’s face it, the John Wick influence is pretty on the nose) establish their characters and flash them out bit more, so when there is a point where they (could) die, we care, this one didn’t seem to bother. We’ve got hints of story lines where person A had a past with person B and he’s always been dragged down by person C, but it never really pays off in the way the filmmakers would want.

And that’s the main issue with this movie – plenty of things are hinted at, but some kind of fizzle out, or because of the underdeveloped characters, never pay off. And trust me, I’m always the one that complains if/when the audience is treated like a bunch of idiots who need to be told every single little thing, just to make sure even the kid who’s on their phone all the time got everything, but there is a fine difference between drop-feeding us some much needed exposition slowly and not expending on your characters (I’d say the master of this, at least for our generation, is Christopher Nolan, and there will be reviews for his movies, believe me).

BUT and this is a massive, almost Cardi B-like but(t), this is Drew Pearce‘s directorial debut. And he definitely can do style, the action scenes were not all chopped up to bits and overall the movie didn’t feel like a chore, which is always a plus, even though if we’ve had 20/30 minutes more, we could’ve had a better characters… maybe? I would not give up on him and I think considering this fact, he’s handled his first movie fairly well.

Overall: Hotel Artemis is worth checking into, if you like mindless, 90 minute action drama, where you don’t need to pay that much of attention to the story or characters. If you want more, consider checking into a different kind of hotel (I’ve heard Grand Hotel Budapest has excellent manager :-))

And this is all for this film. What did you think, did you like it, hate it? Was I too harsh? Let me know!