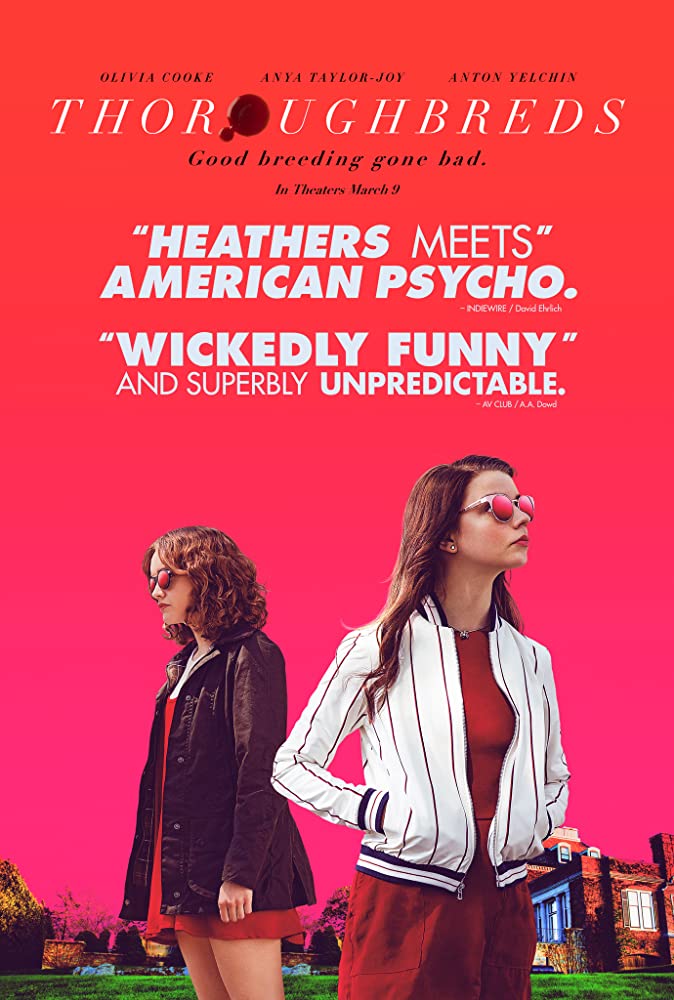 I am not going to lie, I’ve enjoyed Thoroughbreds much more than I’ve anticipated. This is the kind of movie that is really hard to describe without going into spoilers, so for those who want to see the movie and therefore won’t be reading any further, I’ll just say this – it’s a really good movie where all the main stars get to shine, but the one that shines the brightest is Anya Taylor-Joy.

On a surface level, this movie isn’t something new – all kind of “psychotic” disorders have been portrayed on the big and the small screen for the past 20+ years and it seems people are enjoying them, as Hollywood studios keep making them.

Where this movie differs from the rest is it puts you on the edge of your seat from the very beginning, where the cards are seemingly on the table, the introduction tells us who’s the “crazy” girl (brilliant performance by Olivia Cooke), but not even 10 minutes in and you start to question whether you couldn’t make the case for Anya Taylor-Joy and as the movie progresses, one thing is for certain – there is something uneasy about both.

First hour or so the movie has a great atmosphere, where it builds up the main villain (step-dad) just to pull the rug right under you. Where a lesser movie would just keep him a villain, maybe made him slightly creepy, this one chooses a different path. For me, the pivotal scene of this entire movie, is the confrontation between him and Lily, Anya’s character, in the kitchen. After that scene you realize that everything you thought you knew about this story/character is skewed by Lily. That’s the point where the second “twist” happens, where you realize it’s not Amanda (again, Olivia is superb) who’s the propeller of this story, even though, she can’t feel any emotions, so she’s just faking everything, but Lily. That’s the point you realize Amanda is trying to fit in, in her own way, and just because she can’t feel anything she’s not inherently bad, but Lily is as she is choosing to kill her step-dad and nothing is stopping her.

If you were to put anybody less talented in the role of Lily, this movie would’ve been an alright movie at best, and easily forgettable. By casting Anya, the director (Cory Finley, for whom this was his debut film) made an excellent choice as she definitely has the raw talent to pull this off. The entirety of this movie lies on her and her ability to convince you of her evilness in a really subtle, non-cartoony way and she’s nailed it.

The final nail in this would be the end scene with Anton Yelchin (this was one of his last movie before his untimely and really unfortunate death) where she embraces everything and goes along, knowing very well she’s not the “good guy” in this story, even though she got away with everything.

Overall, this movie surprised me, gave me chills at some places and made me even more aware that Anya Taylor-Joy is (or at least should be) the next big thing and I really hope she’ll have a long, long carrier.

That’s all for this movie? Did you like it or thought it wasn’t anything special? Let me know!