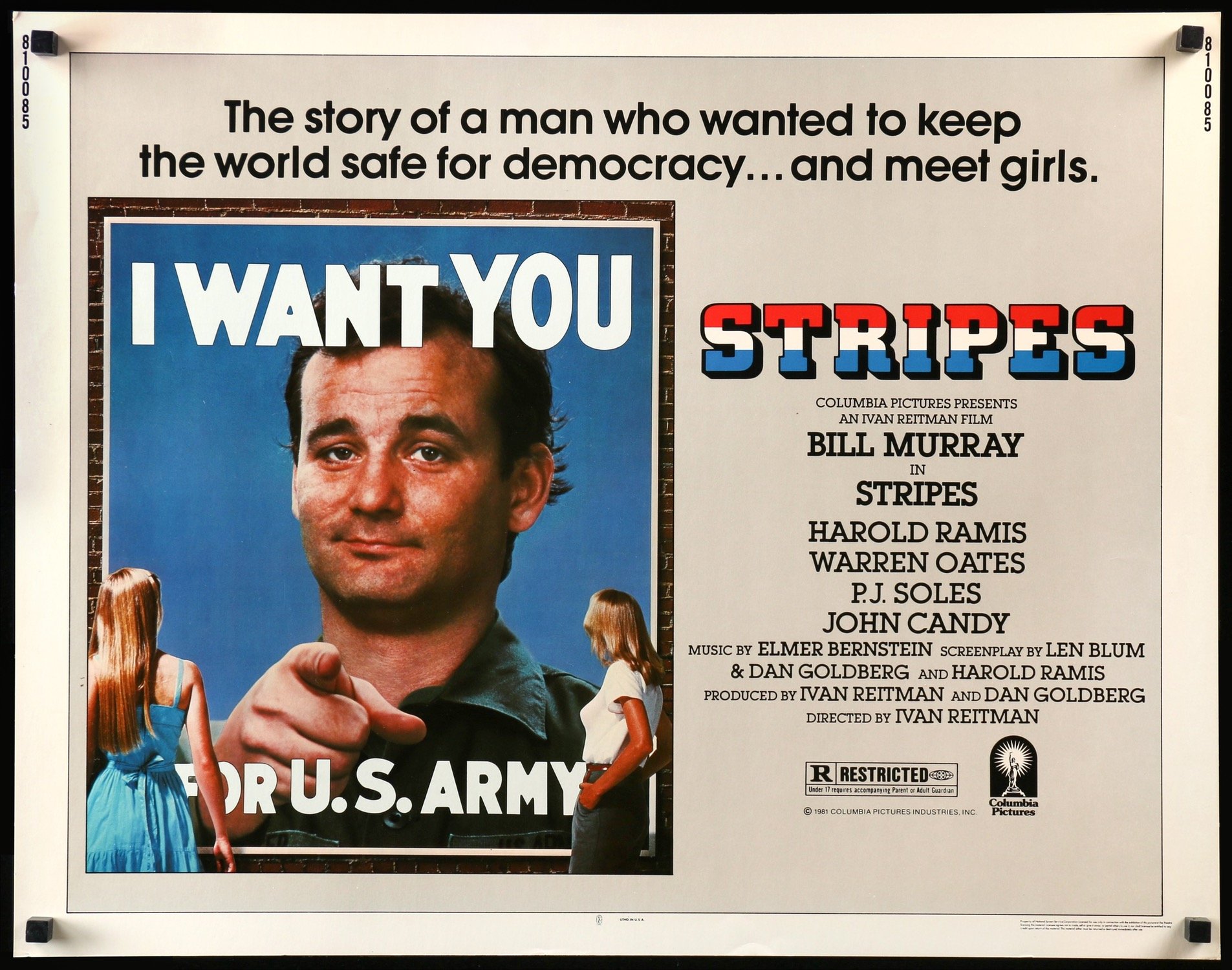 Let me just preface – I did grow up on some comedies starring Bill Murray, so I absolutely adore the guy. Ghostbusters is one of my favorite comedies, and I also like (I’m taking a cover while writing this) Ghostbusters II – both of these movies I love to this day. That’s why I went into Stripes expecting a good time.

What I got was a movie that’s split into thirds – first one was alright, second was pretty funny and the third one totally unnecessary.

The first part of the movie to me was anything prior our protagonists (Bill Murray and Harold Ramis) join the army, and unlike one of the later episodes of Family Guy, I didn’t mind it and I didn’t think it dragged on (the joke in question was about a movie you remember fondly, but it’s now dragging on). We’ve established characters, what are they about and I wish more newer comedies would take some time to do this and not feel the need for the audience to laugh every 10 seconds with some attempt at humour.

The second part was them joining the Army, going through the training and clashing with Sergeant Hulka. I thought it was well paced, some funny scenes, but nothing where you would properly burst into laughter, but enjoyable nonetheless.

The third part was after our heroes finish the training and then being shipped to Italy, where just so it happens, they end up in Czechoslovakia (hey, that’s where I’m from, except it’s been Czech Republic and NO, I refuse to call it Czechia) where there is the obligatory “action scene”. This part was totally pointless, didn’t really add too much to the story except additional 30 minutes, where at the end the movie felt like a chore.

Had the movie finished with some funny montage of them doing random/hero stuff right after the training session, my rating would’ve been better, but it didn’t. I also wonder if I were to grow up watching this movie the same way I grew up watching the two Ghostbusters movies, how would my rating be affected, but we will never know that now.

When I wrote “comedy that didn’t age well”, I didn’t mean the scene in a strip-club where John Candy is wrestling at some point 5 different women, or the fact John Larroquette was spying on some showering women with binoculars, because that wouldn’t be fair. Yes, by today’s standards, it is 100% wrong, but back in the 80’s nobody cared. I am one of those people that judges the film based on its merits and won’t pretend that had I seen this film in 1981, when the movie was released, I’d have been “woke” enough to say that’s wrong, no I probably wouldn’t. This is not me defending the movie, but the fact of the matter is, nobody paid any attention to this, and not just in this movie (this one is actually tame by different 1980’s movie standards).

What I meant by “didn’t age well” was the pacing, and most of the jokes – as they are harmless jokes, where today, we are used to something totally different, so they won’t amuse you as much. You could say “hey, but that’s judging the film based on today’s standards, you just said you don’t do that!” but it’s not really, because if movie won’t make you laugh where it’s supposed to, it doesn’t matter whether the movie is from 1981, or 2001.

Just to be clear, most of my favourite comedies are from the 80’s and 90’s (already mentioned Ghostbusters, Coming to America, Trading Places, Beverly Hills Cop series etc.) and these have never failed to make me laugh.

If you want an army comedy from the 80’s, might I recommend often overlooked Private Benjamin from 1980?

That’s all for this one, what did you think? Was I harsh? Do you adore this movie? Let me know!