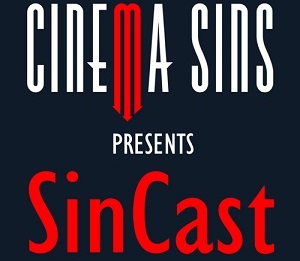 From time to time, I will try to review something else than a movie or a TV show (a book, a game, or a podcast) to spicy things up a bit (but don’t you worry, I’m still all over movies and TV shows, that will be my main jam).

Firstly, let me just start with a brief history lesson, the “CinemaSins and me” if you’d like. They have started putting videos out mid December of 2012, I firstly became aware of them about 2 months later (the first CinemaSins video I’ve seen is Everything Wrong With Harry Potter & The Sorcerer’s Stone in 3 minutes Or Less) and I didn’t know what to think about it. Some things made me laugh (“This camera angle is not appropriate”) but I didn’t know what to make of them yet. So I’ve watched the other videos and quickly afterwards became a fan and subscribed. From then on, every Tuesday and Thursday when they’d release a new video, I’d patiently wait and if it’s a movie I’ve already seen, I’d watch it. If not, that’d only motivate me to watch that movie, so I can watch their sins video.

Back then, there were only 2 people – Jeremy Scott (the voice of CinemaSins) and Chris Atkinson and they were only making the “everything wrong with” videos. I believe around 2014 the third Musketeer joined the party – Barrett Share and if my memory serves well it was him who thought of launching the SinCast in early 2015 to give people a peak at the sin crew (going by what they said on their podcast). And boy, was that a good idea.

It’s no secret that people on the internet can be great, loving and nurturing. But also there is the other side of people who need to hate on something and unfortunately, CinemaSins’ sense of humour is often lost on many people, which is a shame, as listening to them for almost 5 years now, I feel like they definitely do not deserve the hate they get. And this podcast “humanizes” the evil, nit picky voice that “hates everything” – it’s just a joke, people! Learn to take a joke, your life will become simpler, better and more enjoyable.

The main thing I like about them is you can tell they’ve known each other for a long time as they are all friends, they are not in it for the money, but they actually care and LIKE movies. I really like the way the interact with each other, how they make each other laugh by talking about any dumb stuff that comes to their (well mostly Jeremy’s :-)) head, how they are not taking themselves seriously and just trying to have some fun.

Yes, most of their podcast episodes are slightly over 2 hours, but trust me, you won’t even realize how quickly that time passes when you are having fun. I really need to thank these guys for entertaining me during my travels (my job involves driving a car a lot, so something like this is a blessing for long drives, makes every car ride more enjoyable) well at least prior to these quarantine times we are all living in right now.

If you are a movie lover, I’d strongly recommend this podcast. Don’t expect any experts, because I don’t think any out of these three fine gentlemen would call themselves an expert, but you can expect knowledgeable people sharing their opinions on movies, TV shows, and sometimes other stuff that’s happening (plenty of traffic rants), but mainly having fun.

They also do a movie review episodes, where they talk about a movie that’s just been released in the cinemas (well, not just now, cause COVID-19) but you should have a pretty good backlog of episodes that should give you something to do during this quarantine and hopefully after that too. I know I won’t stop listening to these guys any time soon.

That’s all for this one, what did you think? Do you like SinCast/CinemaSins? Let me know!

Comments (3) on “SinCast presented by CinemaSins Review – No podcast is without a sin…?”