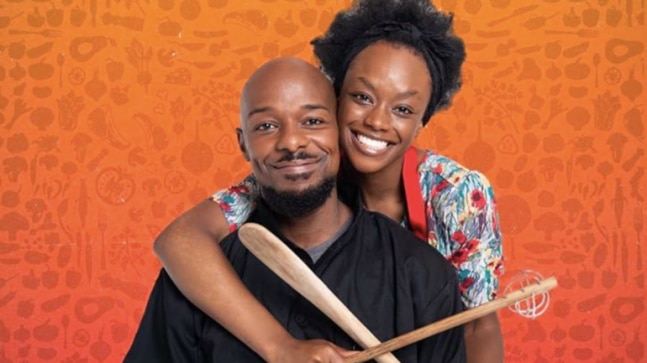 Films like Cook Off are hard to rate and review, as I am torn between liking the actors and cheering for the “little guys”, who just want to make movies, but at the same time, not liking the way the movie is actually made.

I do know a thing or two about Zimbabwe, since my girlfriend (of 2+ years now) is from there, so I do understand that (her words) “there are no money going into the arts”. Based on that point alone, I am trying to be positive about Cook Off, as I enjoyed the actors, as even though they were not spectacular, they tried their best, and mainly Tendaiishe Chitima who played the main character Anesu, alongside Charmaine Mujeri, who played her best friend Charmaine, have been the highlight of the movie for me.

My two main issues with this film are the technical side, and the screenplay. Now, the technical side is something I will only mention briefly, as I honestly understand, this won’t look like your Hollywood movie, not by a long shot. But that’s also not what I’m talking about, it was mainly editing and certain close-ups, that were distracting and not necessary, and on the opposite side, there were some emotional scenes, that were shot in kind of weird, medium distance, where I’d actually appreciate something slightly closer to the characters. But again, I’m not going to judge them too harshly for this aspect, as this is what I meant by “they are doing the best with what they have”.

The script is where I feel like they could’ve done much better job, as this movie relies on so many crutches, that it just feels so random, especially towards the end. I obviously can’t discuss them without spoilers, so…

The main conflict of the movie is Anesu goes to this cooking competition and just happens to bump into her baby daddy, who’s now dating/married (can’t remember now) this other, richer girl, who believes she’s the real deal when comes to cooking. But, when she gets eliminated and Anesu continues, she begins scheming and talks another competitor, to sneak out when the filming starts, and get into the (unlocked!!!) production office, where she could “borrow” Anesu’s phone, so when she ultimately gets eliminated, she hugs her and slips Anesu her phone and then she tells the producers, who eliminate Anesu LIVE ON AIR! I mean, just with this scene alone you have to suspend your disbelief as:

Listen, every movie to an extent has moments like these, but in this movie it was just over the top. And this is something that could’ve been improved with no resources – why couldn’t the story be about Anesu’s journey throughout the show, while she would’ve developed a relationship with her boyfriend-to-be? Or maybe, why not take it through the mother daughter relationship, so the ending (that kind of leaves a thing unanswered by the way) pays off bit more? I’ve just felt this drama was so manufactured, it robed this movie of any potential enjoyment, and the most frustrating thing is, the movie actually could’ve gone at least two different ways, where you wouldn’t need this “my baby daddy’s girlfriend is jealous because I beat her in a cooking show” level of drama, that made this otherwise fairly enjoyable movie feel cheap.

When the movie started, I honestly could see myself rating this higher than I do, because as much as the technical aspect of this bothered me, I’d have forgiven that, if they gave me story, that feels natural, with some decent performances. Unfortunately, this was too much reality TV drama, where it kind of leaves you wanting something else, something more, story wise. But judge this for yourself, as you can stream it right now on Netflix (at least in the UK).