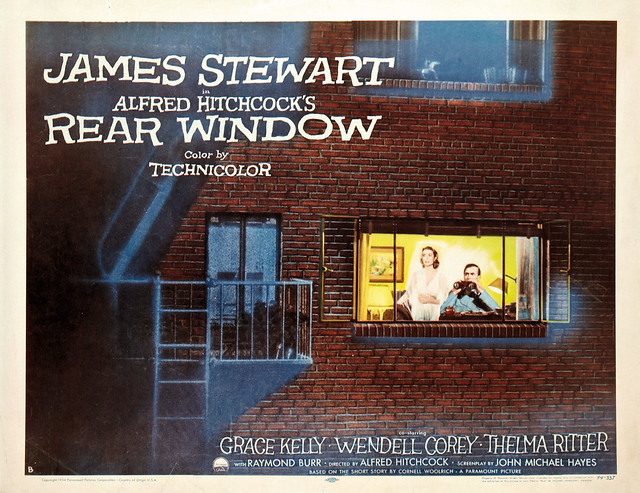 There are only a handful of movies I’d call a masterpiece. To me, that word means something, that can’t be changed, tweaked, improved on by any means, as that would temper with something else and might destroy the entirety of whatever you’re trying to temper with (a movie, a book, an album…) Rear Window is without a shadow of a doubt (see what I did there? Ok, I’ll see myself out now :-)) a true masterpiece, where everything is crafted to a perfection.

I’ve recently re-watched it for a third time, and I was still amazed how much this “simple” story structure (a man who broke his leg, so now he needs to stay home, before the internet and TV and needs to find a way to occupy his time) covers, as it’s not just about James Stewart being in a wheelchair. We get to see and experience plenty of other stories throughout his binoculars. And as boring as it might seem, it’s actually fascinating, when you have somebody like Alfred Hitchcock behind the camera, who makes you fall in love with most of these quirky characters. And this might seem trivial, but it’s not, as that gives this movie the extra flourish, where every time we might get “bored” with the main story line, we jump to see what this neighbour is up to, or this one…

Of course, the main story is about whether there was a murder or not. And the brilliance of this movie is the built up towards the last scene. Hitchcock perfectly crafts the field, the rules of this film, and slowly guides you towards the end, where for it to make sense, you need to believe that Stewart’s character isn’t just a bored man with a set of binoculars and that his neighbour might actually be more sinister that he seems.

While re-watching this movie, I’ve noticed something, which might be considered a bit forward thinking – Grace Kelly is the hero of this movie and the “moving” piece. Think about it – yes, Stewart’s character was the one to notice there might have been something fishy going on, but everything practical that’s done in this movie, including the final “rescue” of our main protagonist, is only due to her. When I think about this now, this movie could very well be compared to a chess game – Hitchcock is the player, who moves every piece, and even though James Stewart is the “main figure” (King) of this movie, as anybody who’s ever played game of chess know, Queen is almost a key to any game. Can you win without her? Sure you can, but it’ll be much more difficult. This is Grace’s role here – she’s the Queen she was born to be… well, in a real life, she did become the Princess of Monaco, so close enough?

I do need to mention that even though today, most actresses are stunning, there was something about (especially) two stars from these years of 50/60’s – Audrey Hepburn and Grace Kelly – where I don’t know how to describe it. They almost seem out of this world, just the way they carry themselves, they speak, they look… In every scene in this movie, Grace Kelly wears something different, but she looks like she’s about to walk a fashion runway in Paris. No wonder she became a real-life princess, even though I wish we would’ve gotten her in more movies.

Rear Window is definitely in my TOP 3 of Alfred Hitchcock’s movies and you know, he’s got a few movies that are identically great, so it’s no small matter to rank his movies, trying to establish which classic is better than another one of his classics. But instead of mentioning the obvious ones, I’d want to give a quick shout out to the movie Rope (1948). “The” Hitchcock movie, that doesn’t get the credit it deserves.

If you haven’t seen this movie in some time, I’d highly recommend re-watching it, as this gets wrongly classed as “that Hitchcock movie about the bored guy with binoculars”. Not that this isn’t fairly accurate description, but there is just so much more to Rear Window than this. Mainly with the precise focus on other stories of the neighbours around our main character, where you can actually see resolution to them! That is what separates this from any other remake or movie, that borrowed an element of two from this film. That is what makes this film a masterpiece. That and Grace Kelly, the Queen.