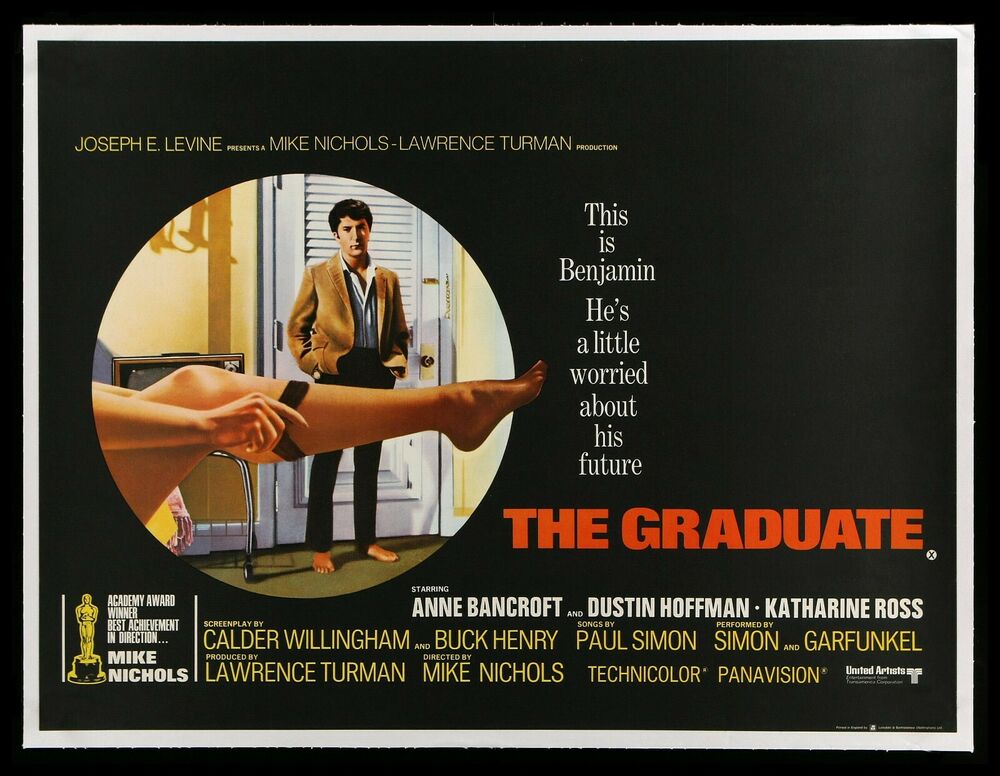 After watching and reviewing Rumor Has It… (2005, my review here) a movie, that’s based on the idea of The Graduate being based in reality, I realised I have seen this classic only one time, about 10/12 years ago, when I was getting into movies. So I had to re-watch it, obviously. And it is still great, but… it is definitely one of those movies that in these times plays differently.

First and foremost, I am not one of those people looking to be “too woke” about older movies and how “bad” they are when comes to variety of different things we just don’t do today. So, setting that aside, Mrs. Robinson, one of the most legendary MILFs (maybe the very first one) is a proper sexual predator. I mean, seriously. Especially before their first sex, she traps poor Dustin Hoffman in the hotel room! I mean, those are some Weinstein-like practises…

In all seriousness now, I am joking… well, kind of. I will not judge the movie based on this, even though she might be taken as a problematic figure in these days. But I think we are all mature enough to acknowledge that yes, her behaviour is not great, nevertheless, it fits within the movie. And the movie, surprisingly, holds up. I know, you didn’t expect to be reading this after the Weinstein comparison, right…? Well it does, because what people often remember about this movie is the Mrs. Robinson, the famous line “Mrs. Robinson, you’re trying to seduce me!” the Simon & Garfunkel soundtrack. But they often forget this movie is more about growing up, how youth is wasted on young people, who can’t help it, as they don’t know what to do with themselves, they don’t know who they are yet. And they get lonely.

The thing about The Graduate is you forget how great all the performances were. And how subtle they are. That is the number one thing that jumped out at me, how everybody in this movie is great, but really subtle about everything. What I have also forgotten is how this movie has tempo of its own. It feels slow, in places almost lazy, but it’s not boring! It emerges you in its world, getting you into the same mindset as Dustin’s character, where everything is slow for him. He’s bored, he doesn’t know what to do, he just wants to take it easy, maybe too easy.

Of course, there is one more thing that made this film into the classic it truly is, the ending. I think I don’t have to be too careful about discussing a movie, that’s over 50 years old now. On top of that, it’s been parodied to death on different shows, movies, sketches… It’s undoubtedly one of the most memorable movie endings of all time. What I like about it, is how bitter sweet it is, as at first, it seems like your typical Hollywood happy ending. He gets the girl, they escape, everything is in front of them. But then, the last 30 seconds of the movie happen, where they exchange the now the famous looks of “well, what now?”, where in those two looks, you can see so much fear, doubt, uncertainty… it’s an acting masterclass. And that ties in with the “youth being wasted on young people”, where they sometimes just do, and then think. Everything comes full circle.

The Graduate can be definitely viewed very differently today, if you want. Or, we can stop pretending we would have always stood on the right side of history, and get over something, that is undoubtedly bad, but that should not cheapen this movie in any way, shape or form. This movie is still relevant even today, as it deals with universal themes of being young, where you are no longer a child/teenager, but you don’t feel like a “proper adult” yet. And the world is this big, and scary place. And if there is one thing young people can relate to today, is this idea of world being a big, scary place…