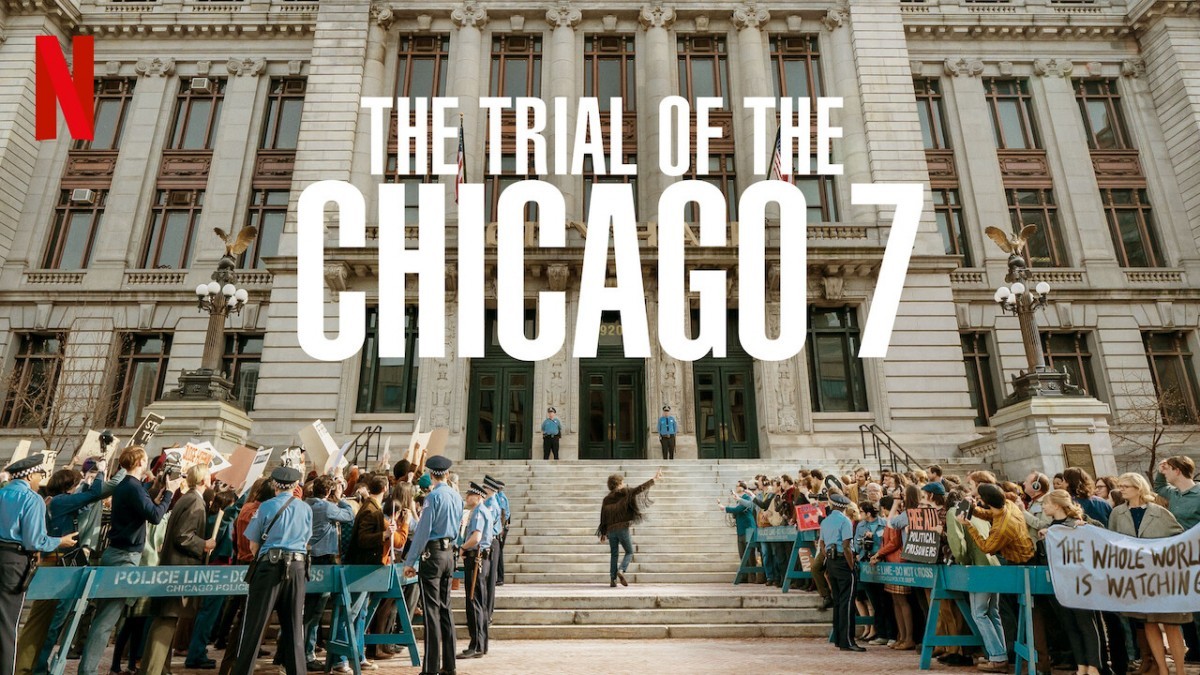 Your enjoyment of this movie will be directly influenced by whether and how much you like Aaron Sorkin as not only “the screenwriter”, but also Aaron Sorkin “the director”. Because The Trial of the Chicago 7 is the purest Sorkin I have seen since… maybe ever? The fact he’s behind the camera and not “just” writing a screenplay means a lot, as this movie is exactly as his dialogue – precise, entertaining, a bit of full of itself, but at the end, no matter how “sugary” that ending might have made you feel, he’s got you exactly where he wanted. At least, he got me.

The Trial of the Chicago 7 is your almost stereotypical “Oscar-bait” movie, that follows unwritten guidelines, that might look like this:

I think you get the point, because this movie is definitely guilty of following a narrative, that’s well known, especially during the fall season (that’s the award season in Hollywood, where if there was no pandemic, these movies would have been the top contenders for some awards and being released in the cinemas). Fortunately for this movie, being formulaic is not necessarily a bad thing, as long as the viewer (me) only notices the formula after it happens. What I mean by that is, if I am truly immersed in a movie, I tend to forgive certain things that come to me only after the movie is over and I think about it. Whereas if I am not too into the film I am watching, I tend to get bored, and start noticing those things as I they happen. And this film had me from the very beginning.

It’s insane to think that most things that are portrayed in this movie not only happened, but some happened even worse than portrayed here – the perfect example of this would be the treatment of Bobby Seale (brilliantly portrayed by Yahya Abdul-Mateen II) that was even worse during the actual trial, than displayed here (fairly briefly, but still it makes you uncomfortable). Usually, I would give you more information, but given this is still a fairly new movie, I don’t want to spoil it, so for more information, I direct you to the spoiler section on IMDb’s Trivia page.

That leads me to my next point, why I don’t mind this movie being so “formulaic” – the performances are simply stellar all around. From Eddie Redmayne, Jeremy Strong to already mentioned Yahya, all great performances within their own right, but the highlight (and surprise) for me was Sacha Baron Cohen. I have never seen in anything else but comedies, so it was one of those “huh, this guy can act really well” moments, where by the end, he stole the movie for me, which is quite a shock, as the character he portrays, seemed to be quite a “hipster” in a real life, to put it really mildly. That is how I knew he delivered, by making me like a character, who I wouldn’t probably get along that well in real life (I know, the guy he’s portraying is no longer alive, but that’s beside the point. Also that’s not a spoiler, as he survives the movie).

There is something almost comforting about these big, “important” movies still being made “the Hollywood way”. As it became a formulaic for a reason, because it usually works. And The Trial of the Chicago 7 worked for me from the very start. I really liked the story structure (sometimes we follow the trial, intercut with stand-up routine), I really liked the flow of the movie, as it never felt dull or boring (and we talking about a movie that is slightly over 2 hours) and most importantly, I did like the ending, even though I do understand if somebody tells me they didn’t.

Overall, I would strongly recommend this film, especially if you love “historical” court dramas (the historical being in quotes, as it feels weird saying that about a film taking place in the late 60’s), Aaron Sorkin, and the old, comforting Hollywood formula. Given what we have been through lately (and the fact the pandemic is still happening) we all deserve something comforting, even though this film will definitely make you uncomfortable at some parts.