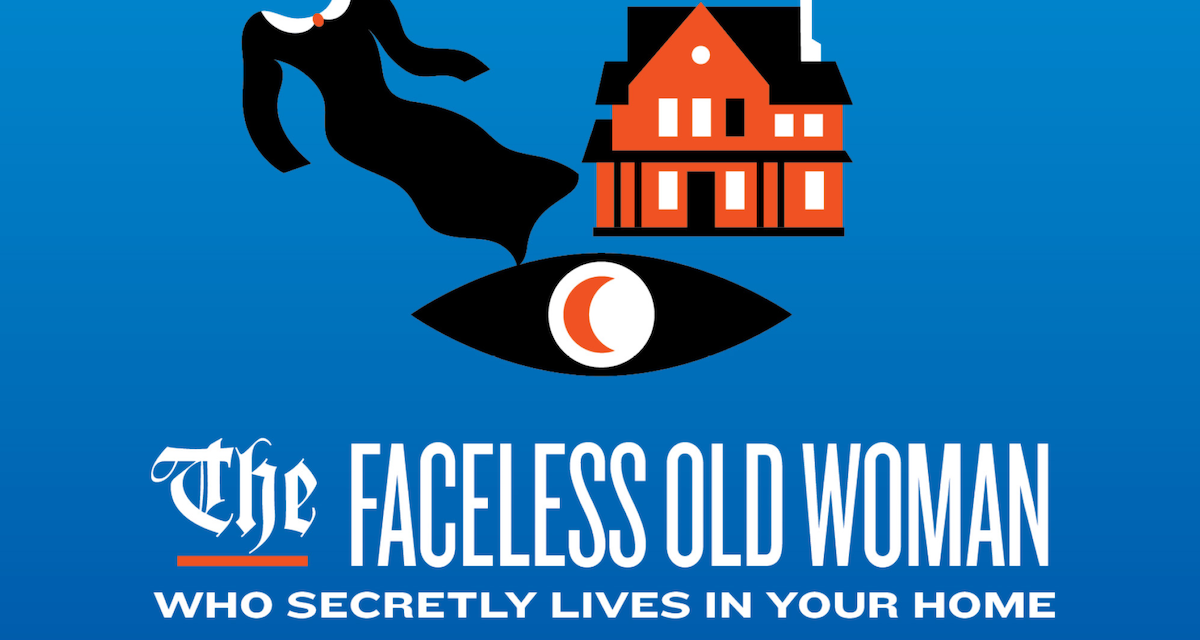 This is my very first book review and I am glad it was this book. The Faceless Old Woman Who Secretly Lives in Your Home (what a handful to say) is from the same people, who have been bringing you the podcast Welcome to Night Vale since 2012. I discovered the podcast around 2016 and loved it ever since. I know the people behind this book wrote other books too, but they weren’t as intriguing to me as this one, as I have always liked the character of the Faceless Old Woman (narrated beautifully on the show by Mara Wilson) because of the the mystery surrounding that character. Why is she faceless? Who/what made her the way she is? So when I discovered there was a book just about her, I couldn’t wait to read it. And it’s a good book, don’t get me wrong, but I felt like it could have been better.

First of all, the book is “split” between past (where we get to know the girl before she became a woman and before she, you know, lost her face) and present, her in Night Vale, focusing on one of Night Vale’s residents, Craig. I loved all of those parts from Night Vale and about Craig and I loved the start of the book about her childhood, growing up etc. This would be really difficult to discuss without going into some spoilers, so…

When this story turns into a pirate adventure, I was just slightly confused. What should have been a cool idea, just felt all over the place. You can tell the writers could write about her and Night Vale with their eyes closed at this point, because the text felt “confident”…? Whereas the pirate stuff felt just off. I am not one of those fans who presumed the entire book would take place in Night Vale, even thought it’s surprisingly little of Night Vale there. But I get it, it’s all about the Old Faceless Woman and about how she became her… but is though?

I think that’s where I struggled with this book the most, as the book plays really fast and loose with the rules and never properly explains why she survived her death. I found that disappointing, especially knowing all the crazy, imaginative stuff from the podcast I know and love, where you have literal angels (if they exist in your universe, surely they could have had something to do with that?) and all sorts of mystical, strange creatures running around Night Vale. I do understand that it might be part of the “magic”, that it never is fully explained why she survived etc., but come on. If you write a book all about the Faceless Old Woman, I would expect to know how she became the Old Faceless Woman. And the book tells you… just because…? Or because she’s the only person ever to have been wronged, so she can take her revenge indefinitely…? Also, there is a part where she get’s hurt, but she’s already dead…? Can she die twice? Can she control when or whether she dies…? To me, this book doesn’t really answer these questions.

All I am trying to say here is I wish I would have known more about the actual why. I think the writers did a good job with her backstory, an ok job with all the pirate stuff, excellent job when comes to the present stuff and the “twist”, or the shocking ending… well, it wasn’t too shocking for me, because you can kind of see it coming from a mile away.

But I still really enjoyed the book, it reads very well, and if you like quirky writing, or you are familiar with the podcast, then this book is for you. Even though I wish we would have gotten a bit more as to why she is the Faceless Old Woman, and not just how, I would recommend you reading this. And if you haven’t already, check out their podcast(s) as they are definitely interesting people to follow.

That’s all for this one! Did you read this book? What did you think about it? Let me know!