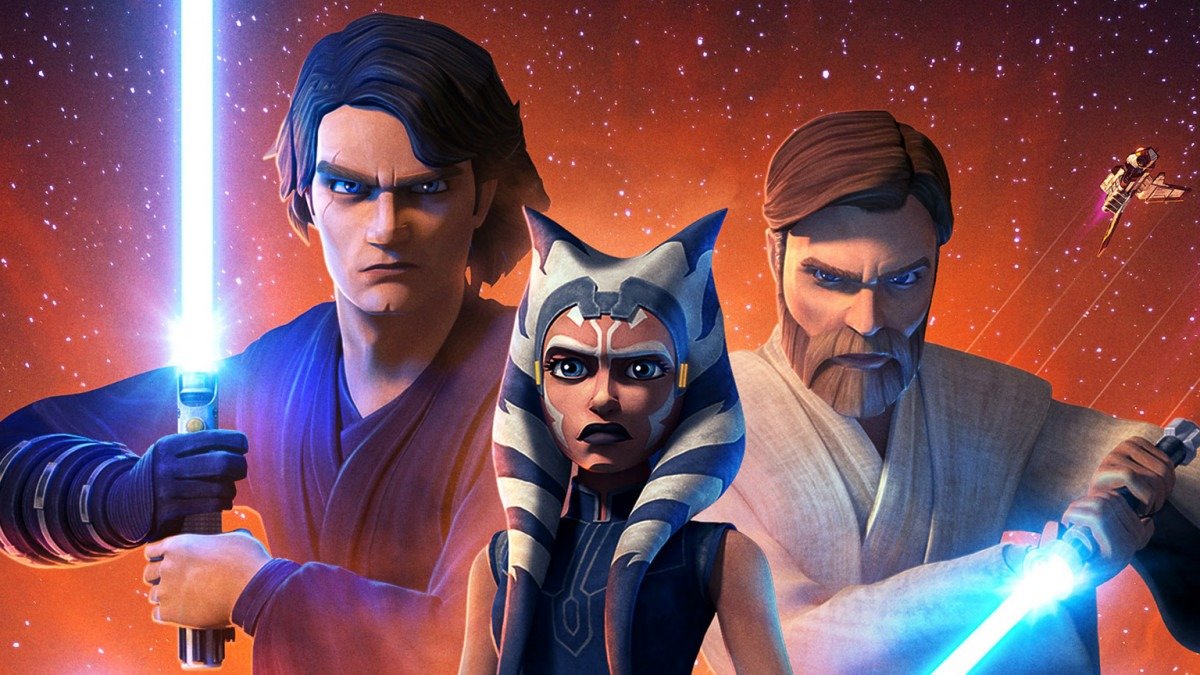 After the mediocrity that was Star Wars: The Clone Wars (2008, my review here) I have finally started to watch this TV show, as I’ve heard it’s much, much better and almost its own thing, compared to the movie. The first episode in and I have discovered something interesting – most of these episodes are anthologies, meaning they don’t necessarily follow chronological timeline, so sometimes you might see things happen/somebody die in episode #2, just for them to live in episode #3. Luckily, there is a handy list (here) where if you want to watch this show (and the movie) in chronological order, you can (and I would recommend it, as it makes more sense to me, especially if it’s, like mine, your first time). Just a tip. 😉

What I need to say right from the start, the fans on the Internet were 100% right. Star Wars: The Clone Wars (the TV show) is actually way, way better than the movie, that’s mediocre, with one eye closed. The main reason for that, is this is the first time where Star Wars property was allowed to expand beyond what we known from the movies (and of course, back when this show started (2008), there were only 6 Star Wars movies) and even though the show had to operate within certain constructs (after all, the show takes place between episodes Star Wars: Episode II – Attack of the Clones (2002, my review here) and Star Wars: Episode III – Revenge of the Sith (2005, my review here)) so you know where things must go and how/where the main character will end up, they made their best effort to make the journey as interesting as possible. As that old saying goes, “it’s not the destination, it’s the journey that matters” or something along those lines.

Just before I am going to get any further with my review, this might contain some SPOILERS, so tread carefully.

Overall, I think this TV show came a bit too early, but only couple of years too early. Why…? Well, except the last 2 seasons, this TV show falls into the same trap thousands of TV shows prior this one fallen into – the filler episodes. And the problem with working with extended universe of Star Wars is, sometimes, we focus on characters outside of the main story for a couple of episodes, that are not that interesting. There are couple of episode about Jar Jar being the hero (I think twice he had at least 2/3 episode story arc, that was quite painful to sit through) and couple of other episodes about droids, really young Padawans etc. Look, is it possible these episodes have their fans and we get to learn a bit more about the Star Wars universe? Absolutely. For example, the episodes about young Padawans getting the crystals for their lightsabers, then constructing them and then being the heroes, did show the “process” of how would you go about getting your own lightsaber, so I can’t say this was wasted time, it’s just… it wasn’t the most engaging peace of The Clone Wars. And you can definitely have these episode, but if you were to condense them into 1/2 episode(e), rather than having them stretch out over multiple episodes, that might help? And this is why I think this show came bit too early – because my guess is the people behind this felt the necessity (or it was just a regular order from their bosses) to hit that “magical” number of 22 episodes per season, where sometimes all we needed was just 16, or 12 episode and we would be fine.

Take the final (7th) season – 12 episodes evenly split between 3 story lines – Ahsoka Tano and what did she do after we’ve seen her last time, those episode were fine. Then we have the introduction of The Bad Batch, that’s more or less just a 4 episode promo for the latest animated Disney+ show, premiering 4/5/2021. And no matter how likeable or cool these guys were, those episodes felt distractive, as they had some link to clones, but we could again do without those episodes, or condense them into 2 episodes max…? And then we actually have the “main” story, the last 4 episodes and those were simply stunning. Visually gorgeous, story-wise it hit all the emotional points it needed and gave us some sort of closure. So even out of the last season, what we really needed was maybe 8 episodes, maybe just 6 even…?

And I guess that’s the only reason I can’t give this show the full marks. For every truly great episode/storyline/character, there is at least one that drags on, in each season. I am pretty die hard Star Wars fan, but even I would sometimes struggle to get through episodes, mainly the ones with Jar Jar as the hero, as they were just… not that great, to put it mildly.

What I need to appreciate are two more things about this show – the animation style and character development. Naturally, as years went on and technology improved, the better each episode looked, where the latest ones look almost nothing like the movie from 2008. Honestly, the level of improvement is exceptional. But even that is nothing compared to the character development, mainly with Ahsoka Tano. If you have only seen the movie (as I have for the longest time) you would really not like her, as she was jut a young, bratty child. But in this TV show, they actually work on her character, where you can see her growing up, maturing and it all happens so naturally, that she feels like a real life character. When I remember how I really didn’t care for her character in the movie as opposed to later stages of this show, it’s totally different character. But again, it’s done so well, the progress felt so natural, you don’t question it, you go along with it, because it makes total sense, that Ahsoka would mature, would see more things, change her opinions, develop her own style. I was really happy with her, and I can’t wait to see what Rosario Dawson does with that character in another upcoming (but this, it’s live action!) tv show, so far called Ahsoka (release date unknown).

Overall, I can definitely recommend this TV show, with a caveat that in every season, there are episodes where you will follow certain characters that you won’t necessarily care about. And then it depends how big of a Star Wars fan are you, because if you are not THAT into it, I would maybe just avoid this show. As I said before, I am die hard Star Wars fan, and even I struggled with some of these “filler” episodes. I honestly think that If you were to cut around 20 episodes, this would have been really, really close to perfect TV show and I wouldn’t have anything negative to say. But even with those still in mind, when this show hits some high moments, it delivers and there are some stunning sequences and chilling moments. After all, it sold me on watching another animated TV show, Star Wars: Rebels (2014 – 2018) so you see that it can’t be that bad. 😉