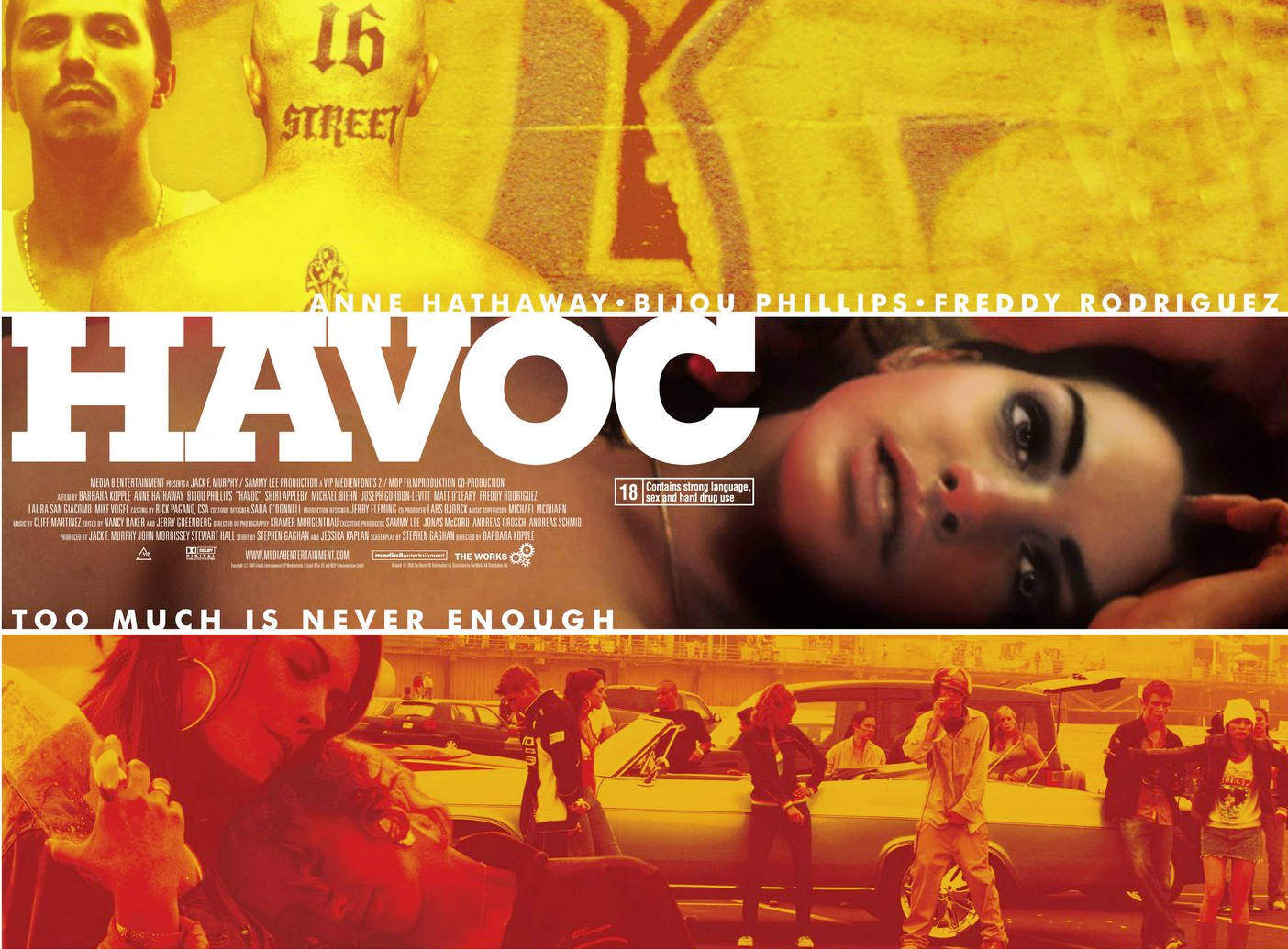 Movies like Havoc are really hard to review. Not because they are so hard to follow, have super convoluted story, or some great idea behind it you’d have to watch the film five times to fully understand/appreciate, no. It’s more to do with the fact that this is one of those “even rich kids have problems” movies, which can be “a bit” cringey. And this one definitely goes to the cringe territory hard (did somebody wanted to imagine, what it would look like, if all white cast acted like the toughest gang ever, acting all “gangsta”? Nobody? Yeah, same.) but at the same time, there is a point to that. Whether it’s good enough (or a new enough) point, that’s up to us to decide.

Havoc is definitely an indie film with some big actors just before they became big (Anne Hathaway, Joseph Gordon-Levitt, Channing Tatum) and it is definitely the first movie, where Anne Hathaway showed us, what she was capable of. She definitely shakes off the “princess” films and is the reason to watch this one, as she is the single reason this movie stays on some sort of tracks and doesn’t go fully into the cringe town. Her character is nothing new under the sun, spoiled, bored, rich girl, who is bored. She does dumb stuff, because she’s young, privileged and doesn’t suffer almost any consequences. But Anne does her thing and somehow, she makes her kind of likeable, especially towards the end. What I also liked about her character was the fact that even though she was everything I’ve just written above (spoiled, bored etc.) and more, she was given two choices to “snitch”. And both times, she refused, and not because she tried to be cool, no. She did it, because deep down, she understood, that what her character was doing, wasn’t right. Especially her second “not to snitch” choice was really impactful, as she had a skin in the game and there were actual stakes for her. Long story short, Anne is the reason to watch and finish this film.

Your overall enjoyment of this movie will be entirely derived from a simple question – whether you can empathize with people, whose boredom stems from them being white, privileged and not happy with their life, so they just try to be somebody else. And somebody else in this instance are black people, because this group perceives them as cooler. And that is pretty much the entire movie – bunch of young, bored students get themselves into trouble, because their lives are so dull, they are looking for that spark, that excitement, that fix. Which we can judge as being just “first world white problems”, because, yes, that’s exactly what it is. But at the same time, I can 100% believe people like this existed and still exist. And if you try really hard not to cringe, especially during those scenes, where they talk to each other, like the members of the lamest gang in the world, and look slightly deeper, you might find a bunch of scared kids, who are still trying to figure out everything.

I have also hit the age (almost 30 now) where I see what’s popular on YouTube or TikTok and can’t wrap my head around it. And of course, naturally, my first reaction “10/15 years ago, when I was that age, my generation was way cooler!” But deep down, the honest truth is – this how it always goes. Most of us can be (and were) really embarrassing while we were growing up, as that’s part of life. And the generation that matured before us, looked at us disapprovingly, saying how more cringe we are, because when they were young… see that circle of life? Every generation believes they were the shit, the peak of the civilisation and once they reach a certain age, when the trends stop making sense, they can’t believe “what these Gen eXers are into”, but are the young people truly much worse than you or I, when we were growing up? No, I don’t think so.

And I think that’s what Havoc is trying to be about. Deep down, underneath all that “glitter”, gang-like behaviour, it is all about just bunch of teenagers, who are looking for something, yet they don’t know, what that something is. Does the movie go about it in engaging way? Not really. As mentioned prior, if this movie didn’t have Anne giving her all to make it work and hold this movie together, it wouldn’t have worked at all. Who I thought also did a great job was Bijou Phillips, whose character goes from intriguing to flat out spoiled fast, but that is who she was underneath. I also liked her fixation (and I think the movie is hinting at more than that) for Anne’s character, how they depicted that friendship and the ultimate “resolution” of that friendship. That was done really well.

Overall, Havoc is definitely a movie, that won’t leave you feeling cold. You will either feel sorry for most of the characters portrayed, or feel an unhealthy amount of rage towards them, for having the means to do pretty much anything they want to, and yet, most of them are still incapable of making any sound decisions. For me, it honestly reminded of a pendulum swinging from one side to another as (I know, I keep mentioning this) mainly the scenes, where they pretend to be tough, “gangsta” and try to talk/look like black people, was a cringe fest. But without those scenes, you wouldn’t have the other ones that give you “access” to some of these characters and what they are all about. Of course that is, if you want to know, if they haven’t annoyed you prior. This might be one of the hardest movies to “recommend”, as it’s not exactly great, but Anne Hathaway is giving a great performance and for what it’s worth, I liked the ambiguous ending. Watch it with zero to low expectations and maybe, you will be rewarded…?