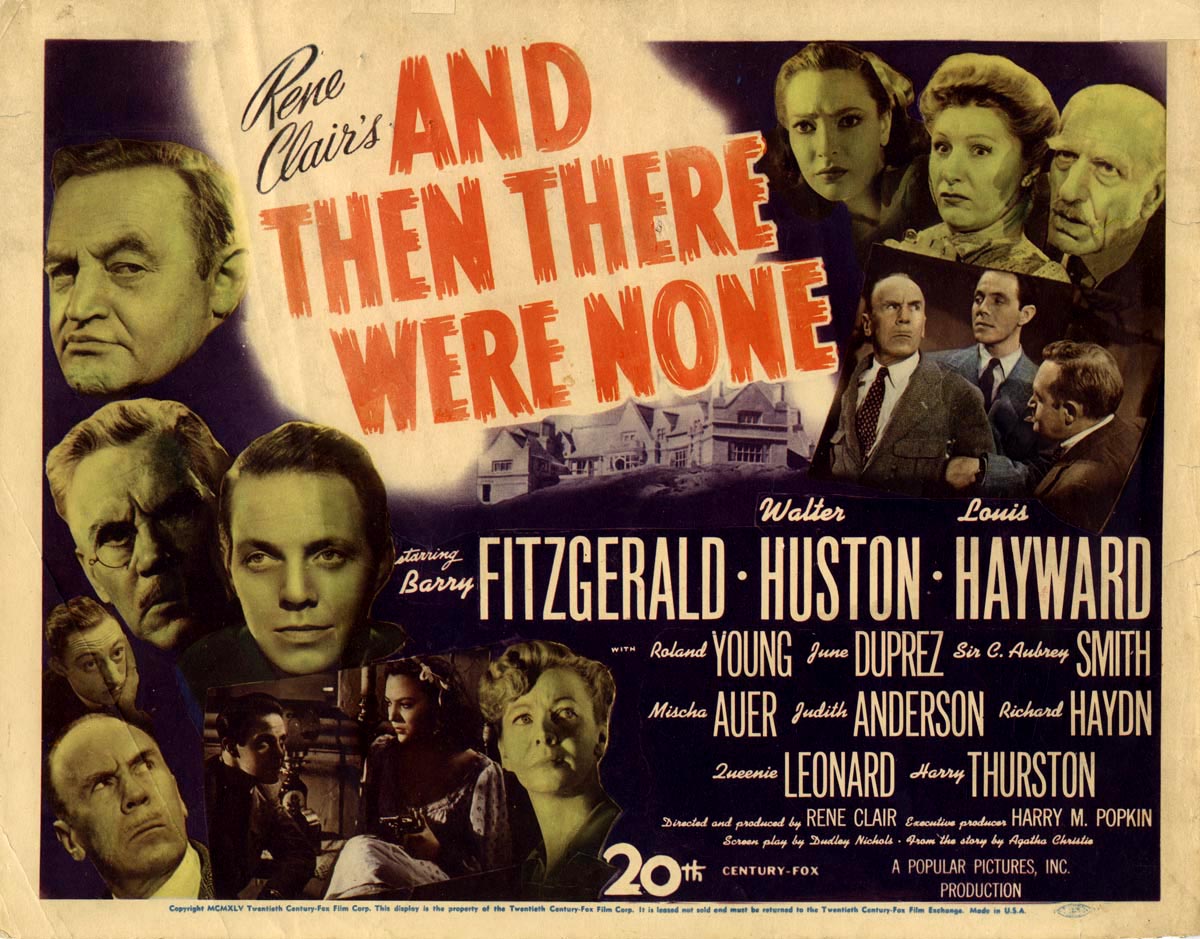 If you enjoy the good old fashioned “whodunit” story, there are only a few better authors than Agatha Christie, respectively movies and TV shows based on her books. With And Then There Were None, it’s hard to enjoy it fully because of two reasons – the fact that once you have seen a few of these films, you know it’s not about “who done it”, more about the journey and how that stacks up once it’s been revealed. With this film, you can’t properly enjoy it because of reason number two – public domain. What is that and why would it affect your movie-watching experience, you ask? Well…

Very broadly – every movie (or piece of art, for that matter) belongs to someone (mostly the creator, or producer(s), who put the money towards it) so they can benefit from it, for almost as long as they are alive. But some of the older films have gone to the public domain, as the original copyright holder failed to renew the copyright claim. Therefore, this film, among some other ones, are now in the so-called public domain – they belong to everybody, so technically everyone can sell them. I know what you are thinking, why is that a bad thing? Well, as much as copyright laws are viewed as something inherently bad or unfair (and they do have their fair share of problems) they also motivate their copyright holder(s) to work on the art, especially if it’s been made some time ago, to modernize it, to take good care of it, so they could further re-sell it. In the case of movies, to invest some money into investigating, whether the copy they have, is the best one if it might be improved upon, cleaned up etc. And since nobody “owns” this movie, nobody took the time and effort to restore a copy of this film properly.

What that means in plain English is – you can go and watch it legally on Amazon Prime Video (where I watched it) and see how bad the film looks like, how the colours are off throughout the movie, how sound is worse than how it usually sounds like with these older films… and that is because nobody (or anybody) can earn money from this, nobody is enticed to look up the original copy of this movie, and try to restore it, try to colour correct it, try to make it better, restore it for future generations.

The movie itself is a pretty interesting “whodunit” tale, with as much overacting as you might expect from a film from that era of filmmaking and the person, who’s revealed at the end was surprising to me, as the movie doesn’t hint it in any way. It lets you guess most of the movie, playing back and forth with you, where everybody is a suspect, but some more than others. And if you know the genre, the “usual suspects” movie wants you to believe are behind this, usually aren’t those, who did the crime. This reveal was pretty decent, but it never felt like it enhanced the film, or made it better…? It left me cold, as I expected something a bit more.

Come to think of it, even if the technical quality of this film was the very top-notch, what I am used to with older movies, I still don’t think I would have changed my rating in a major way, as the more I think about this movie, the more it’s clear to me that it’s a pretty decent film, that walked, so others can run. It’s the paradox of knowing that yes, we’ve gotten much better movies based on pretty much the same story, but if it wasn’t for this film, we might have not gotten those stories. As filmmakers who went on to make the “better” versions, probably watched most of the old ones, took notes on what worked, what didn’t and improved upon it. So I don’t want to judge this film too harshly, as it doesn’t matter it might not hold up 100% today, it definitely has its place, as being one of the very first movies to play around with this kind of story.

Overall, And Then There Were None is an interesting piece of history, that has its problems (the book’s Wiki page is a fascinating read, not just because you will see how many times it’s been adapted, but you will also see the unfortunate original name of the story/book) and should be viewed as such. As an imperfect, yet still significant piece of art history, that had “the core” (whodunit story element, where everyone can is a suspect at some point) right, just had to be re-done (even renamed) several times to get it fully there. And we (and by we I mean modern filmmakers) still go back to that material for tips and tricks, what to do and not to do, if you want to have a successful “whodunit” story. I would say if you are usually intrigued by Agatha Christie or the kind of “there is a killer among us” movies, try this one. Just bear in mind, you might not get a decent picture/audio quality.