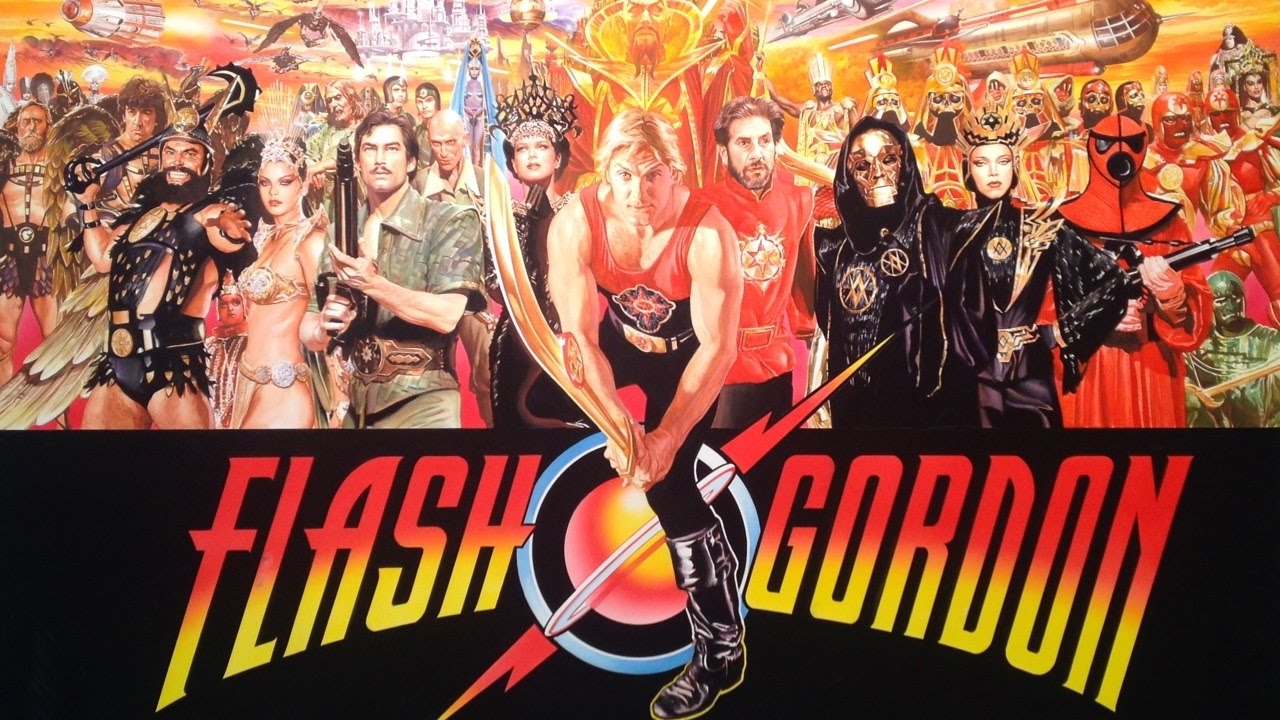 I need to admit something – after everything I’ve heard about this movie, I was ready for one of those cheesy 80’s films that are not watchable today, where I will be bored for most of it. Boy, I was so wrong. This film has surprised me in several instances, where ultimately, I had a much better time than expected. Does it hold up today? Largely, no. But can you still have fun with this film? Absolutely. And the best part? Surprisingly, the pacing.

Where Flash Gordon might lose some points for the laughable CGI (that must have looked fake even during the movie premiere back in 1980), it immediately gains more points for how fast the story moves along. I believe we don’t spend even ten minutes on Earth before we go to space. The story kicks in almost instantly… who cares that it doesn’t make sense? That there is some arbitrary time limit before the Moon will fall apart…? Flash Gordon is a rarity because plenty of times, I struggle with pacing with these movies, as filmmakers “in the ye olde days” usually took their time establishing everything. Not in here though, it honestly felt like we were thrown in the middle of the action from the very start. That was something, I truly appreciated.

Also, I wasn’t prepared for how surprisingly sexy this movie is. For all the talk about how campy this film is, how dated it is etc., nobody ever mentioned the literal harem of women (that belongs to Max von Sydow‘s character, The Emperor Ming) that is “lead” by the stunning Ornella Muti. I have always known her to be a stunning woman, but I had never seen her when she was young (in here I believe she’s around 24 years old) and yeah, what a stunner. Speaking of stunning women, Melody Anderson isn’t too sore for the eyes either. Even though her character is just there to fall for our “all American hero”, Sam J. Jones. And talk about a perfect casting choice. If you asked someone: “How would the most stereotypical American guy from the 1980’s look like?” Sam J. Jones would have been THE prototype. Blond, athletic, patriotic, ready to die for Earth… what else do you want?

Who I also didn’t expect to show up here was Timothy Dalton. If somebody told me he got the role of James Bond based on how charismatic he was in this film, I would believe it. Don’t get me wrong, I don’t think Timothy has a lot to do in this film, but he oozes charisma and charm. And that can be said about most people in this movie. Don’t expect any great performances here. Even usually reliable Max von Sydow isn’t that great in this film, but I wouldn’t blame him or anybody else. You know the movie had some issues when the director Mike Hodges says, and I am paraphrasing here:

Flash Gordon might be the only improvised $27 million movie ever made.

But despite everything, despite the laughable CGI, questionable acting, and von Sydow playing a character called “The Emperor Ming” (again, we can’t judge a movie from 1980 by today’s standards), this movie is still fun to watch and honestly, it flies. I think this might be the best example of “the magic of movies” I’ve seen in some time. Because if somebody were to describe this movie to me, I would be willing to bet this wouldn’t work today. And yet, I had a good time with it. Because of pacing, charismatic cast, killer Queen soundtrack, as let’s face it, music by Queen could improve anything that’s just a fact. But mainly how the movie doesn’t take itself too seriously (at least I never got that impression). Yep, honestly, that surprised me too.

Overall, Flash Gordon is one of those films where it doesn’t matter how many things you might have heard about it because it demands to be seen. This movie is the epitome of “you’d have to be there”. Yes, everything is “slightly” all over the place. Mainly the CGI was out of date even when the movie was shooting, so imagine how laughable those effects look today. But there was this level of honesty, something, that said: “Hey, we know how this looks, but we are trying our best.” I can’t put my finger on what exactly made me feel this way, but that’s “the magic of movies” to me. Sometimes, a film shouldn’t work at all, and yet, despite everything, it kind of does. And what I mean by that it’s not a total disaster. I want to make it crystal clear Flash Gordon isn’t some “forgotten masterpiece”, no. But if you watch it expecting a bore-fest, you might be in for a surprise. At least I was.