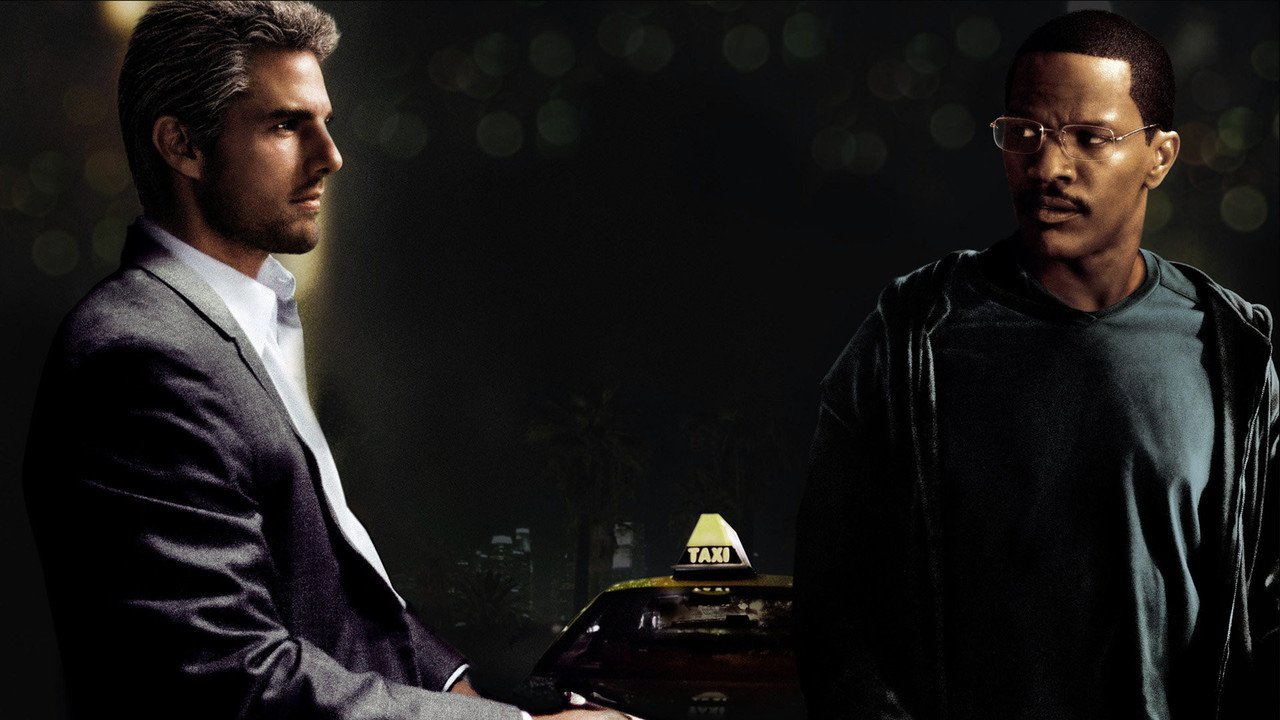 Collateral is one of those movies I have watched a long time ago (I believe around 2005/06) and haven’t re-watched until now. And yet, it stayed with me. I still remember the impression the movie made on me, but back then, I couldn’t word myself as well. Now, I’ve introduced this to my girlfriend. And while re-watching this gem for only a second time, it dawned on me why this stayed with me for so long. This movie is just a pure anxiety-riddled ride throughout, and when people discuss Tom Cruise, they barely mention how great of an actor he is. He rarely plays villains, but in this movie, you can see for yourself that’s a shame for us, as he kills. Not only a lot of people in this film but this role. With all respect to Jamie Foxx, who also excels in this film, it’s Tom, who steals the movie.

What’s fascinating is this movie could have easily been a failure. Because if you think about it, the story couldn’t have been any simpler! A hitman “hires” (that word does a lot of heavy lifting) a taxi driver to chauffeur him around while he’s… let’s say “running errands”. Most of the time we spent in a taxi cab with two actors, cameras on them, that’s it. And yet, in the hands of Michael Mann (looking at his filmography, this is his last truly great film. I hope he will make a comeback soon.), this turns into something more. Yes, some scenes are more expected than others, like the eventual meaning of life debate is on the schedule, followed by how both of these guys have their faults and can be hypocrites. But the film knows when to stop and shift into another gear when needed. And more importantly, it knows how to keep us at a level where we feel like something big might happen soon. And it doesn’t come. But maybe, the next minute…

We need to talk about the already hinted performances by both gentlemen here. Because the movie is purely about those two actors. Let me start with Jamie Foxx as he gives a solid performance, no doubt about that. You know everything about his character you are rooting for him. That makes it easier to believe him when he eventually snaps because he nailed that part. His only “downfall” was sharing a screen with Tom Cruise at one of his best performances. What gives the extra edge to his bad guy, more than other ones in recent memory, is how uncomfortably believable he makes him. Cruise has always been fit, but never “too fit”, never too buff. He looks like your average guy, talks like your average guy, and that is what he utilises in this movie. His hitman looks like somebody who can easily lose himself in a crowd full of people. Someone who always stays calm as he is constantly a few steps ahead of you. And he knows what he needs to do to kill you. And the most chilling part about all this is he is someone who still has “the charm” of Tom Cruise and uses it to his advantage. When comes to debating the best villains in movie history, some characters are given, like the Joker or Darth Vader. I think it’s time to throw a new name into the mix because he deserves to be there – Vincent. I don’t understand how Tom didn’t get nominated for an Oscar, but Jamie Foxx did. I am not saying he didn’t deserve it. But when you finish this movie, you won’t be thinking of Jamie.

Also, it’s always fun to see people appearing in a film you forgot they were in. And we have some big “before they were properly famous” names, like Mark Ruffalo or Javier Bardem would be the biggest ones. Fans of Prison Break (2005 – 2017) might be happy to see Wade Williams and Paul Adelstein. And in a super short cameo role, Jason Statham (who is presumed to play his character from his Transporter series). But don’t get too excited about any of these. Even Jada Pinkett Smith, who got the third billing in this film, isn’t there for too long, as this film is really about those two guys who met on that one faithful night.

There is one thing I love when films do. And Collateral does it so well, without pointing it out. I love when movies take place over one day, or in this case, one night. But where other films would have a character say something along the lines of: “Damn, what a long day/night this has been.” to “rub it” in our faces, this film never does it. It doesn’t need to, as we are aware of it, just by looking at our main protagonists, how tired they are towards the end. More movies like this, please.

Overall, Collateral is a film like no other. It’s a thriller that keeps you at a certain level of suspense for most of its runtime. And depending on how sensitive or not you are to anxiety, you might or might not realise that level is slowly increasing throughout the movie. Films like Collateral aren’t just something you can pop in anytime you want. You need to be in a certain headspace, in a certain mood to fully enjoy it, in my humble opinion. And if you do and you watch it at the right time, you will be exhausted afterwards, but the “good exhausted”. Like after a great workout session at the gym, but mentally. It’s one of those films that everyone should see. If for nothing else, let this be the brightest of examples, that given a chance, Tom Cruise can act and not “just” be a movie star.