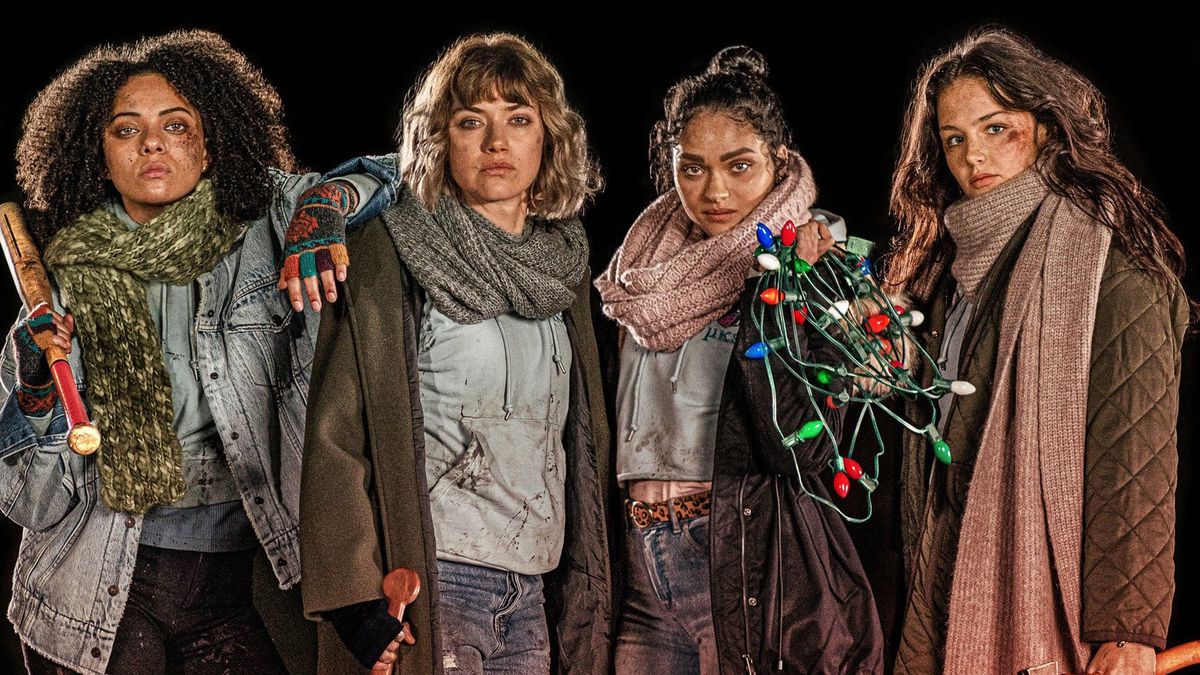 Oh, Jesus-tap-dancing-Christ. Where do I start with this? Ok, first things first – whenever I find out that a movie is a remake, I try to watch the original first, to see what has been done where, what was improved, what wasn’t, you know. So I went into this film right after watching the original Black Christmas (1974, my review here). And I have praised the original movie for being a gem that helped establish plenty of rules for horror movies to come while having a great, albeit not-so-subtle feminist message. This remake is, unfortunately, the exact opposite of that. The clichés are used in such a lazy way, you can see every single twist from a mile away (except for the dumbest twist, but I will get to that), and the feminist message here was… let’s say more than in your face. A lot to unpack here…

I can’t discuss much without going straight to spoilers, so I do apologise, as usually, I try to sum up a film at least a tiny bit before going into the spoiler territory. But plenty of things that are bad with this remake are so intertwined with the main plot I need to jump there pretty much straight away. Let me just say that the only thing this remake has in common with the original from 1974 is the name and the setting (sorority house). Everything else is different. That might make you think something like: “Hey, that’s great, at least the remake is trying to say something different and isn’t copying the original!” Sure, but where the original helped establish the horror clichés, this one felt like they gave in to them, focusing solely on the message. That would be fine if the message wouldn’t be so black and white. Ok, without further ado…

Black Christmas starts like your stereotypical horror film. We have a murder within the first five minutes. Fine. Except this is where the movie shows its hand for the first time – the killer is not “a shadow” we never see, like in the original, but a masked, hooded figure. And since it moves way too quickly, you realise almost instantly – ok, there are multiple killers.

Which is fair enough; after all, plenty of horror films made that work, albeit they didn’t tip their hand in the first five minutes. But ok, moving on. The movie consists of plenty of cheap jump scares (something the original managed to avoid), but I understand that unfortunately is the “norm” nowadays, so I can’t hold that against this film too much either. But there is no underlying tension, no horror atmosphere whatsoever, as it gets overshadowed by this movie’s “in your face” feminism and the (men) characters being so black or white you swear you are watching a film from the 1920s.

Look, a lot of great horror movies comment on political issues. But, and this is huge but, they do it subliminally, via allegories or metaphors. They don’t do it by effectively taking a megaphone and shouting at you for an hour and a half. Because that is what I remember most, and that is how I felt while watching this film. The men characters here are either really useless/weak or the worst possible men you’ll ever meet. The thing here is I could even understand why if there wasn’t the supernatural element. I know what you are asking: “Wait, what now? What supernatural element are you talking about?” Oh well, that was the only “twist” I didn’t see coming because it was so dumb.

In a nutshell, the movie mentions in the beginning how the school’s founder was this awful guy who might have been involved with some dark magic. He was so bad they removed his bust someplace else, so it wasn’t as visible. And while moving the bust, somebody noticed there was a black goo leaking out. Someone also discovered (how?) that black goo “unleashes the alpha male”. Yep. And that infects you (aka fraternity guys) so much, they don’t bleed blood anymore; they bleed the black goo. And the founder is also alive, somehow, or his spirit…? Yes, this is something that the movie hints at towards the end; there is this massive (boss) hooded figure in charge, but never explained how, why, who…?

And here’s the thing – I don’t have a problem with “supernatural” elements. Or black goo that turns people evil. But in your horror/political movie, that’s all about how men are evil creatures – doesn’t the existence of black goo go against it? As the fraternity guys are infected by the black goo, how are they responsible for what they do under its spell? To me, that’s a massive misstep in the film, as it almost shifts the blame from the men to “they were only evil because of the magic black goo, that was somehow preserved in this bust of the evil founder of our school”.

I know, there is a trivia on IMDb trying to give us an insight into this:

The black goo that the fraternity brothers bleed is meant to represent literal toxic masculinity and how it affects men and changes them from humans into monsters. It was also used because they were not allowed to show red coloured blood in a PG-13 rated film.

But for my money, the film is trying to be too clever for its own good. Sometimes, the clearer your point is, the better it works. This movie is a prime example. It would have worked much better as a movie, let alone a horror movie if there wasn’t any evil black goo. Whether it represents something or not.

I swear this movie went from “average, slightly more in your face movie” to “batshit insane” with that supernatural element. I wish the people behind this film would have just left it out completely, and that would have improved the movie instantly. And better yet, maybe don’t make the main villain (Cary Elwes, who is much better than to be in this film, but I could say that about any actor/actress in this) the obvious one. How great/unexpected would it be if Madeleine Adams (who plays Helena, who is revealed as a traitor to her sisters) would be the “main boss” behind this? How more interesting/nuanced the story/the message could have been?

From the main cast, I need to talk about Imogen Poots. She was perfectly fine in her role. But same as Cary Elwes, she is much better than to appear in this film. I “liked” (the quotes are there because it’s hard to say that I liked a rape story) how her storyline was dealt with and how the “sexy dance” routine turned into this fuck you to the frat guys. If only the movie had more genuinely surprising scenes like this.

And to prove I am not some “not all men” or some sour person, I will give you a perfect example of what this movie could have been. But it’s not based on my views (because I do need to admit, I am but a white, straight male), no. If you want to see a movie that is out there when comes to these issues and knows how to portray characters well, how to tell a story in a superb way, where it stays with you for days to come, please do yourself a favour and watch Emerald Fennell‘s Promising Young Woman (2020, my review here).

The more I think about it, the more I am sure both of these movies are pretty much identical. Except one is superb, and one just “is”. One portrays very well how it is to be a woman in the man’s world while not being condescending but, at the same time, giving zero fucks. The other film shouts at you. One has characters (even some male ones, so it’s not that difficult) who are complex and all in their core flawed to some extent. But some are more flawed than others. The other film has a “girl power, fuck yeah!” thing going on that doesn’t work because it doesn’t feel like part of the story. And I could write like this for days, but instead of wasting your time and mine, I shall repeat – please, do yourself a favour and watch Promising Young Woman. It might not be a horror movie per se, but it’s so close to being a horror film it’s that much scarier than this movie.

Overall, Black Christmas fails on all accounts. It fails as a horror, as it can’t scare you without cheap jump scares. It fails as a political movie, as there is no depth to almost any characters, beyond “girl power!” for most of the women and “I take ages to invite a girl out” or “I will fucking rape/murder you” for men characters. It fails with its many twists, as most you see coming from a mile away (if you ever seen a horror movie or two). And the one that you don’t see coming is just so dumb you are left to wonder, why does it have to be there? But, most importantly, it fails as a remake of Black Christmas. A movie that helped defined the genre and actually had something to say when comes to feminism. And it didn’t need to shout at you.