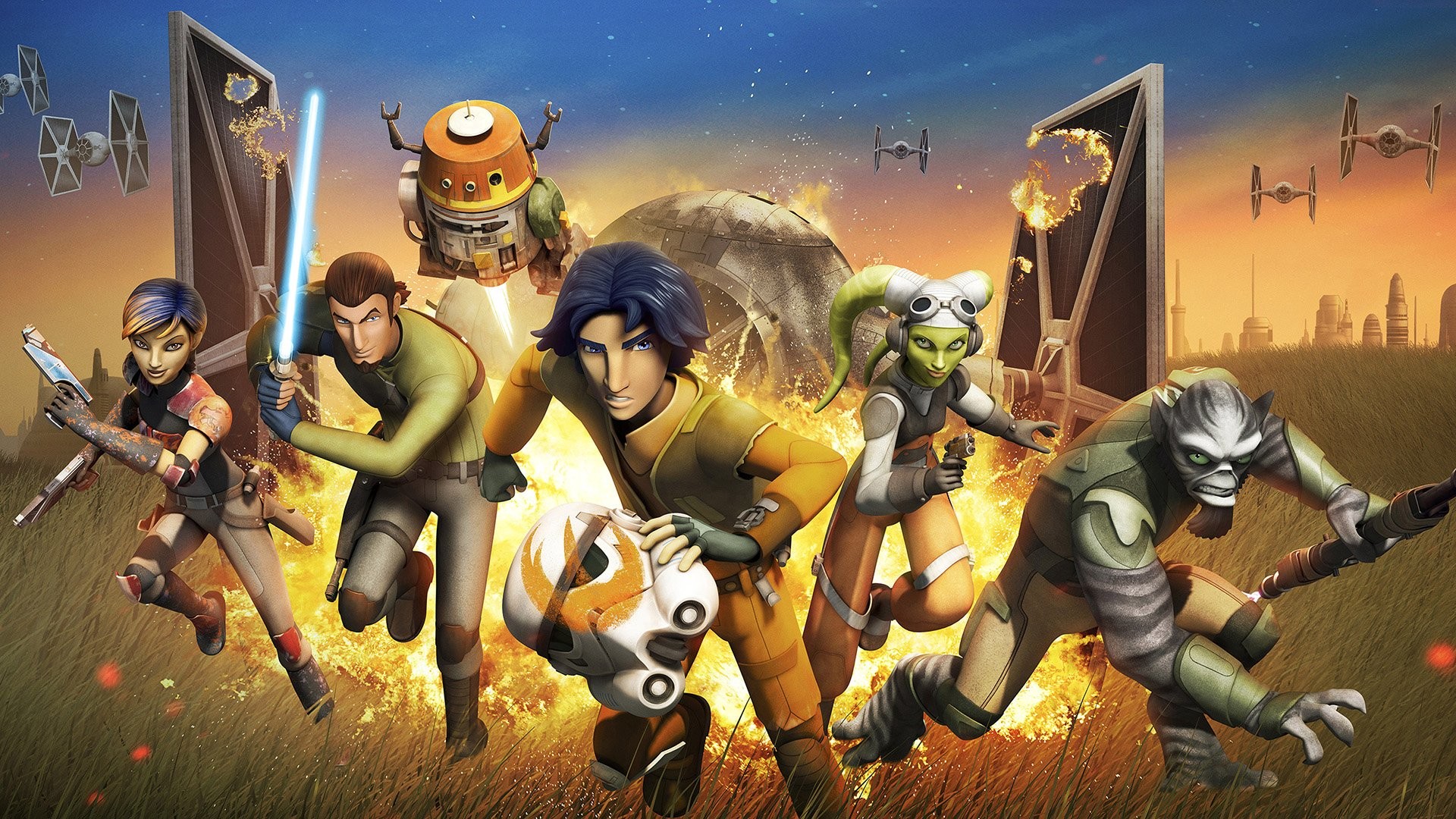 After finishing Star Wars: The Clone Wars (2008 – 2020, my review here), I went ahead and said to myself I might as well commit to the rest of these animated shows. So I have started to watch Rebels and was delighted with the first couple of episodes. Because they didn’t seem to rely too much on the movies or anything else. Sure, we’d still get some characters from the Star Wars universe, but that was expected. But then, a lot of episodes seemed really tailored towards kids. That is when I started having my doubts about this show. However, I have committed and stayed for the entire run of it, and I need to say one thing – thank Yoda, I don’t rate these shows after each season.

Star Wars: Rebels is more kids friendly than its “predecessor” Clone Wars if you can even call it a predecessor. At least, the first two seasons were. Sure, you get the darker episodes every once in a while, but the show is more colourful and animated, which is something I will address separately later on, as I have my thoughts on the animation style. That is not necessarily a bad thing, but you know, you’d think they would try to appeal to a wider audience of Star Wars fans. But then, that’s when it happened – season three and mainly season four were great. They still managed to conserve the lightness, but it started to get more and more serious. And the last couple of episodes of the fourth (and final) season were not only awesome, but they could change how we understand this universe. But of course, we can’t discuss it without going to some spoilers, so…

But before going into the massive spoilers, let’s start from the beginning. I loved our main heroes; all the voice casting felt right from the get-go. Who I need to give a special shout out are Vanessa Marshall and Tiya Sircar. Both from different reasons. Vanessa felt like the perfect “mother figure” to not just the young Ezra but to the rest of that crew. Her line readings always came across as caring and kind, but you didn’t want to get on her bad side. Plus, she was one of the best pilots the galaxy has seen, even acknowledged by her opponents a few times. And Tiya’s voice just felt soothing, strong and feisty, just like her character Sabine. To me, she’s had the most intriguing character backstory out of all of them, and Tiya’s voice always resonated with me. Both actresses, my imaginary hat is off to you.

I admire how this show dealt with our main hero, Ezra and his path to the Force. Yes, they had to go to “will he/won’t he” go to the dark side, as with literally every single Jedi character, who has ever appeared in the Star Wars universe, but I was glad to discover, we didn’t spend a lot of time on that subject. That was one of my main worries – this entire TV show will be about him being trained at first, then he betrays them, then they will try to convince him to go back to the light side of the Force… but no. Again, it’s definitely there, the show did deal with it, but it’s never this over-arching thing. Even towards the end, when Ezra is tempted by the Emperor himself, I knew his character well enough to know he won’t break.

Let’s discuss Kanan Jarrus, Ezra’s mentor. At first, I thought he was pretty decent. Once the show decided to make him blind, it seemed like an interesting choice. Until you discover it only “truly” affects him for an episode or two, and then “because of the Force”, he can feel things around him and therefore effectively see. That seemed like a bit of a cop-out, but at the same time, I understand that you can’t just disregard one of your main heroes halfway through the show. But then, when the fourth season happened, and you see his character’s back story, see him grow, to the point he sacrifices himself so others can live… That I didn’t expect. And what was so great about it, it totally worked the way it was supposed to work. You felt the loss. You understood why he had to do what he did. Also, they didn’t try to cop-out. They straight up killed him, no possible way he could have escaped or survived. I admire that every time a show has the guts to do that. As it is becoming less and less rare nowadays; for characters to not only die but to stay dead for good.

As I alluded to before, the moment when I really started to enjoy this show was around season three. And the last couple of episodes of season four, I have binged. Once they got to the Force thing, how you could travel via Force, and even alter the past… I honestly wish we get to explore this more in some other Star Wars show. But not with the “Skywalker” timeline; please leave that alone. There was also one more reason I started to enjoy this show more around season three, and the fans of this show will know who I am referring to – Grand Admiral Thrawn, as voiced by the brilliant Lars Mikkelsen.

He is more menacing than Darth Vader to me. Yep, I said it. Sure, he won’t Force-choke you like Vader or won’t pull up his red lightsaber to split you in half. But that is because he doesn’t need to do that. He will beat you because he is smarter than you. He is a brilliant tactician who is ahead of pretty much anybody at least ten steps. He never lets his guard down; his deduction game is so strong, it would make Sherlock Holmes blush… And most of all, his calm, always polite demeanour is chilling. Lars is chewing up the scenery with every line reading without overdoing it. It would have been so easy to try and voice this character over the top, but he never goes there. His vocal performance was pure perfection. If we were to get General Thrawn in the Ahsoka (unknown date) show, and since she’s already mentioned him in The Mandalorian (2020, my review here), the chances of him appearing are high, I want nobody else but Lars to play him. Put in him in all the blue make-up you can get your hands on, pay him anything he asks, and he will deliver one hell of a performance.

What took me the longest to get used to was the animation style. At first glance, it doesn’t differ that much from the Clone Wars; but there are differences. And mainly, and I know this will come across as petty, the lightsabers looked off. They are so thin they look like toothpicks. I understand that this was done on purpose see below:

And I admire the level of detail and thinking that went to that I truly do. And you will eventually get used to it, but I am not going to lie every time in the early episodes, when there would be a lightsaber, it would seem off. Sometimes, not everything is better just because “that’s how they had it in the original movies”. But it’s not a big gripe. And, minus the strange lightsabers, the animation style is stunning, and some sceneries are simply breathtaking.

Overall, Star Wars: Rebels managed to convince me that this isn’t just a kids show. And I am so glad I stuck with it. The show tells its own story without heavily relying on most of the existing Star Wars properties. But every once in a while, they will remind you the characters you know and love are still out there, and I applaud them for that. Plus, this show managed to surprise me several times when handling some plot points and even gave us a window into the Force that I had never seen before. If you are a Star Wars fan, I would watch it with little expectations and stick with it; it will pay off. I think I will be more than happy to revisit this TV show at some point, some time from now.