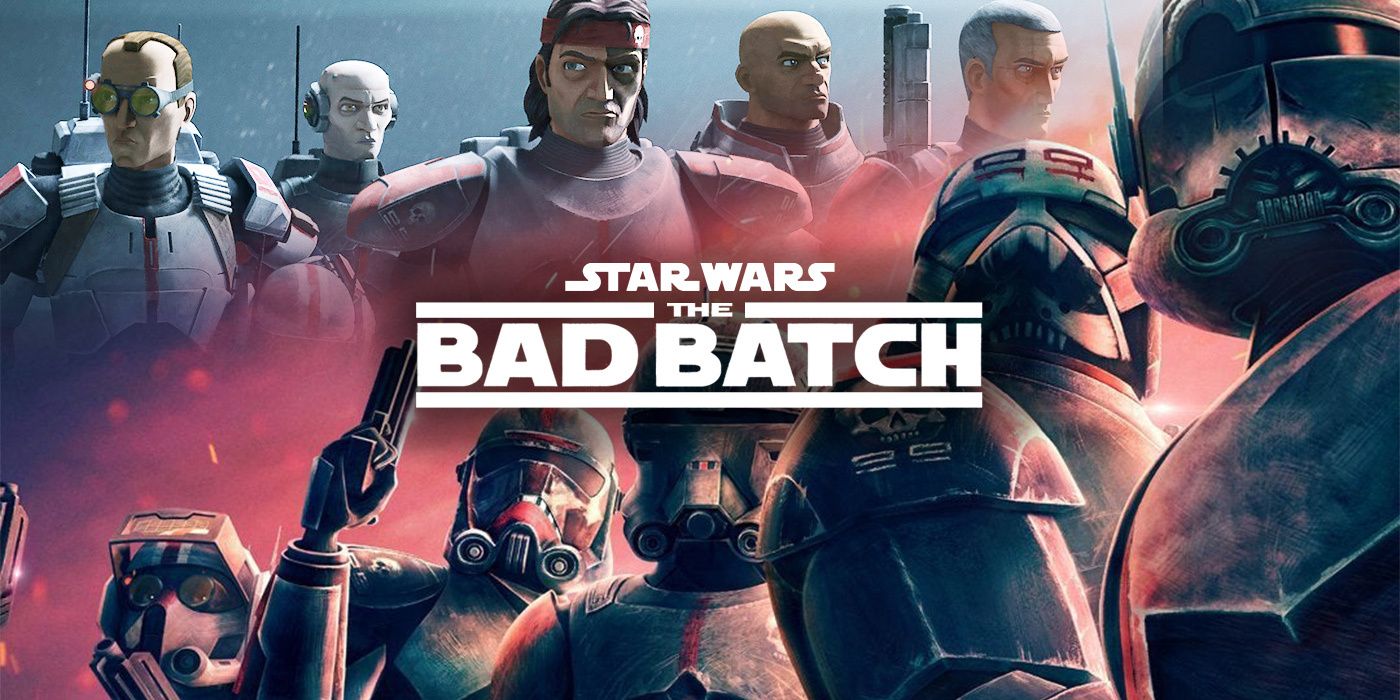 If you have ever visited this blog, you know I have a weak spot for anything Star Wars. You can call me a simp for them, and it would be harsh, but also kind of true. So it was only a matter of time before I got around to watching the latest animated Star Wars show, The Bad Batch. The reason I wasn’t in any major rush to see it was simple – even in Star Wars: The Clone Wars (2008 – 2020, my review here), my least favourite part were the Clone stories. First of all, I know they try to differentiate them, but they all look the same to me, and I often forget who is who. What doesn’t help is the fact they are all voiced by the same actor, Dee Bradley Baker (both in The Clone Wars and in The Bad Batch). And I had the same issue here to an extent. Because the people behind this show made choices to make them all different builds (one is bigger, one is slender and tall) and “colour code” them. That definitely helped. But mainly, there are only so many stories you can squeeze from following soldiers around without leaning more into Jedi’s lore. And that was my biggest issue with this show – sometimes, you’d marvel at the outstanding animation while simultaneously being bored.

Let’s start with the positives. The Bad Batch is by far Disney’s most stunning animated Star Wars show to watch to date. Often I would find myself amazed by how almost photographic everything looks. Especially the environment, seeing it without any sci-fi elements around, I could have been fooled into thinking that this might have been a live-action show or movie. It looks so stunning.

Since I have already mentioned his name, Dee Bradley Baker has done a great job again. He is trying to give every soldier/stormtrooper a different voice and personality. The creative people behind these shows hit the jackpot casting him when all these shows started with The Clone Wars and him being “the voice” from 2008. I also need to mention the other (new) character, Omega, voiced by Michelle Ang. Her voice is by far the most unusual one across any Star Wars films or TV shows made to date. Michelle has a really strong New Zealand (?) accent that I am not going to lie; it took me a while to get used to. But once I have (after a couple of episodes), I couldn’t imagine anybody else voicing the character and doing such a great job. Omega is a perfect balance to the toughness presented by our Troopers, and it’s the one character who goes through the biggest development in the series. She becomes self-sufficient, fighting bad-ass, and I thought her character worked well with the rest of that group.

What I also appreciated were the callbacks to other characters from previous TV shows, like Star Wars: Rebels (2014 – 2018, my review here), and by callbacks, I mean you might spot some of the characters when they were younger (as The Bad Batch takes places before Rebels). I appreciate the attention to those tiny details that make these shows feel more connected.

My biggest problem with this show was that I never got the love these Clones got from the fans. That might be more of a personal preference, but they always felt like the most “normal” component of any Star Wars movie or a show. They are just soldiers with different uniforms and laser guns. And unlike Jedis or even bounty hunters, there isn’t much for them to do that can feel unique. Yes, they explore new, stunning worlds, they get to meet different races, but at the end of the day, most episodes felt pretty formulaic. Either they needed to save somebody or fight their way from someplace. Or both. And if you enjoy that kind of show, that’s great. The Bad Batch would probably be a show for you. But so far, after one complete season, I can say this is the weakest Star Wars show I’ve seen yet. That is still pretty good; visually stunning and at places entertaining, don’t get me wrong. To me, it’s the formulaic approach, where most episodes blend in for me, and except for the finale that did something interesting, I couldn’t name one standout episode from this show.

Overall, your enjoyment of The Bad Batch will directly correlate with several things. Whether you’ve seen any previous Star Wars shows (because this one 100% requires you to watch at least The Clone Wars first), how much you enjoy and can connect with the Clone Troopers and whether you like more formulaic shows. If you said “Yes!” to most of those, then this might be for you. But if you are like me (a Star Wars fanatic who is fascinated with everything but the Clones), you might be slightly bored. One thing I need to mention again is how stunning this show is. I could recommend you to watch this show purely on the stunning visuals alone, especially if you have a 4K TV where you can see all those spectacular visuals in detail. It will be interesting to see whether the second season will be any better.