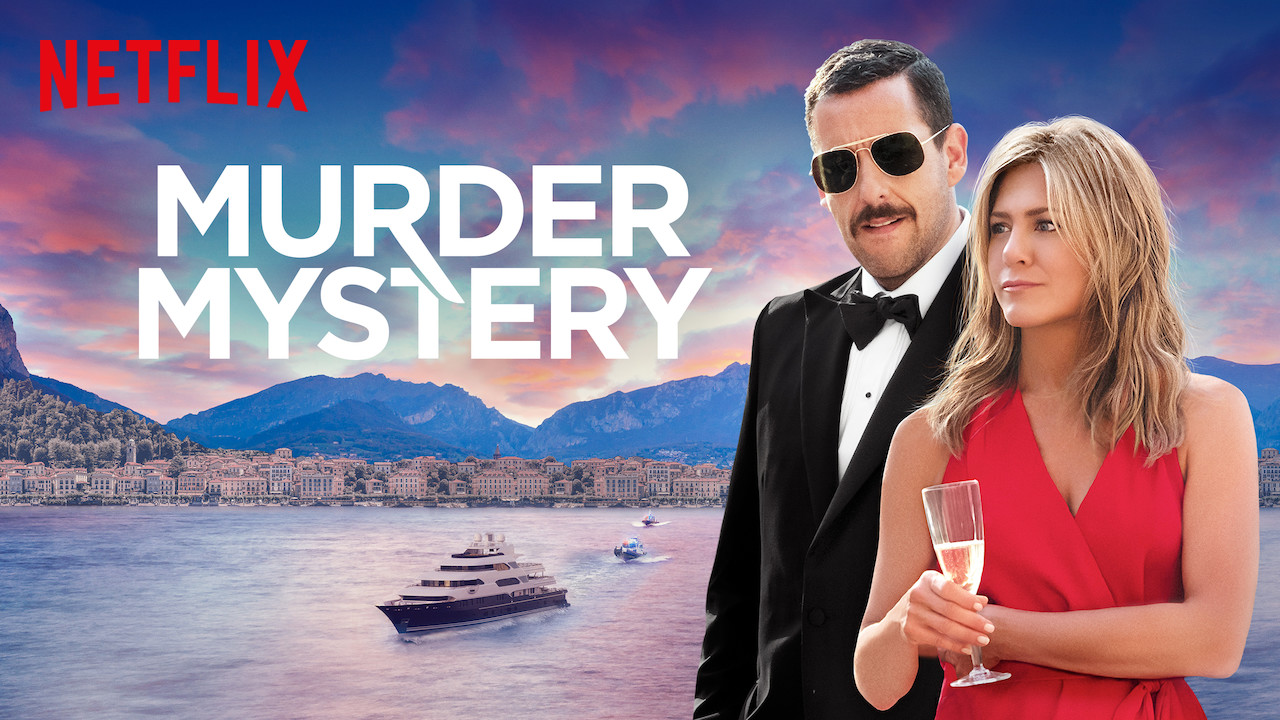 It’s easy to come at Adam Sandler for making movies like Murder Mystery. But aren’t we missing something obvious? If you think about it, he’s making his living pitching ideas for films, based on one simple thing: “Where haven’t I been yet? I want to travel there, so let’s make a film that fits it; we can worry about the details later on.” And if you look at it like that, he kind of “won” in the game of life, didn’t he?

Murder Mystery seems intriguing enough at first. His paring with Jennifer Aniston works as well as it had worked in Just Go with It (2011), but even that is not enough to lift this movie somewhere higher. The plot of this film, where they try to have a murder mystery going, is appealing at first. Until it gets convoluted, frankly, boring, and something like that shouldn’t happen with such a great cast! If you have Luke Evans, Gemma Arterton, or Terence Stamp at your disposal and the movie is still just “meh”, something failed.

Is it possible that Sandler became such a big star nobody can tell him no? So anything goes? Because that is how this movie felt for most of the time. I get it, Sandler’s character should be this disruptive, possibly out of his depth guy who means well, but even that could be portrayed less annoyingly. At times it genuinely felt like Sandler was actively trying to harm this movie. And believe it or not, I actually like quite a few of his comedies, and I don’t mind him as an actor. But looking at his filmography, it’s been over a decade since he starred in a comedy that was better than just average. I have always had this feeling that Sandler has a massive amount of energy and comedic wit, which, if channelled properly, could result in something funny. But lately, it seems like he forgot to “transmit” it, or he doesn’t work with people who know how to “use” him…?

I’ve mentioned the stellar cast, so let’s talk about them. Luke Evans is, as always, solid as a rock. He has always been type-casted in these supporting roles, and I always wondered whether he has got something more in him. I believe he does, but I have yet to see it. Gemma Arterton is playing precisely the role this movie requested her to play – sex on legs. And she does it so well, as she is a stunning and charming actress. And Terence Stamp has more of a glorified cameo in this movie than something you could call a proper role.

The film itself isn’t “bad” by any means – it’s paced well enough, the mystery element works to an extent (until it gets too convoluted to surprise you), and it’s not something you’d be suffering through while watching. But believe me, when I say you won’t remember anything from this film in one week. There isn’t anything standing out – not a single performance or action set piece or “incredibly funny” scene, everything kind of… exists here. I think this might be the perfect description of Adam Sandler’s comedy career at this moment, we are all aware of it, but it’s not something that would stand out (unfortunately).

I wish Sandler would feel the need to challenge himself more and step out of his comfort zone. Because we all know every once in a while, he makes a movie like Uncut Gems (2019), where he shines. And not only did he deliver an outstanding performance, but he did it so well most movie fans were genuinely surprised with the fact he wasn’t nominated for an Oscar that year. And that goes back to my theory about him “winning” the life – maybe he simply wants to exist? Maybe he’s content with what he has (and it’s not “little” by any means, he could stop working altogether, and his children’s children would still be sorted out financially) and does the bare minimum to get by? Honestly, I don’t know because I don’t know the guy. But only a few mainstream actors have such an intriguing career as he has.

Overall, Murder Mystery is the perfect definition of a film that “won’t offend anyone”. What that means is – you will watch it, you might chuckle at times, you will kill slightly over an hour and half of your life and won’t feel too “disgusted” with what you’ve just watched. But you won’t also remember it in a couple of days. Is it worth watching it? If you like Sandler’s style of humour and his pairing with Jennifer Aniston and don’t mind the fact this is yet another “taking a vacation while shooting a movie” Sandler joint, then yes, you might enjoy it. If that doesn’t sound like your ideal form of entertainment, you might want to avoid this one.