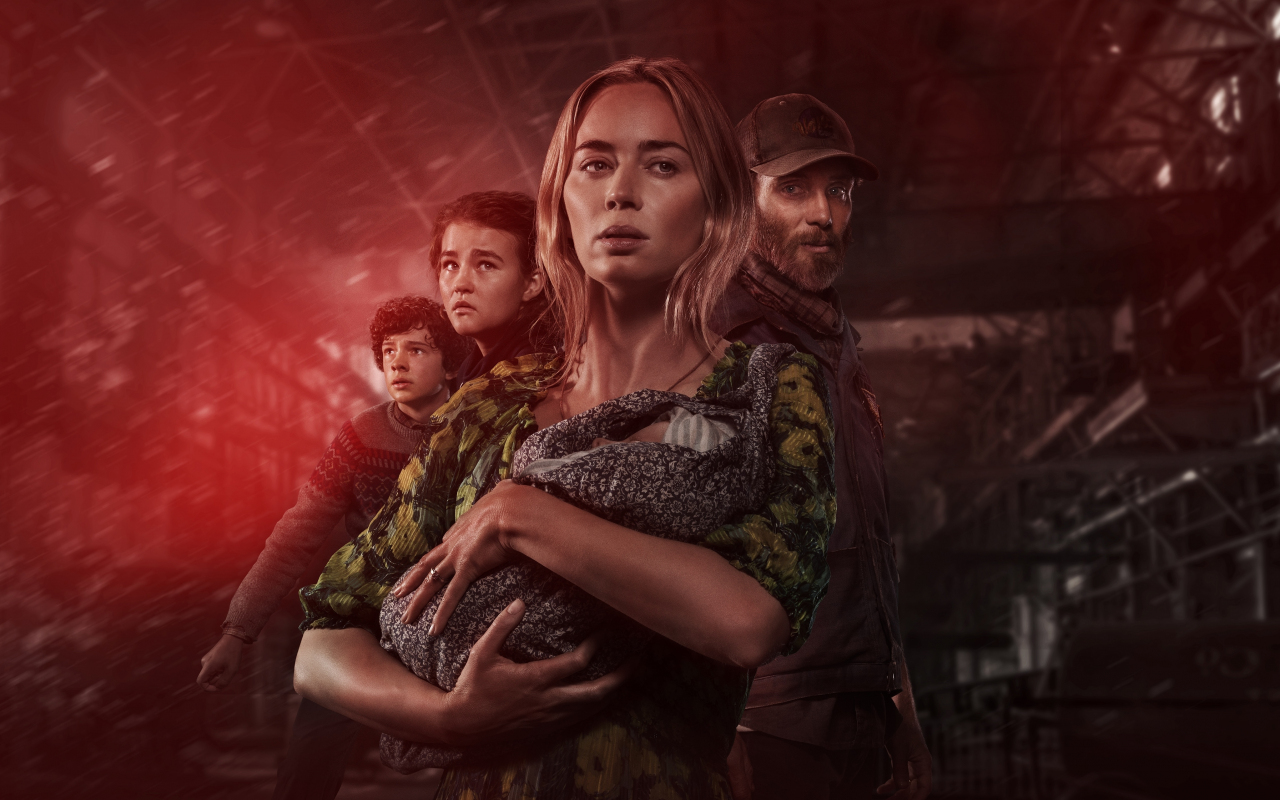 After the pleasant surprise that was A Quiet Place (2018, my review here), I remember thinking – does this film need a sequel? And before we go any further, there is a difference between “does it need a sequel” and “can I imagine more films from this world” because the answer to me differs. Sure, a post-apocalyptic world, where the only way to survive is not making any sound, of course, you can make a lot of movies within that world. But did the surprise hit, which had a clear beginning, middle and ending, really need a sequel? Even after watching A Quiet Place Part II, I would still say “no”, even though I enjoyed this. It doesn’t make sense, does it? Ok, let me explain.

It all boils down to elements you can’t control, and this film is the perfect example of that. Yes, the actors and people behind that film were great, and that hugely contributed to the overall enjoyment of the first film, but the biggest reason that film worked was the element of surprise. Nobody expected the first film to be as superb as it was. I think even Bryan Woods, Scott Beck or John Krasinski (the people behind the script for the first film) didn’t expect the movie to have such a huge success, both critically and in the box office. On a budget of “only” $17 million, the movie grossed (worldwide) $340 million, so that’s a pretty great ROI, and the film was universally beloved. So, of course, we had to come back to this world because it wouldn’t have made any financial sense for them not to.

Hence this film, A Quiet Place Part II, was born. And to be honest, I think this probably is the best sequel we could have gotten. The movie feels larger than its predecessor but not too big, so it doesn’t feel different. There are some surprises and choices made that I liked (more about that soon). But also, some cracks (albeit tiny) started to show. For example, more unnecessary jump scares than in the previous film. The film also follows a more traditional “cookie-cutter” structure, as far as how and where the story goes; it won’t surprise you that much. And it’s all about the kids rather than adults, which is fine as those kids are great actors. But that also means putting Emily Blunt on “the side”, and nobody puts Emily in the corner! Shit, wrong movie…

Ok, let’s start with the things I liked. Without going into heavy spoilers, I enjoyed how this film didn’t go (most of the time) for the obvious choices. For example, from the trailers, I was afraid that Cillian Murphy is only here to be one of those cliché post-apocalyptic characters at this point, where he’s much worse than the monsters. And I am happy to say that no, he isn’t. The movie deals with those a bit, but it could have easily made him into some “major” bad guy in this film and possibly beyond (as we are getting A Quiet Place Part III, currently set to be released in 2023), but the film doesn’t go there, so props to you, movie.

As much as I would love to see more Emily Blunt in this film, I am glad the focus shifted to the “kids”. Well, mainly Millicent Simmonds as her storyline was the thread carrying this film. Every time we’d cut back to her brother, Noah Jupe, the movie got a bit boring for me. That is/was not his fault, to be perfectly clear. But it felt like even the people working on the script didn’t know what to do with his character, or they knew what they wanted to with Millicent’s character and had it all planned out, so they “kinda” forgot about him. I hope we see a future star rising here because Millicent can carry a film. She holds her own even in the scenes with Emily and Cillian, and that’s not an easy task, given the amount of talent between those two actors is insane. And I can’t wait to see more of her, beyond this… I guess now it’d be considered trilogy? A franchise?

The only thing that holds me back from giving this film “the ultimate” rating are the cracks that started to show during this film. Because it’s a much bigger film than the previous one, you get more, and the world-building here… felt a bit rushed at times. I don’t think this is a spoiler as we don’t know much about those people anyway. Towards the end, there is a group of people who I am guessing are supposed to be the “worse than the monsters” cliche I was talking about earlier? But we learn nothing about them. What’s their goal; do they have a leader…? But ok. Also, talk about having a great actor and wasting him. Like many movies before, we have a surprising Djimon Hounsou in here. And as with most films where he appears, he quickly disappears. Honestly, poor Djimon. He always plays the surprise villain or (rarely) good guy, but he hardly stays on the screen for longer than 15/20 minutes. If he and Cillian swapped roles, I wouldn’t be mad, and the more I think about it, the more I would love it.

Also, this film ends with a few plot points not being 100% resolved. I am not someone, who needs a pretty bow on everything to enjoy a movie, but the ending felt rushed. I know the first one ended “suddenly”, but there was a difference. Everything else before that ending was resolved, and you knew what would happen next. That’s what made that ending memorable. This ending felt more like: “Ok, but what happened with/to…” and you can fill in several people and situations that would apply. But I understand why – this film is self-aware, and I think while making this, they already had plans for a trilogy, so why not tease some stuff.

Overall, A Quiet Place Part II is still a pretty great time. I liked how the focus shifted from the parents/adults to kids, I enjoyed some choices, and I didn’t care for others. But, and this can’t be stressed enough, I’ve enjoyed this film a lot. I can’t even begin to imagine the pressure of making a sequel to such a surprise hit the first movie was. And even though I’ve spent most of my review nit-picking some things/decisions people behind this movie made, it must be said this is as close to a perfect sequel as we could have gotten. Let me end by repeating what I wrote in my review for the first film. I am still not sure whether we need a trilogy (another sequel), but I am hopeful the quality of the third one doesn’t drop. I think it will be interesting to look at these films in about ten years as a trilogy to see how well they’ll hold up and whether they complement each other. Let’s hope for the best.