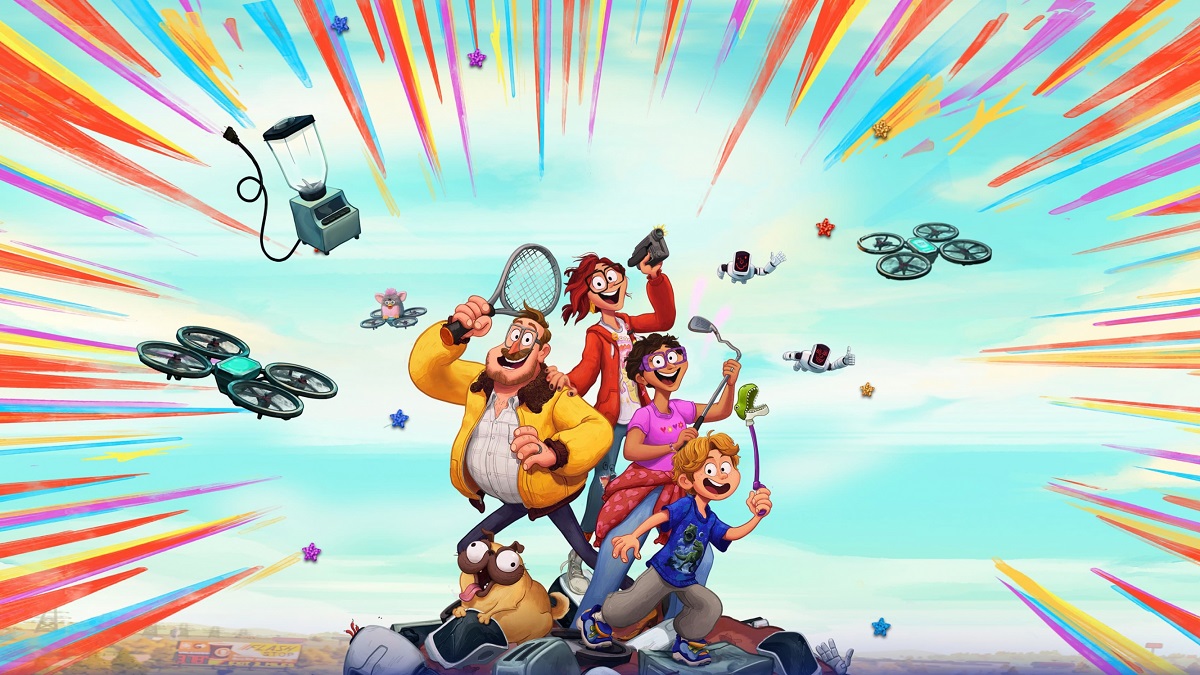 The Mitchells vs the Machines is one of those films I’ve heard plenty about, mainly how amazing it is. So when it got an Oscar nomination, that bumped it on my “to-watch” queue higher. And after finishing this film, I couldn’t be happier about that. Because this movie was everything I didn’t know I needed and more. The best way to describe what I felt after finishing this film would be – this was The Lego Movie (2014) for me. I still remember after I watched that movie; I thought it was decent enough, but everyone around me was deeply in love with it. And The Mitchells vs the Machines the moment it finished, I knew I loved this film.

And yet, on paper, the premise couldn’t be thinner/more cliché. A dysfunctional/quirky family, where one of the kids feel different and therefore not understood? Yeah, because we have seen that done many times now, especially in the animated format. But here’s the thing, this film not only throws in the “robot apocalypse” wrinkle, but it’s also one of the few animated films that utilise the art form to its advantage. It throws a lot at you because its animated world/form allows it. The people behind this film are clever enough to realise that the only limitation regarding animated films is… well, budget. But mainly their imagination(s). And this film certainly doesn’t lack in that department.

The Mitchells vs the Machines understands the Internet culture very well, hence why most jokes here work so well. Sure, some of those might be “a bit” old, but even the movie knows it can “cheat” as those jokes come from when our main protagonist Katie (voiced by the brilliant Abbi Jacobson) was growing up. You can see how that kind of Internet culture of making memes and funny videos where your dog is a cop would influence her and shape her sense of humour. Also, way to go for making her character lesbian and not making anything of it. Good for you, Sony Pictures.

Also, let’s talk about Maya Rudolph. Not only she is a great voice actress, but she also appeared in another animated movie that’s up for an Oscar (Luca, 2021, my review here) and in a live-action film that’s also nominated for Best Picture (Licorice Pizza (2021). That’s a pretty impressive achievement, appearing in three films in one year and all of them being Oscar-nominated. But unlike Luca, where her character wasn’t… let’s say necessary, in this film, her character has a scene where she stole the movie for me. I won’t tell what happens because I didn’t expect that joke, and I didn’t expect that joke to be as long as it was and for it to work for its entirety. It’s not a major spoiler by any means, but for me, it was the highlight of the film, and I want you to experience it for yourself.

Another thing I admired about this film was how every family member had a part in the story. Nobody was there “just” to be the comedic relief. I know that sounds obvious, but not many animated movies do that, as they usually focus on the main character or two. For example, the already mentioned Luca – if you saw the film, you remember the main trio, but what impact did Luca’s parents have on the story? Not that big. Honestly, he might’ve been an orphan; that’s how little impact on the movie they had. But not here. And it’d be so easy to focus mainly on Katie, possibly her dad (voiced by Danny McBride), as that is the heart of this story. But no, mum gets a memorable scene, her brother too, hell even the dog (did you know he is a cop?) plays a crucial plot point. That is why I loved The Mitchells vs the Machines; it was, in fact, about all the Mitchells, not just some.

What I feel needs an especial compliment is choosing Olivia Colman as the voice of PAL (imagine if H.A.L. 9000 from 2001: A Space Oddysey (1968) fucked Alexa) aka the evil supercomputer that’s trying to dispose of all humanity. I don’t think I would have come up with her for this role, and that is why I loved that surprise, hearing her voice in this unconventionally funny role. Speaking of great years, Olivia has also done well for herself as she’s nominated for Best Actress for her role in The Lost Daughter (2021) – a powerful film that’s worth seeing too (review is coming soon).

Overall, The Mitchells vs the Machines is a delightful film. Even with the runtime just under two hours, it never felt too long, it didn’t overstay its welcome, and I will 100% rewatch it. The family element mixed with the impending apocalypse shouldn’t have worked as much, but it does. I know it sounds like the biggest cliche, but this movie has a heart. Even when you think it hit you with everything the movie’s got in store, there is always something more that makes you realise just how much this family care for each other, and it was joyful to see. This movie is one of the simplest recommendations in a while. The only complicated thing for me will be what animated film am I going to be rooting for in this year’s Oscars? Because I thought Encanto (2021, my review here) would get my vote, but now, I want The Mitchells vs the Machines to win.