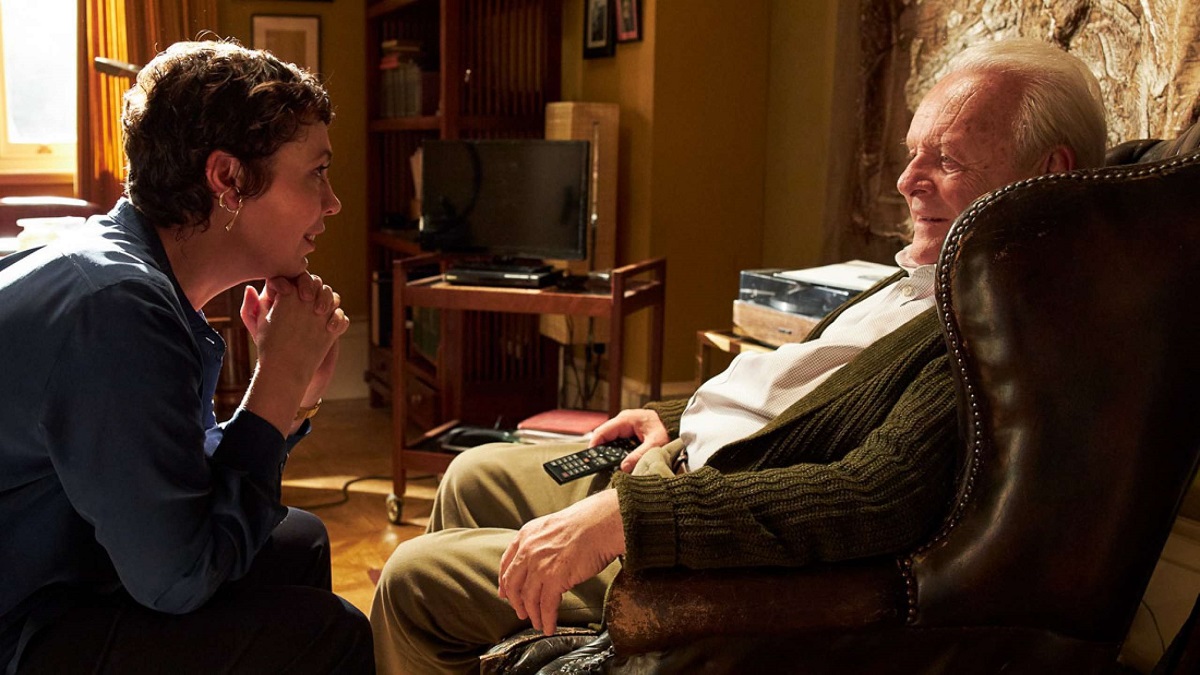 Let’s continue with Oscar movies for at least one day. The Father is an astonishing film that has managed to attach “a bit” of “baggage” to it in its short lifespan. But unfortunately, not by its own doing or by everybody talking about Sir Anthony Hopkins and his masterful performance. No, regretfully, many people will remember this film being “the film” that “robbed” the late and great Chadwick Boseman of his Oscar. If you don’t know what I am talking about, the 2021 Oscars done fucked up. Why? Well, someone has decided to shuffle with the award order by presenting “Best Leading Actor” last and not (as it has been a custom forever) the “Best Picture” category. Because even the people behind the ceremony presumed that Chadwick would get his posthumous Oscar for his performance in Ma Rainey’s Black Bottom (2020), I still haven’t had the chance to watch, so I can’t comment on Chadwick’s performance. But whoever decided to do this, shame on you because that evening ended up with the audience being disappointed that Chadwick did not win. Instead of celebrating Hopkins or Nomadland (2020) winning the Best Picture. What was supposed to be a glorious celebration of Chadwick’s painfully short life; ended up in an awkward situation, where Anthony Hopkins wasn’t even present. And some people even question (as always with the Oscars) whether Hopkins should have won. Again, I didn’t see Ma Rainey’s Black Bottom, but Hopkins in The Father gave… an insanely powerful performance.

The Father is a chilling portrait of an old person; who is clinging desperately hard to reality, or, at least, he’s trying. But what if the reality you see isn’t actually the reality that’s happening? This film doesn’t just show you this brilliantly because of its choices; it puts you in Anthony’s shoes where you aren’t sure what is happening and what isn’t. There are scenes where for example, Anthony’s character (whose name is also Anthony); is attacked by his daughter’s husband. And it makes you feel awful. But then we see it again; we are not sure whether anything happened.

What “helps” with this feeling is the editing and directing, as both are so smooth you might foolishly think that this film was somehow easy to direct. After all, it’s mostly one location, only a few actors…? But The Father is the perfect example of “tough in its simplicity”. The editing is so smooth that often we see the same scenes without realising we’ve “moved” to another point of view of that scene. I appreciated the director giving us some hints, but nothing over the top, so we, the audience, are actively confused too. It’d be so easy to put on a different camera filter, to give us some kind of clutch to know: “Hey, this is something you have seen before”, where we could piece it together in a simplistic way. But the film isn’t interested in easy solutions, stories or characters. It wants you to experience that awful feeling of being so sure something has happened, to pull the rug from underneath you in the next scene, to make you question everything.

Ok, I’ve gone as much as I could without praising the performances, so let’s go. Olivia Colman is insanely superb in this film. I can’t even begin to imagine what a challenge this must have been, to act against a living legend and in such a role, but she nailed it. I also need to give a quick shootout to Imogen Poots. She was excellent in the little time she had, as her character was what I thought was the audience’s biggest “key” into this world. Let me explain – Olivia’s character acts one way because she must. She is used to Anthony’s behaviour (as much as you can get used to him losing his mind slowly) whilst Imogen isn’t, and she comes in as a nurse/somebody to be around Anthony’s character to watch him while Olivia can’t. In her scene where Anthony charms her, just for him to put her down brutally in the next five minutes, that scene is when we see his full impact on people around him. And how devastating this must feel to his loved ones, even though they understand it’s not him, it’s the disease that’s making him like that.

With all due respect to everybody I’ve just mentioned, this is a one-man show. Sir Anthony Hopkins shines in this performance. But for most of the film, it’s almost sneakily as his performance graduates and the further you are in this film, the more he disarms you with his performance. And then, the last twenty minutes of this film happen. I won’t spoil anything, but let me say, there is a scene where the camera stays on his face for a good few minutes as his character has one of those rare moments of realising what is happening around him. And all the different emotions he conveys in that scene alone – anger, confusion, sadness, remorse… At the end of that scene (which is effectively the movie’s end), you are so moved by him it’s unreal. If you are not, are you even alive? I don’t like these “if you haven’t cried during xyz scene, you have no heart” absolutism, but I would not trust any adult who wasn’t moved by the last 20 minutes of this film. I didn’t cry, but I was terribly close, I will tell you that. I am almost positive this film will be shown in acting schools. Because what Sir Anthony Hopkins is doing with this role is insane.

And this is why it angers me that we couldn’t enjoy him winning without feeling guilty or, what is more devastating, awkward. The entire Oscar telecast was building up to Chadwick getting his Oscar. Everyone was ready to celebrate only for Chadwick not to win, and the Oscar went to Sir Anthony instead. I genuinely believe it would have been less awkward had the “Leading Actor” category stayed where it always was, and the ceremony ended with “Best Picture”. I will watch Ma Rainey’s Black Bottom, and I can’t wait to see what Chadwick did with his role, but it’ll be tough to go against Hopkins (or, more precisely, his performance) in The Father.

Overall, The Father is an excellent film that might not be the easiest to watch, but it rewards you for watching it by “serving” you stellar performances by everyone involved. It’s a chilling movie about a topic people don’t want to think much about. As I’d imagine, this is the worst-case scenario for every one of us, losing our mind, not being in control, being a burden to our family while snapping at them because what you see isn’t what is happening. I get it; this is not a film you’d put on every day. You certainly must be in a certain headspace/mood to watch it. But trust me, it’s so worth it when you do; a brilliant piece of filmmaking, supported by incredible performances.