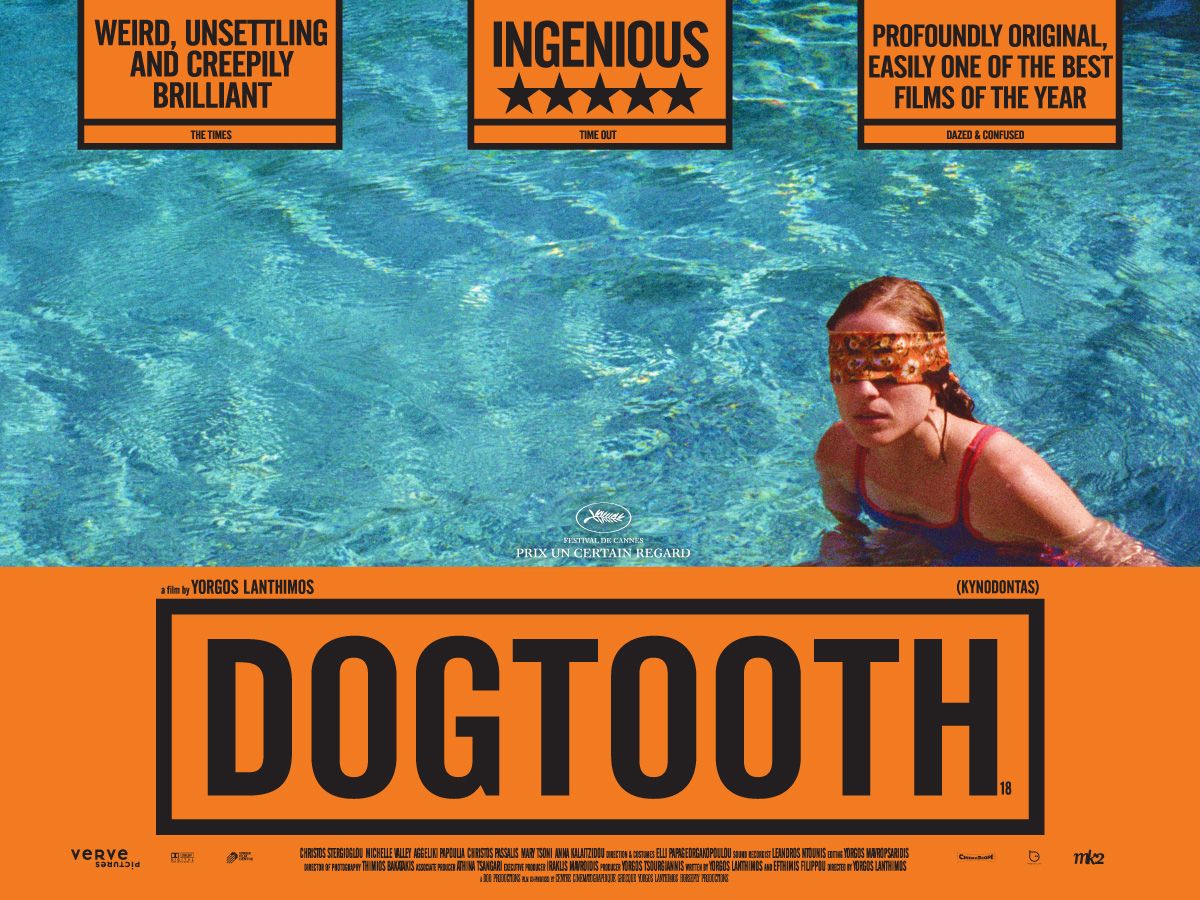 I wasn’t planning on writing a review for this film. I mean, why would you? Dogtooth is one of the most uncomfortable films you will see. It’s that kind of movie you want everyone to watch because it stays with you, but you are afraid to recommend this to anyone because you feel scared about what they might think of you. But to hell with this, let’s get uncomfortable and talk about this film that stayed with me for a while, and I will try to formulate it to the best of my abilities why I thought it’d be worth seeing it.

Dogtooth is the film that put Yorgos Lanthimos on the map. Sure, this isn’t his feature debut, but I still remember hearing “whispers” about this film back when it came out in 2009. Now, of course, he’s the director best known for (mainly) The Favourite (2018) and if you have seen that film and that was “too weird” for you, stay away from this one. Because comparing The Favourite against something like Dogtooth is like comparing weed to heroin. Sure, both are technically drugs, but one will have more impact on your life.

I don’t usually post reviews that contain a synopsis, but I think it might help in this case, given this is a movie not many would have seen. And also, I don’t want to spoil it too much, so this is what the film is about:

A controlling, manipulative father locks his three adult offspring in a state of perpetual childhood by keeping them prisoner within the sprawling family compound.

And this is really saying it all without spoiling anything for you. I will try my hardest not to give anything away because part of the reason this film stays with you is the shock factor. It takes this concept of controlling father and runs with it, and trust me, every time you think it needs to “stop running with it”, as surely, we can’t get any crazier/weirder than that? The movie usually pushes past that to something even crazier.

I think the main reason I liked this film (well, “liked” might be a very weird word to use here) is simple – this is a pure, raw character study of a flawed character and the impact he can have on his surroundings, if left unchecked. It’s another “nature vs. nurture” debate, taken into overdrive where the movie forces you to think and see how much we are affected by the nurture as opposed the nature element. And the scariest part about this? I could totally see this happen. Think about it, those three (adult) kids living in total isolation with just their parents, being told from the early age they can’t go anywhere as the outside world is scary and dangerous place. They have a very limited idea about the world and what is happening, as everything is “filtered” through their parents who are supposed to be the ones preparing them for the real world. So, unfortunately it’s not that crazy to believe “the nurture” (at least in this very specific and horrifying example) would have… won, I guess?

What I admired about this film was how dedicated each actor was to their role. There weren’t any slip-ups; all performances in this film felt raw and contributed massively to this films’ overall mood. Because if you, as an audience member, would believe one of them isn’t 100% on board with this, or worse yet, is a pretty famous face, the whole film wouldn’t have worked. That is another thing about Dogtooth; I can’t imagine an English remake of this film, but this might sound weird; I can imagine a sequel. Hear me out.

Without spoiling the ending of this film, let’s say the things are left… open. And I would love to see what happens/happened next. But not even necessarily on that same day or week. I would love to see a sequel exploring just the “children”, let’s say 10/20 years after. Have they ever managed to discover there is a life outside of their house? Or are they somehow still trapped there? If they managed to be free, how do they live now? Because you know there won’t be any happy endings, as even if they ever managed to free themselves, their brains are wired in such a unique way, it would probably take years of therapy to get them to some sort of “normality”, if such a thing exists. I know this won’t happen; firstly, Yorgos doesn’t strike me as the type to do this (and rightly so), and secondly, the younger daughter Mary Tsoni, unfortunately, passed away in 2017. But the idea of seeing them in the “outside” world, without their parents’ influence… that still intrigues me.

Overall, Dogtooth is not a movie for everyone. Even though I rate it highly, and I would love for more people to discover this film, I will say I’d understand if somebody switched the movie off halfway through. Because it deals with heavy topics and some scenes are very graphic. And that goes back to my question from the beginning of my review. How do you recommend a movie like this to anybody without them slowly backing away from you? Well, if you discover the answer, please let me know because I don’t think I’ve cracked the code on this yet. Dogtooth is one of those films that you can discuss for hours upon hours because it covers many intriguing topics underneath all this weirdness and awkwardness. If you are triggered by certain things, I would recommend doing your research before watching this film. If you don’t care about that, and you enjoy movies that aren’t your “run of a mill” films, this one might be for you.