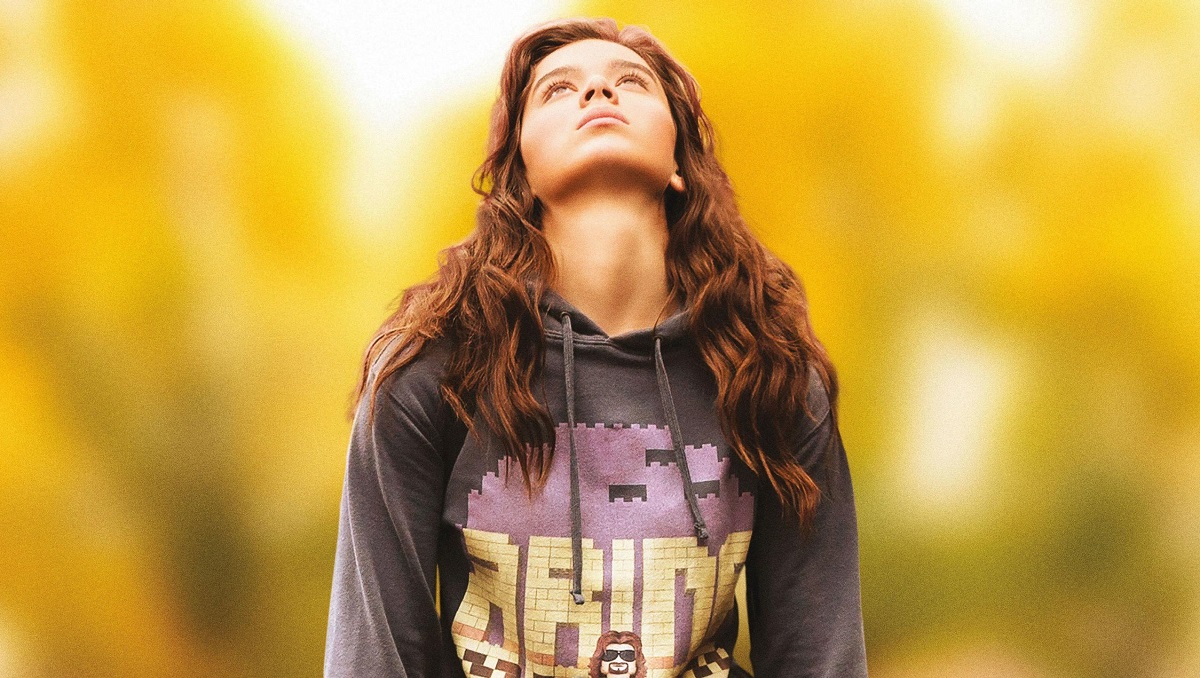 Long before she became Kate Bishop in the MCU show Hawkeye (2021, my review here), I knew of Hailee Steinfeld, and I heard tales about this film. Tales about how this film is actually a pretty awesome depiction of how it feels to be a teenager, so this has been on my radar/watchlist for a long time. So one evening, I’ve found myself in the mood to give The Edge of Seventeen a chance and holy shit. I wasn’t surprised it was great; I had a suspicion this would be a decent film but what I didn’t expect was to love it. And the credit where the credit is due, it’s all due to Hailee because her character (Nadine) is one of the most annoying characters I’ve ever witnessed. But somehow, due to Hailee’s performance, I was never annoyed by her, and I found myself even rooting for Nadine…?

The Edge of Seventeen tells a story about Nadine, who lost her dad at a young age. So she is being raised by her mum (Kyra Sedgwick) and her brother (Blake Jenner), who are also excellent in this film. And as you can imagine, it’s not hard for either of them without her dad, let alone with Nadine, who is acting up like she’s still a child. That was the first time I thought to myself that this movie might not be for me as I usually don’t have patience for characters such as Nadine. But when the film tells you her story, and you see Hailee act the shit out of it, you can’t help but root for her. And even though you see how wrong she is and how much growth she has in front of her, you have patience/empathy for her character as this is her coping mechanism. Not the best one, that’s for sure, but hey, who was “switched on” when they were 16?

Let’s talk about her relationship with Woody Harrelson‘s character, as that was when the movie showed me what I am in for, besides Hailee’s range. I loved the relationship those two had where you can tell there is a history between them, so they are more comfortable with each other. But their relationship never crosses any boundaries, and it never goes into some questionable territory as his character is de facto her step-dad. Nadine goes to him as much as she can, and those scenes featuring just their characters were the highlight of this film for me. Hollywood seems to be obsessed lately with unlikely couples in action movies, where we pair up one action star and one comedian, so why not pair up Woody and Hailee? I thought they worked very well together and would love to see more of them.

If The Edge of Seventeen shined in those scenes with Woody and Hailee, it got me 100% with Hailee’s acting. There were a couple of scenes where Hailee goes from smiling to crying (or almost crying) from high to low, and it was effortless and, more importantly, it felt realistic. Take her awkward “date” (if you could even call it date) with the guy she’s obsessed with for most of this film. The guy takes her out on the ride, hoping to “get some” because that is what Hailee’s text was not just implying but straight up saying. And that awkward car scene where you understand both him and her perspectives, their young inability to talk about what they really want… I think that car scene can be used to summarize this film – young people wanting something they don’t know what exactly or how to ask for it. But we don’t have to worry; they will figure it out, eventually. As the old saying goes: “Youth is wasted on the young.”

The other aspect I appreciated is the idea of the older sibling stepping up and acting as almost a “shadow” parent and how much he needs to sacrifice to help their mum out, mainly with “raising” Nadine. Blake’s character had two powerful monologues, one explaining Hailee’s character and how “great” his life really was, and the other when he was talking to their mum about him not being an adult, yet she would always call on him to be one. I think this is something many people can relate to when they were growing up, the idea of them having to “step up” because of reasons beyond their control. How it was not fair, and yet this is what was expected, so you “just” have to suck it up?

Overall, The Edge of Seventeen was a film I enjoyed tremendously. I had a sneaky suspicion I would like it, but I ended up loving it instead. And the person I “blame” the most for this has to be Hailee Steinfeld. I still remember when she was nominated for an Oscar for her role in True Grit (2010) and thought that kid had a great future in front of her. Now more than ever, I am convinced that she will eventually win an Oscar. Given her enormous talent, the question is not “if” but “when”. And I, for one, have officially become part of her fan club as she proves time and time again she can do no wrong. If you haven’t seen this film, you are doing yourself a disservice.