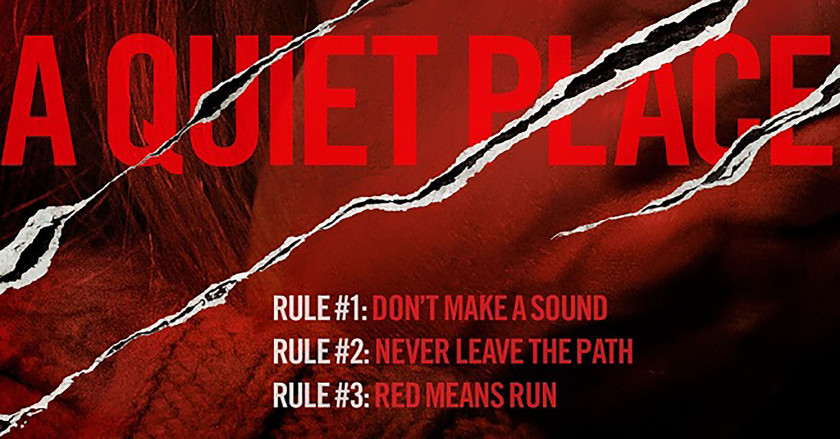 After almost 2 years hearing about how amazing this movie is, I have finally find myself in a mood for a good horror movie, so the choice was obvious. And because of everything I’ve heard about it, I was a bit nervous to watch it, as my expectations were… lets’ say not low. But within the first 15 minutes, this movie showed me there is nothing to be afraid of… I mean, there is a plenty to be afraid of… I mean, it showed me I am in for a great movie.

A Quiet Place seems like a miracle of a film. It’s not part of any franchise (or at least it wasn’t), it’s relying on its audience to be quiet to actually enjoy it, there is minimum of dialogue, and yet, against all odds, it works perfectly. The main idea behind it might not be that original, but it’s executed so well and so precisely, it just works.

Let’s talk about the main actors – Emily Blunt and John Krasinski are to me the Hollywood’s “power couple” nobody really talks about, but it seems like when they collaborate, they are a force to be reckon with. It’s extraordinary, how much both of them can give us (performance wise) without almost any dialogue. But I can’t forget about the child actors, who, let’s face it, most of the time, are not the greatest actors. But this movie hit the jackpot somehow, as all of them were great, believable and knew exactly what they need to deliver.

I can’t help but think Bryan Woods and Scott Beck (the story writers) must be fans of one of the best game of the last decade, The Last of Us. Honestly, think about it, there are plenty of similarities:

Just to be clear, I am not accusing the writers of anything, as matter of fact, I applaud them. There is a saying in Hollywood that goes along the lines of “if you have to steal, steal from the very best” and whether Bryan and Scott have taken inspiration from this particular game, I don’t know. But even if they did, I see no problem with that. Plenty of movies, TV shows, games are just copies of copies, with new, or different twist to the story or characters, and plenty of them are great because of it. Let me just say, if creative people didn’t “borrow” ideas from other creative people, there wouldn’t be any art, as there is always an inspiration from somewhere. And as long as you can give it your own unique twist, people will forgive you.

A Quiet Place also doesn’t pull any punches and does things you wouldn’t expect (at least I didn’t) – the kid dying at the beginning I could kind of see, but John Krasinski’s character dying while sacrificing himself AND making amends with his daughter, who believes she’s responsible for her brother’s death, is a strong scene. And the very end, with Emily Blunt’s character learning that for the very first time, they might just have an upper hand on these monsters, and her just silently looking at her daughter, while reloading a shotgun, with the face that says “bring it!”… let’s just say that last scene definitely swayed me to give this the highest rating. I honestly didn’t expect to love this movie as much as I have.

Side note: As much as I enjoyed myself, I am still not convinced that we need a sequel, even though the ending is kind of asking for it. But John Krasinski pulled off a miracle once. Let’s see (hopefully sooner, rather than later, you hear me, COVID-19?) whether A Quiet Place Part II will be a worthy sequel, or whether it dies, quietly…

That’s all for this one! Did you see it? What did you think about? Let me know!