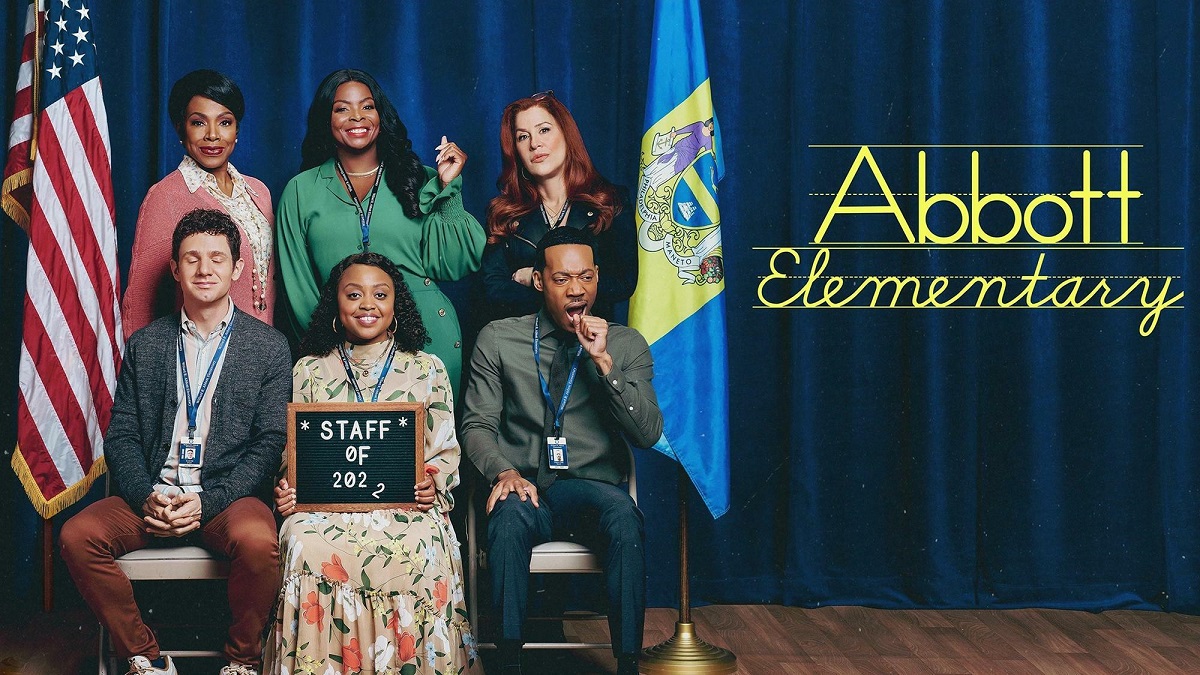 As I have alluded to in my review for Yellowjackets (2021, my review here), I tend to “stay away” from the brand new TV shows as it’s a lot of time to invest in something that might leave you disappointed by its conclusion. However, I have heard amazing things about Abbott Elementary from a couple of people on Twitter I follow, and I got curious enough to “know” about this show’s existence. I was pleasantly surprised when I logged into Disney+ one day and saw the complete first season streaming. So my girlfriend and I pulled the trigger and binged the first season in one day. Neither of us has any regrets.

Abbott Elementary is created and stars Quinta Brunson. I will be honest, I have never heard of her, but I am so glad I am familiar with her now because this young lady is talented. It would be easy to put this show into the same box as The Office (2005 – 2013, my review here) or Modern Family (2009 – 2020, my review here) because it’s “just another” show that is “mockumentary style, people talking directly to the camera crew” deal. What makes this comparison even more “on point” is Randall Einhorn (the man who directed 15 episodes of The Office) directing six episodes of this show too. And yet Quinta managed to take the format and make it into its thing. And that thing is hilarious, heart-warming and most importantly, sincere. If you visit the IMDb’s trivia section (as I do after finishing any movie or a TV show), you will understand why this show feels so real. Quinta’s mom was (possibly still is) a teacher, so of course, Quinta would have had a first-hand experience of the struggles and joys of a teacher’s life in the USA. And what a weird life that is.

I won’t say teachers in Europe lead some fancy life full of wonders and happiness; no. They also struggle with budgets for their students, and some schools are better equipped than others; sure. But it still strikes me insane that many teachers in the USA (and I am basing this not only on this show but many articles I have read online over the past several years) have to buy supplies for their classes. From their packet, from (what I understand) isn’t that a “luxurious” salary. Holy fuck. When I first learned this frankly odd fact, I thought that has to be some sort of special thing for maybe one town or one state… and then, you do some googling and discover, nope, it is not uncommon. I like the USA and some of its culture, but honestly, I don’t understand how some people see this and think it’s acceptable.

The reason I am mentioning this is simple. Abbott Elementary is not shy to highlight this and many other issues with the school system in the USA. But it never does “punches below the belt”, so to speak. Everything this show showcases and deals with, it does with good intentions and, most importantly, through comedy. And this is where you can tell the show is run by somebody with “insider’s knowledge”. As Quinta must have been there, the front centre row where her mum probably struggled with many things we can see portrayed in this show like buying school supplies, the parent’s not cooperating, and children getting cheekier by the second. But she never displays any of these with malicious intent or through some cynical lens. Everything fits and feels like it’s coming from a good place with good intentions (as proven by the fact producers alongside Quinta decided to spend some money they had for ads on buying real teachers’ supplies instead). What a baller move by Quinta and the Abbott Elementary team, bravo.

Another thing this show has got going for it; is the great cast of (mainly underutilized and not well known) actors who are all fantastic. Unlike other shows, it’s hard for me to choose who my favourite is as they feel like an ensemble cast. Everyone from Quinta to Tyler James Williams, Janelle James, Lisa Ann Walter, Chris Perfetti, Sheryl Lee Ralph or William Stanford Davis gets a chance to shine. And by chance, I don’t mean episode, no. Often, they each have scenes where they might deliver one killer line that steals the episode just for that line to get topped by another person. This show is very witty and sharp; the dialogue occasionally felt like if Aaron Sorkin decided to write a mockumentary sitcom about teachers and students, this is how it would look like. That is why I compared this show to the giants such as The Office or Modern Family, as those are perfect examples of shows that never focused on jokes only, they both felt like the story came first, and the quips will come later on.

I don’t tend to make any predictions because I am often wrong, but I really hope we are witnessing a birth of a new cult show, something that will reach the masses and get a few seasons because everything seemed to have clicked straight away. That is where Abbott Elementary differs from those two giants I have mentioned; as much as I love(d) both shows, they both felt like they were finding their groove through their first season (some would argue The Office didn’t find it “properly” until its third season). Whereas this show, by the end of its first season, felt “complete”. When I was thinking about what I just saw, I realised I didn’t have any notes. I can’t write: “I hope they will focus on this character more” or “I wish they would fix this in the second season”. No, by the end of the first season, all characters seem well established; the storylines have been set in motion where you can see where some might be going over the next couple of seasons, and I am in. As long as Quinta is in charge, I am confident we could have a new classic on our hands.

The only thing (call it a wish, if you want) I have is – I hope this show will not fall into the “we need 22 episodes a season” trap. Ok, let’s word this better – I hope ABC won’t push the creators in that direction. I believe one of the reasons this show worked as well as it has was the fact there were no “filler” episodes. Everything felt in place, connected, and nothing, no scene or episode, felt wasted. I can only hope some “big head” at ABC has enough awareness of the current state of entertainment as those days shows had to have 22/24 episodes a season (mainly comedies) should be over. Every major show suffered because they had this quota to fill, and you could tell (mainly in the later seasons) that some episodes were “pointless”. Sure, those episodes might still have some decent jokes, and you will watch them, but they don’t do much for the quality of the overall story. My secret wish (well, not that secret anymore since I am writing about it here) is Abbott Elementary could be one of the first network “sitcoms” that stays around 12/13 episodes a season.

Overall, Abbott Elementary is a funny, witty and (at times) heart-warming show from an environment some might be more familiar with than others. It is an ensemble cast where it’s hard to choose a favourite or outliner as they are all so well cast. But, the most credit has to go to Quinta Brunson for creating, writing and starring in this show. She is a triple threat, and I hope she will get all the support and resources (unlike the teachers this show is about) she needs. I can’t wait to see more of this show. If you are on the hunt for a new comedy, look no further than Abbott Elementary!