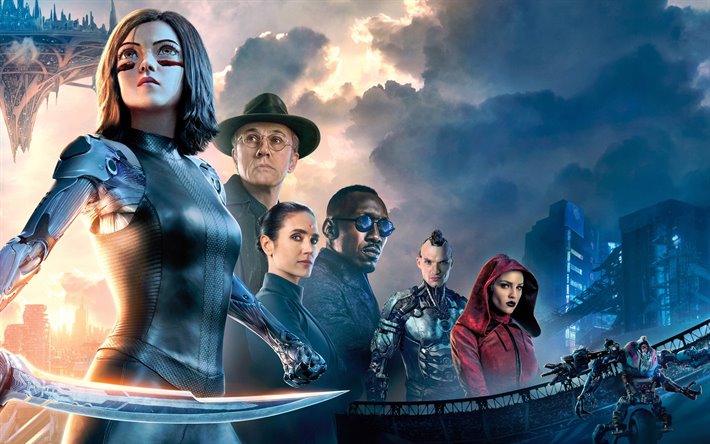 I remember the very first time I’ve seen the first trailer for this movie, and I was… mixed on this. It looked like that type of movie that can be ridiculously funny and entertaining, but also looked like something that could easily be another Jupiter Ascending (2015), where (questionable) visuals overtake everything and the story and performances aren’t that great.

After the movie came out, I was hearing mainly positive things about the movie, so I was kind of looking forward seeing this. And finally, I’ve watched it, as with more and more movies nowadays, without knowing anything about it – I didn’t know it was based on manga (yeah, I know, I’m like the last person who didn’t know that) even though it became obvious watching the movie, as the action scenes were done differently than your typical Hollywood blockbuster (in a good way).

That’s where Alita: Battle Angel shines (no pun intended) – action sequences are not choppy, in most scenes you can tell what’s happening and where everybody is, so that’s definitely plus. And even the special effects are great, even though it will be interesting to see how well this movie will age (how great will it look 10/15 years from now).

Halfway through the movie I’ve realised something – I’m not enjoying this as much as I could be, as I thought the movie is trying to do 100 things at once, and it shows. There is a plenty of world building, but also there is a lot of what movie hints at. Which, if you do it properly and don’t overdo it, I wouldn’t mind. But if you do it in a way that says “we would love to tell you more about this character, about this place, about how everything works, so gives us money and we will make sure to explain everything in upcoming sequels” I refuse to play along.

Movie should always work on its own, even if you plan this as a trilogy, especially the very first one! You need to establish much more than Alita managed to do, because as it is now, Alita: Battle Angel is half of a movie. There is no end, there is just a setup for “things to come”, where you don’t really know answers to some basic questions asked throughout the movie (Who is she actually? Who is Nova?) and I’m kind of sick and tired of this approach.

This honestly feels like the movie is either 20 minutes too long (if we were to cut some sequel setups) or 2 hours too short. There is an argument to be made that this would be much better HBO/Netflix show, with proper budget, where you could immerse yourself in this world, properly build it and tell the story you want to tell. And then your viewers would even forgive you ending a season on a cliffhanger, where if you know second season is coming, it feels very different than having the movie simply not answering things it should. Movies are very different medium than TV shows. Yes, it sounds obvious, but looks like it’s not really to Robert Rodriguez.

Think about it, especially in 2020, the line between what’s a movie and what’s better suited to be a show is very blurry. But whatever medium you pick, you better stick to its rules, because they matter. Especially the rule that movies should have some sort of structure, where beginning, the middle and the end is not only appreciated, but it is mandatory, as it works much better. This is where Alita fails – it doesn’t work on its own. And sure, if there will be a sequel that clears up some things, it might work better, BUT…

It’s the same as making a movie based on a book – it’s always better to read the book before watching the movie, as books contain more details, but it should NEVER be mandatory, as movie should work on its own! It should only serve as a recommendation, where the book would go over extra (not necessary) plot points in more detail, or would give extra development to some characters. But having your movie rely on book (“Oh, you want to why this happens? Read the book!”) is a cheat. The same way having a movie rely on getting a sequel (“You want to know who this character is? Make sure to give us money, so we can tell you… THE NEXT TIME!”) is just annoying.

Which is a shame, as Alita: Battle Angel is a good movie with some great actions scenes, decent cast and world I wouldn’t mind exploring more. But not like this.