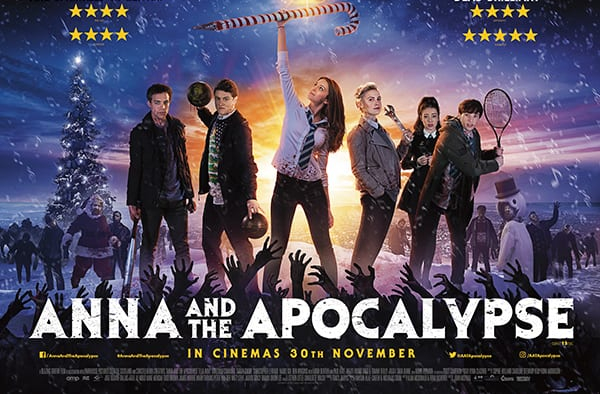 I need to preface something – I love these kind of movies. Shaun of the Dead is probably in my TOP 20 movies of all time, I even like when cheesy horror meets cheesy musical (I really need to re-watch and write a review for Repo! The Genetic Opera to see whether I still love it the same way I have a decade or so ago), so I was quite excited for this movie. And from a few people I trust on the internet I’ve heard it a pleasant movie, that’s worth watching.

Maybe that’s why I feel slightly disappointed with what I’ve seen. Anna and the Apocalypse is not a BAD movie, that’s not what I am trying to say. It flows well, the main protagonists are likable, I liked that they’ve taken some bolder choices regarding who survives and who dies and when, so far we are good.

My two big issues with this film are these:

I feel like by a complete (and I guess unwanted) accident, this film only highlights how brilliant of a director Edgar Wright truly is for making Shaun of the Dead and blending the horror genre with comedy so flawlessly. That movie has no (W)right (see what I did there? Ok, I see myself out now…) to be as brilliant as it is.

I’m really hoping I get to see more of Ella Hunt in the future, as she’s tried her best to make Anna and the Apocalypse work. If it wasn’t for her, my rating would have been lower.

Is Anna and the Apocalypse worth seeing? Let me put it this way – if you have a chance, see Shaun of the Dead first. If you don’t have the means to see it, and your only other choice is this movie, I’d go for it, don’t expect much, maybe you’ll be surprised. I wanted to be, believe me.

That’s all for this movie? Did you see it? If so, what did you think? Am I too harsh, or were you underwhelmed too? Let me know!