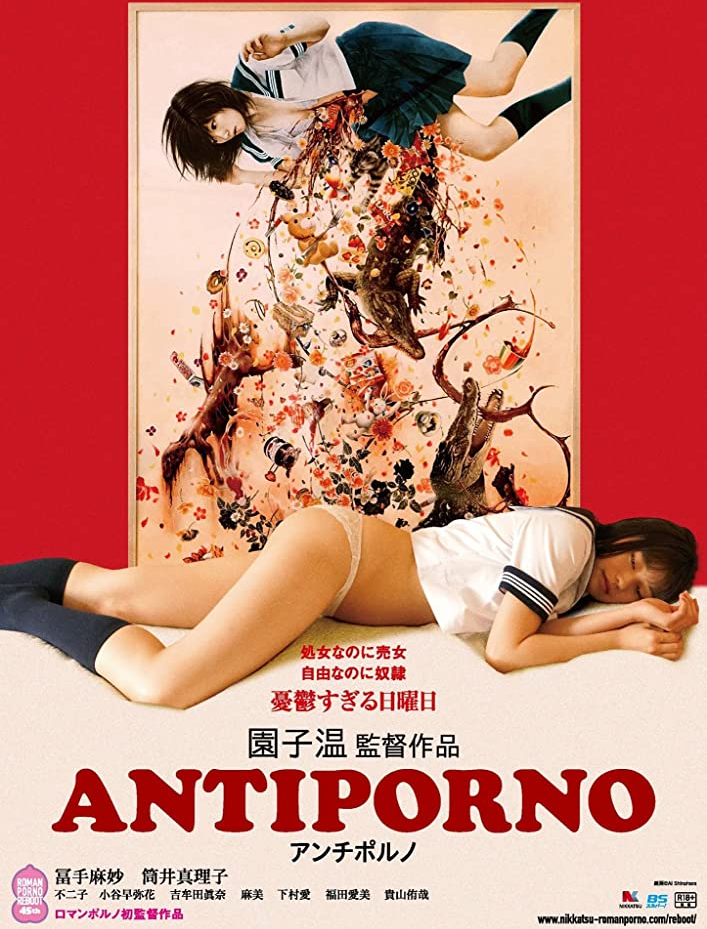 Wow. Where to start with a movie like that…

Antiporno is one of only a few movies I’ve ever seen, where after it was over, I wasn’t sure how to rate it, let alone what to say about it. So I’ve watched a different movie right after, and in the back of my brain, I was trying to make my mind up about this one.

Because this is the very definition of artsy movie, to the core. Sharp, pastel colors, some over acting that serves the main concept/idea of the movie… well, judge for yourself, slightly NSFW (not safe for work) trailer here:

When I’ve re-watched the trailer, something struck me – this could very well be made by David Lynch who’s one of my favorite directors of all time. The atmosphere is unique, the story is VERY unique and the message/point of the movie…?

That’s the thing I couldn’t comprehend when I finished it. I knew I felt something, and I knew I liked most of it, but I couldn’t put my finger on what it was. And then it struck me.

I believe these artsy movies always have a scene or two where they give you a key on how to “read” that movie and with this one (to me) the key was that lunch (?) scene where the main protagonist, her sister and her parents are REALLY openly talking about sex, but when the daughter asks about videos or pictures, she’s shamed for it, as it’s considered “indecent”, even though, as she says to her parents (paraphrasing here) “I hear you fucking every night, so why videos or pictures of sex are indecent?” This scene has “unlocked” the movie for me, to a certain extent.

It’s also trying to say something about a woman’s role in their society, as the main protagonist says several times throughout the movie “I’m a virgin. A virgin, but a whore.” I feel like the director tried to say something about how Japanese men expect their woman to be pure, only serve (read fuck) them, but once they do that, they NEED to be their little toy for them to do whatever they wish. How men are trying to control what women can and can’t do, the expectations they are putting on them. And to be fair, I don’t think that applies to Japanese men/women only, I feel this is more of a global message.

Then again, this is the way I’ve read it, and it might be completely wrong, and maybe it was supposed to be about seeing some women naked, while there are pretty colors around, what do I know?

I feel like even though I did like this movie, the overacting (however necessary) killed some of the “enjoyment”, especially at the end with the cake (which I guarantee you, that scene has some much deeper meaning, I was just too stupid to understand).

I would only recommend this movie to somebody who’s quite adventurous and doesn’t mind movies where the narrative might not be as straightforward as with mainstream movies. And be comfortable with some amount of nudity, that’d definitely help too.

That’s all for this hell of trip. What did you think of it? Did you see this movie, or it doesn’t sound like your cup of hot cocoa? Let me know!