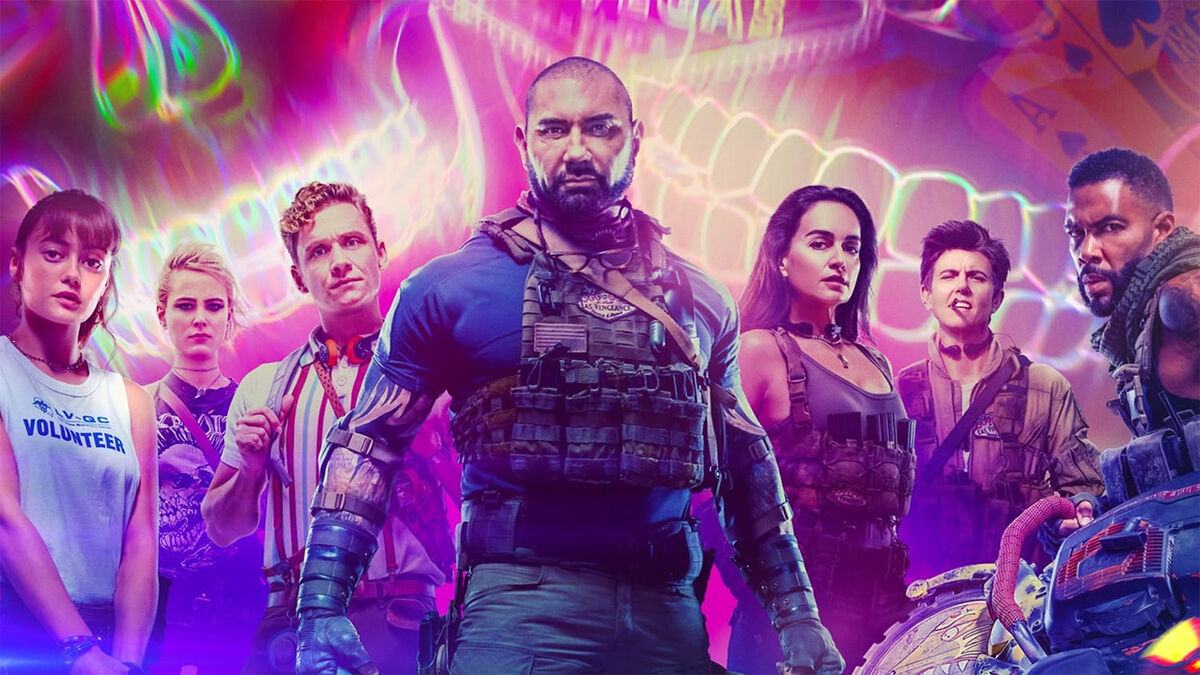 Let me start this review by stating something – I love zombie films. Even the bad ones, like most of the Resident Evil franchise (and that franchise has some spectacularly bad movies), I can still find a way to enjoy them. I don’t know what or why, but there is something appealing about zombie films to me as it’s usually not “just” about the undead, but you can see how society reacts (or would have in this movie world) to that kind of crisis. And if you go back far enough to the classic of this genre (Night of the Living Dead, 1968), you can see how zombie films could be used as a device for social commentary. The point of this was to say I really wanted to love Army of the Dead. I thought this might have been the film Zack Snyder needed to go back to his roots (as his previous zombie flick Dawn of the Dead (2004) was a brilliantly simple yet excellent zombie film) to something he knows. Oh boy, if only…

I honestly believe Zack had good intentions but went about it the wrong way. The first problem with Army of the Dead, it takes itself too seriously. The film, whose events start with a blowjob gone wrong, shouldn’t take itself that seriously, yet it does. If he wanted to do something new with the zombie genre and give it a new life (ironic, given the subject matter) because we have seen so many zombie films and TV shows lately, that’s fair enough. What is not “fair enough” is showcasing some of these ideas and then never following up on them.

Without going into spoilers, there are a couple of characters we should care about and by the end of the film, we don’t know whether they survived the ending. It’s not mentioned we don’t see their bodies, not one line of dialogue, nothing. But for me, this wasn’t even that; it was more about the other thing, like robot zombies. Yes, you read it right.

I don’t think I need to flag this as a spoiler, as again, this goes absolutely nowhere, but throughout the film, you might notice that some zombies, when killed, their heads seem to fall apart, and this blue light appears that almost shuts down. I thought I was going crazy, but once the movie was over, I read about it, and that was one of the most common complaints confirmed by IMDb’s trivia too!

Some of the zombies are robots. This is never explained in the film but Zack Snyder confirmed it: “If you pay close attention, there’s a number of zombies that are clearly not zombies. You see normal zombies and then you see some robot zombies.”

And this makes my blood boil. You have this new idea that can be intriguing if done correctly, and you don’t even bother to do anything with it. Sure, just show us robot zombies and don’t bother to explain anything about it. Why not? And before you or anybody else comes at me with: “Well, actually, he’s filming a TV show (Army of the Dead: Lost Vegas (2022 – ?), and there might be some sequels to this film…” I don’t care. Filmmakers must start respecting their viewers and fans and give us a solid film with a beginning, middle and end. Not a bunch of ideas that might or might not get expanded upon “if we get that TV show off the ground, or if we get a sequel greenlit”. I understand Zack isn’t the only one guilty of this “phenomena”, but this film encapsulated my biggest issue with current Hollywood. So many great ideas are thrown on the wall to see what sticks in one movie that can’t tell one singular story. Many things are “hinted at” or “winked at”. But not because the story demands it but because there are 10.264 properties linked to the success of that film. So you better pay us to make that first property successful; otherwise, you will never know what this detail means, and we definitely don’t get to explore this cool idea too!

The trouble with this new modern approach is simple – there is so much stuff out there for us to watch your movie/TV show can be the best thing ever made, but sometimes even those require time for people to catch up. Another, possibly even more crucial point, is that we (the audience) deserve full movies. It used to be that only a great movie gets a sequel, either based on the critical reception or the box office numbers (in an ideal case, it was a mix of both, but let’s face it, it’s all about money). But nowadays, films don’t even have a trailer out, and they are already viewed as a “starting platform” for other things, so we get many “hints” throughout the film for “things to come”. And then, when the movie flops, and we never get those sequels, we are left with a film like Army of the Dead, full of intriguing ideas but lacking in execution.

Also, I need to mention something else that bothers me – Zack Snyder was once upon a time one of those directors I watched out for. I wanted to see everything they were making. Because I loved his first two films, the already mentioned Dawn of the Dead and 300 (2006, my review here), is still one of my favourite movies of all time; despite all its flaws, I love that movie unapologetically. And even his version of Watchmen (2009) I liked more than most. However, I need to revisit it now, especially with my knowledge of the tv show Watchmen (2019), to see how that holds up. But lately, with everything Zack is throwing our way, I find myself bored with his style. I understand some people still adore him, and honestly, good for you. But unless one of his next movies does something different, I don’t think I will ever get as excited for his films as I did ten years ago. And why? Because he is all about the visuals, the spectacle, and does not care too much about the actors, as proven by this movie. Take Ella Purnell, for example. Thankfully I know what she is capable of because of Yellowjackets (2022 – ?, my review here), but if I were to judge her based on this film alone… It’s not like she’s awful in this film, but it’s more about she’s not good here either…? It is not just her; I could say the same about any other actor in this film. I singled Ella out for a simple reason; I know she can do better because I have seen her much better in other things, mainly Yellowjackets. And that (good actors being just ‘meh’) goes behind the director, who is focused more on stuff looking cool and setting up thousands of different projects, rather than him being focused on delivering one spectacularly great film. It’s a shame; I used to be a big Snyder fan.

Overall, Army of the Dead is a wasted potential of something that could have been a slick and fun zombie flick. There are still some great and cool scenes to watch, but for every great scene in this film, you get something that never gets explained or a performance that doesn’t hit you at all. You don’t care about any of these characters, and that’s bad, mainly in… you know, a zombie survival movie. You should be rooting for them to survive, not looking forward to some creative way they can die. Would I recommend Army of the Dead? If you are a die-hard Snyder fan, sure. If you love zombie horror, approach it with caution, just like you would an actual zombie.