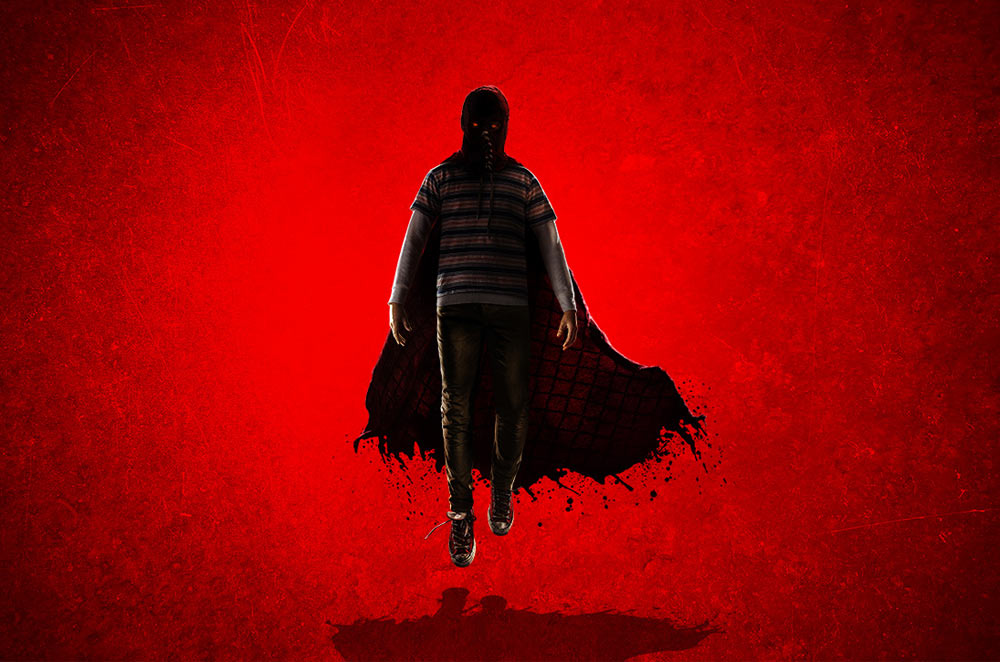 If you were to tell me, that this movie’s pitch started something like this, I’d have believed you:

Gunn Cousins: (Pulling up the chairs closer to the table.) “Alright, we have an idea for a great movie!“

Gunn Cousins: (Smiling like crazy.) “Just imagine, a Superman movie, where he’s a total dick and everything is joyless!“

Producers: (Looking around themselves, slightly nervously): “Isn’t that just Batman v Superman: Dawn of Justice all over again, minus the Batman shit?“

Gunn Cousins: (Smiling even crazier.) “Nope, not at all! Because this time, he’s a 12 year old kid! See? Totally different!“

Producers: (Looking around themselves, smiling): “Can’t argue with that, go ahead and make it! And remember, joyless, Superman-like kid who’s total dick! And no Batman!“

Gunn Cousins: (Slowly leaving the room.) “Don’t you worry, we won’t! Can we have Elizabeth Banks in the movie?“

Producers: (Already counting all the dollars they are about to make from this movie): “Sure, it’s not like she’s busy with anything, just give her a call!“

And they’ve gone and made exactly that. The biggest problem with Brightburn is the movie is banking on its own premise way too much to carry the entire thing.

THERE WILL BE SPOILERS, BE WARNED!

For a horror movie, Brightburn is not scary, as it mainly relies on cheap jump scares and not on tension building for those jump scares to work. For a “unique” superhero movie, it’s not interesting at all, as it doesn’t give you more details about why Superman… I mean, Brandon, sorry, turned…

That’s my biggest problem with this movie – why did he HAVE to be possessed with something “evil” from the spaceship he came from? Come to think of it, why would the “evilness” waited for almost 12 years to possess him…? Why did it wake up? How does it work? And why wasn’t it attached to him from the very beginning since he landed?! Why it couldn’t be something like actual Superman story, where he stands out from the crowd too much, even in the early age, but where Superman was the “bigger” man, Brandon had failed and that’s why he had turned evil?

To me, it’d have been much better (and interesting) watching almost a psychological thriller about a kid who realises he’s got basically unlimited powers, and he starts to misuse those as he was always the outcast. Where we could see the potential struggle, his adoptive parents would try to ground him to be better, to be good… but no, instead of that, we got a really ineffective “horror” film with one, maybe two alright scenes and the rest was just bland mix of something, that had a GREAT potential.

No character in this movie is properly flashed out, and that’s why even the parents are bland, so when they try to convince him to “be good”, it rings false. Like the “lesson” when Brandon and his dad went camping and the dad was trying to talk to Brandon about “the birds and the bees”. At the end of that lesson, even I was confused as fuck, let alone a 12 year old with super powers and anger issues! I can’t blame him for going right out to that girl’s room, as it almost sounded like his dad encouraged him to do that! What I did like was the ending, not the fact it tried to set itself up for a sequel, but the fact Brandon actually “won” and could (potentially) wreak more havoc.

Overall, as I said in the beginning, Brightburn is a movie with brilliant idea/concept, that unfortunately relied on itself too much and it almost seems like everything else around that idea/concept was done as generically as possible, where in the end, you’re not quite sure what you’ve just watched, but you know, it could’ve been way better.