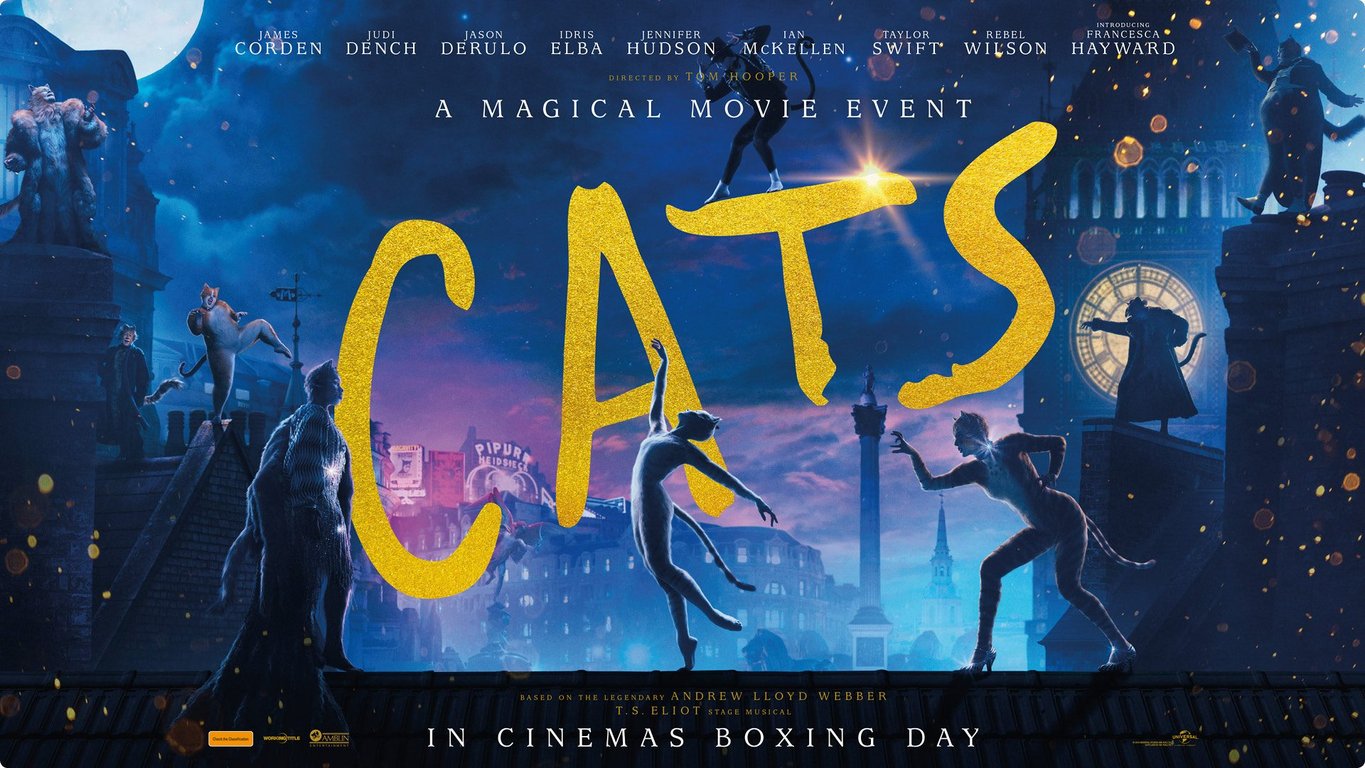 I was not ready for this. I have seen trailers, I have seen the reviews, I have heard movie people rejecting this movie in unison, telling you (and me) not to watch it, even out of sheer curiosity. Have I listened? No. I just needed to see it for myself to believe… it. To believe, that even in 2019, with budget of almost 100 million dollars, with a studio behind this movie, with great talent both in front of the camera and behind it, something like this is still possible to make. Cats is truly once in a lifetime experience, where you are terrified, confused, slightly excited (why do some of them look sexy?!) and just stare at the screen for its entire length with your jaw open, wondering how the fuck movie like this went through the studio system, without somebody, someplace trying to stop this from ever being released.

I have a proud “tradition” of always finishing every single movie I watch. No matter how bad a movie is/gets, how it infuriates me, I have never not finished a movie I started. And let me tell you something, it’s been a long time since I have been so tempted to do this, but while watching Cats, I honestly wasn’t even curious where this nightmare fuel is going. As everything was so bizarre, so all over the place, I actually tried to imagine doing a live review, as I was watching the movie. It might look like this:

What is Jellicle? Why should I care? Why do the say it all the time? Can somebody stop them?

Is that Idris… Oh my god, that is Idris Elba.

Can somebody just end my suffering?

For being the centre of attention (protagonist), Victoria sure doesn’t talk much.

Are some of these fucking cats magicians now? Is Idris Elba Thanos mixed with Nightcrawler?

Rebel Wilson has just been told to spread her legs as many times as possible, wasn’t she?

Wait, do cats wear cat suits and if so, WHY? Did Rebel’s character just undress from a cat suit?

Oh my god, I didn’t think it’s possible to dislike James Corden even more, but Jesus, he’s not funny in this at all.

Who thought Jason Derulo should have a British accent? Because I don’t trust that person with opening of a pickle jar with no lid.

Why does Jennifer Hudson look LIKE THAT?! They all look fake as fuck, but what’s up with her face?!

Why does Dame Judi Dench look like half cat and half plucked chicken? Why is she in this movie?

Why is Sir Ian McKellen in this? Did they seriously make him lick a milk from a plate?

Will the suffering ever end?

Of course that’s Taylor Swift. Did she seriously been given just one line to read?

Why do these cats still have human hands and feet and not paws?!

Oh, Memories is on again, hopefully that’s the end now. Did Jennifer just ascended? What does that mean? Will she be reborn, or did she just become a cat Jesus?

Oh my god, this is not the end?

I honestly can’t produce a normal review, as this is beyond any normality. I was trying to wrap my head around what’s happening, why is it happening and most importantly, how could a movie like this be improved? And I think I might figured it out. The entire point of Cats is this no ordinary movie, so Tom Hooper doesn’t make sense to direct this, as he’s as “ordinary” as they come. If this movie needed to exist (and it didn’t) it should have been done properly, with a mad genius at helm – this movie needed David Lynch.

I know what you are thinking, “WTF? Why him? He doesn’t have any experience wit musicals, or Broadway?” and sure, in this instance, it would have been a challenge for him. But in every other aspect, this movie needed somebody to fully embrace every single weird aspect of this mad, mad cat world and if Lynch has proven anything in his rich career spanning 40+ years now, he is not just a friend with weirdness, weirdness is getting some coffee and Christmas cards from him every year. Just before the end of this movie, it finally clicked to me, this doesn’t work because it’s done half way. Couple of examples – they are cats, but don’t have paws. The actors are fully aware of the absurdity, so they are not fully in that world. Lynch would have embraced every single detail, everything. I am not saying he’d have fixed it, but at least it would be something.

Let me put it this way – I would highly recommend you watching one of his newer shorts, called What Did Jack Do? (2017) as it’s amazing. A 10 minute short film, with just Lynch and talking monkey called Jack, where David is trying to figure out what did the monkey do, as of course, the monkey talks. But, in those 10 minutes you get into the story, because Lynch doesn’t do anything halfway and embraces the weirdness, so at the end, you do understand what Jack did. And it’s a great, weird short. And that is my point – if he could make you believe in just 10 minutes that talking monkey is absolutely normal thing, he could even make a movie like Cats work. I don’t know how well, that’s a different debate all together, but he would have given us fascinating, once in a lifetime experience, where it’s entirely possible you might not be thinking about “is this what hell feels like?” while watching it.

See, it’s not possible to write a normal review for Cats. Do you honestly believe that I knew I will advocate for this movie to be remade with David Lynch in charge? No, I didn’t think I will go there, but it happened. Because I didn’t know how to grasp this review, as is the same as watching this movie – an out of body experience like no other, that leaves you terrified, speechless and strangely aroused (don’t even get me started on the butthole cut of this movie, let’s not even open that can of worms).

I can’t recommend you watching this, don’t be like me and trust the people who have been there before you – even out of curiosity, this movie isn’t worth it. I really felt bad for Francesca Hayward as you can tell she’s a talented dancer and singer and I honestly hope that it will only get better from here onwards for her. I mean, I needs to be right…? Right…?