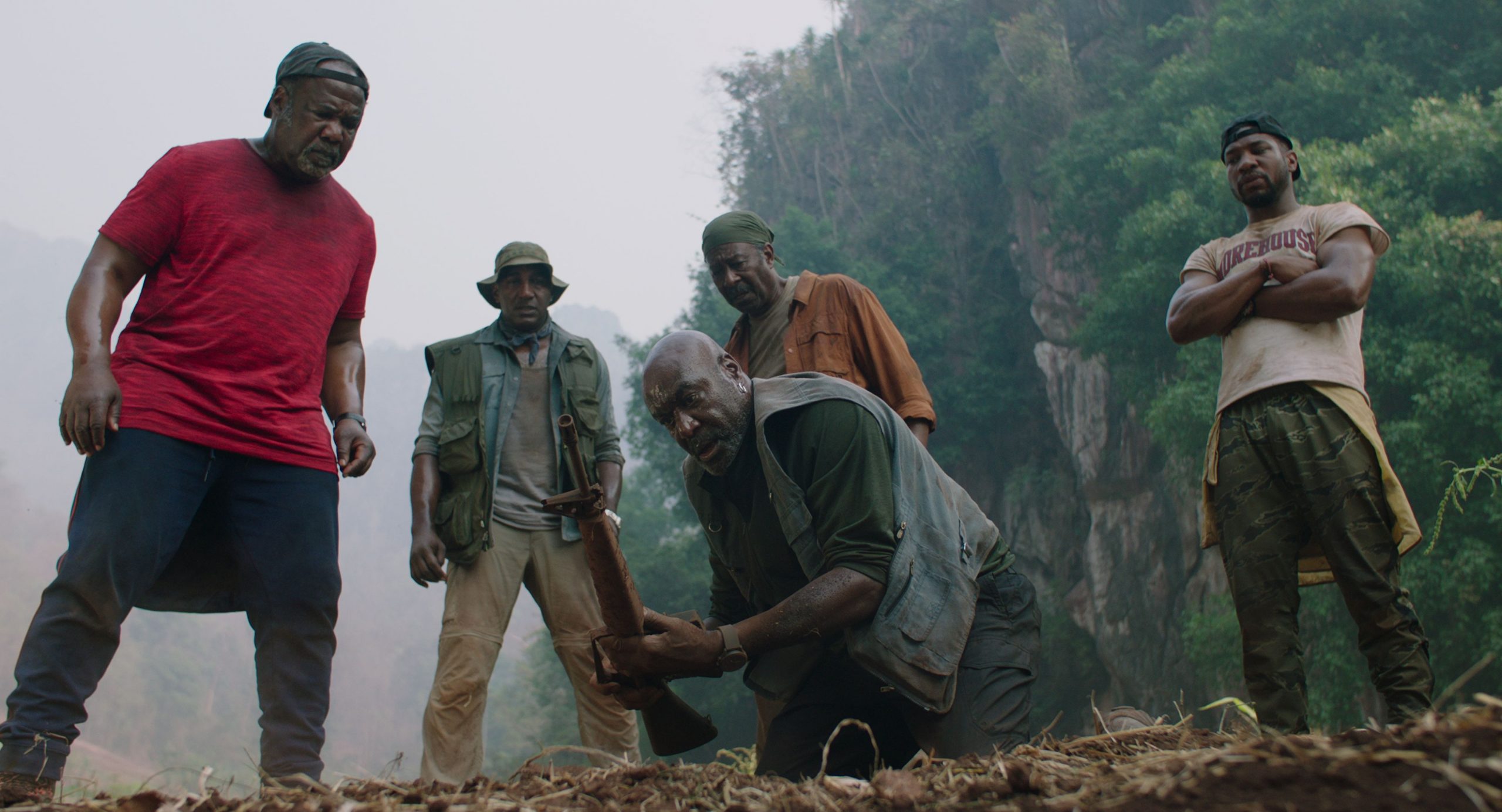 I can’t even remember when was the last time I wanted to like a movie as much as this one. On paper, it’s got many great things going for it – the cast is superb; I like Spike Lee‘s films and how political he can get. The story is also intriguing and (yet again) on paper should work. And to top it all off, one of the last roles for Chadwick Boseman. I still can’t believe he’s gone. What a talent, gone way too soon. So what went wrong? My personal opinion is, Spike just bit off more than he could chew.

Let’s start with the cast because I want to praise this film first. Everyone here is simply superb. As pointed out by many people who were cursing the Academy for not nominating him, Delroy Lindo is the standout amongst them all. That is saying something because, at first glance, I wasn’t too sure about his choices. He seemed so over the place for me. But the more layers you peeled of his character as the movie progressed, the more you understood why he’s going all in. There was no other choice. What his character has gone through, the burden he was carrying with him for the last almost 40 years… Once everything was revealed all cards were on the table, you couldn’t do much more than join the people who were cursing the Academy for not recognising him. I remember only one more snub from the recent history that always leaves me perplexed and angry – Amy Adams not being (at least!) nominated for Arrival (2016). What’s that, you say? I am wrong because for sure she must have been nominated? Go ahead and check for yourself. Anyway, back to Delroy. He managed to stand out in a sea of great actors and took some bold choices that paid off. Everybody else (and I could pretty much copy and paste every single actor in this film) was also superb in their way, but Delroy… he delivered a complex performance.

I also like the way Spike Lee shot this film. How characters would sometimes talk about someone, and there would be a picture of the real person on the screen. Or an event that took place that’s related to the story. But that’s not “news”. Meaning nobody will be surprised when Spike Lee’s films (or joints, as he calls them) are filmed in their unique way. That goes almost without a saying. But in this example, I wish he would focus more on the story.

And I think this is where the cookie crumbled for me – since we are following two timelines (past and the present), they should complement each other, right? They should feel like they belong, almost intertwined? Well, that didn’t happen. I wish we would have gotten more scenes with the “younger Bloods” in Vietnam, as every time it got interesting, we went back to the present. And the same way, the moment I got used to the present storyline and that got interesting, we shifted the focus again. The movie felt disjointed. This storyline structure isn’t anything new; it’s been used countless times before, and it works (mostly). But for some reason in here, it felt more disruptive than anything.

The other thing, and I want to make sure I word myself precisely here. The scenes from the Vietnam War; as much as I enjoyed them, I didn’t buy them. What I mean by that, I wasn’t transported in the ’70s. The movie failed to convince me we are in the past now. And I think it might have been the way those sequences were shot, but all I could see were actors playing their parts. Not the characters. Because those scenes were shot in this almost documentary-style, that yes feels unique, but every single time it managed to pull me out of the film completely. Maybe that was just my problem; I don’t know. But if a movie wants to take you back in time, and it fails to convince you that what you are seeing is happening in the past, something is wrong.

What I liked, even though it was a bit on the “predictable” side, was the underlying story about money (or, in this case, gold) corrupting everybody. And how everybody from the “Bloods” wanted to be exactly like Stormin’ Norman (Chadwick’s character), the guy, who’s got his shit sorted, he’s got a clear moral compass, ideals and ideas he is not willing to comprise. But the moment life/money gets in the way of that, almost everybody cracked. Again, even though it sounds predictable, I liked how that was executed. Part of it was Chadwick’s performance because he made it seem so easy.

Speaking about cast the, I was surprised and delighted to see Jean Reno in a movie like this. But then almost immediately got sad to see an actor of his calibre reduced to the “evil European with an accent” trope. Honestly, you get somebody like him in your movie, and you give his character almost nothing to do besides “be evil, be French and make sure you let everybody know how evil you are”. That seemed a bit wasteful. You can almost argue he wasn’t necessary for this film, his part could have been replaced by the gangsters, who are after “the Bloods” in the second half of this film, and nothing would have changed. That’s how unimportant and wasteful his character was. What a pity.

Overall, Da 5 Bloods is a wasted opportunity. The film is a bit too long; the scenes from the Vietnam War didn’t transport me there (therefore didn’t work for me, and they pulled me out of the movie), and Spike seems to be wanting to tell so much, he missed the basics. Just because something is complex doesn’t mean it’s better. Is it worth seeing this film? I would say yes, just for the cast alone and Delroy’s performance, that will go down in history as one of the biggest snubs we’ve had. But don’t expect too much. That is a shame, as I thought on paper, this couldn’t have failed. And, to give this movie some credit, it didn’t exactly fail. It just fell short of any movie you can think of that’s dealing with the Vietnam War.