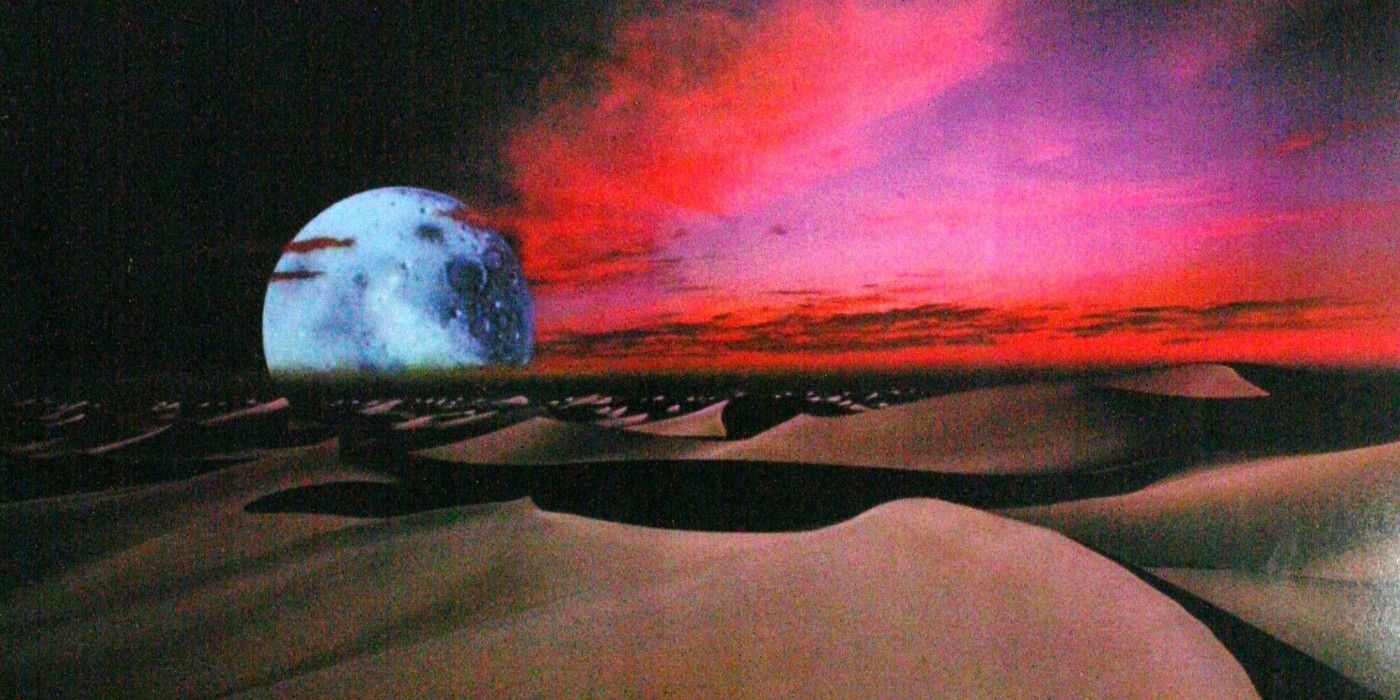 Dune might be the very first attempt to film the “unfilmable”. I remember growing up and seeing stories about how the series of books are so complex there is no way to film them properly. And I think that was one of the reasons I avoided this film because I was almost scared, in a way. I knew it failed on pretty much every level – fans didn’t like it, critics despised it, it flopped hard in the box office and to this day, it’s the only movie of his, David Lynch refuses to talk about, as the memories are so painful for him.

And who could blame him? He didn’t have a final cut, he shot over four (!) hours of footage, but because movies at that time had a maximum length of 137 minutes, that is this film’s runtime… But don’t take my word for it, see for yourself:

David Lynch (January 13, 2006) : “Dune, I didn’t have final cut on. It’s the only film I’ve made where I didn’t have. I didn’t technically have final cut on The Elephant Man (1980), but Mel Brooks gave it to me, and on Dune the film, I started selling out, even in the script phase, knowing I didn’t have final cut, and I sold out, so it was a slow dying-the-death, and a terrible, terrible experience. I don’t know how it happened, I trusted that it would work out, but it was very naive and, the wrong move. In those days, the maximum length they figured I could have is two hours and seventeen minutes, and that’s what the film is, so they wouldn’t lose a screening a day, so once again, it’s money talking, and not for the film at all, and so it was like compacted, and it hurt it, it hurt it. There is no other version. There’s more stuff, but even that is putrefied.”

It was hard to go with my usual “open mind” attitude into the film I knew so much about, how it’s badly edited, how they tried to jam so much complex info into that runtime… I’ve always heard how the books are great but complex. And this movie made the already complex story even more confusing. So, fearing the worst, I finally decided to watch it, just before the latest attempt “to film the unfilmable” came out (there might be a review for the new Dune (2021) coming soon ;-)) to see how bad, confusing and dated this movie actually was. And I am not going to lie; I was surprised at how much I enjoyed myself.

Dune has problems, no questions about that. I am not going to try to spin it, that this is somehow a masterpiece everybody misjudged, but I am the chosen one who sees things nobody has managed to catch in the last almost 40 years now. No. But I never thought it was confusing, I was able to follow the story well enough (as a person who hasn’t read any of the books yet), and the cast was… yes, 80s as fuck. But I somehow felt everybody was trying their best. I liked Kyle MacLachlan‘s performance; I enjoyed Jürgen Prochnow as his dad and the insanity of Sting‘s performance.

As I always say, it’s easy for us to sit on our comfy thrones, judging a film that’s almost 40 years old now and laugh at the visual effects, which were outdated in 1982, let alone 1984 when this movie came out. It’s easy to say how over-the-top everything here feels because back then, studios wanted everything to feel the same, and there is an undeniable Star Wars influence on this film because that was popular at that time. But I am not going to do that. I went into this film as I would go into any other movie, trying to enjoy myself; with what was happening in front of me. Not what I want(ed) to happen what I know now would have been better because I am “armed” with today’s knowledge… and I had a good time.

Honestly, for me, the biggest problem with this movie must have been the studio interference and not giving David Lynch the final cut and the runtime this film needed. Because for most of this film, the story goes someplace and then, suddenly, when things are starting to get interesting, the narrator tells you: “Over the next two years, this is what happened…” And this works against this film on every level. As if you are a “normal” moviegoer, you don’t want to be told what happened; you want to see what happened. And if you are an “abnormal” moviegoer like myself who knows a lot about behind the scenes stories of certain films, that is when you remember why this film had such a reputation. How David Lynch didn’t get what he wanted, and as a result, there are versions of this film where he doesn’t have the director’s credit. Instead, “Alan Smithee” is credited as a director. That is a pseudonym used by many directors who wanted to have their names removed from the final product for various reasons. If you want more information, read it for yourself here. And that is why the time jump kills the film it doesn’t work for anybody, let alone the film itself.

I need to repeat this again – I haven’t read the books. So I understand there might be one thousand and one reasons for the fans to hate this version I have never considered. And as always, movies based on books are tough for me because I get it. I honestly understand if you read the book(s) and you are disappointed with the film because things get changed, or you imagined some scenes/characters differently. But, at the same time, I try my hardest to judge movies based on books solely on the quality of films. The perfect example is the Harry Potter franchise. I have read every single book and loved them. And the movies, even though I love those too, are very different. But guess what? I can still enjoy both because I get it. The books have details, and sometimes, things happen one way in the books and another way in the movies because at the end of the day, it’s a different medium, and also it’s the director’s vision/interpretation of the book. Plenty of people tend to forget that aspect of adapting a movie that many directors can respect the source material, but that doesn’t mean they should be afraid to change a few things here and there if they believe it would improve their movie. And, here’s the final thing about this film – it made me want to read the books.

And maybe that is the reason I have enjoyed myself more than others. I found it easier to ignore things that didn’t work because I was truly invested in the story. When the movie ended, I knew I needed to read it for myself. And not only the first book but all other books in the series (there are six books). And I will do that. Could there be a better recommendation for a film based on a book? If, at the end of it, the movie managed to convince you that you need to read the source material for yourself?

Overall, Dune is a sci-fi film from the 1980s with everything that goes along with that. I went in expecting the worst, knowing very well the behind the scenes stories of how everyone and their mum hated it. To my amazement, I managed to have fun with this film. It’s not perfect by any means. The time has not been kind to the special effects, and some performances were “slightly” all over the place. But I’ve never felt bored. And this movie convinced me to check out the books. If you are like me and have never seen this movie, go and try it for yourself. Especially if you are a fan of old sci-fi films, you might be as surprised as I was that it’s not as bad. Or you might think I went mad because I recommended you this, the choice is yours. 😉