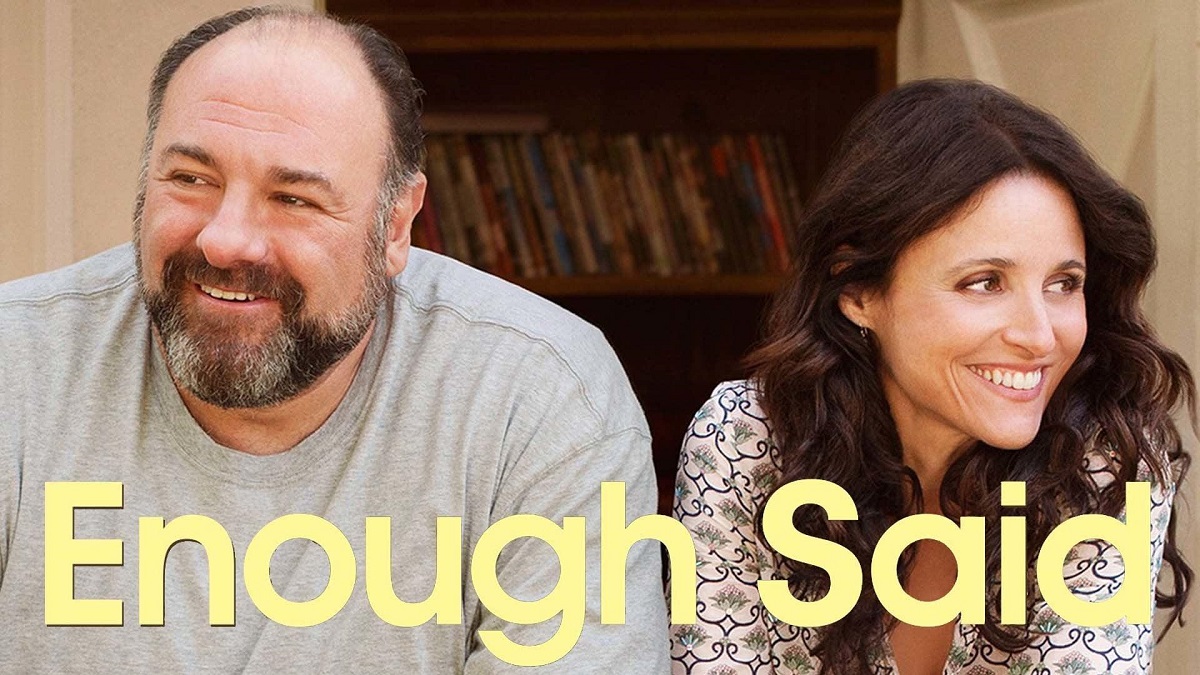 Enough Said was a fascinating movie. We don’t get movies like this anymore, where if it’s a love story, there are mainly about two young people who are trying to figure out their life. I can’t remember the last time I watched a film where the main premise was about two middle-aged adults. Both with kids, both with baggage from previous marriages or relationships, trying to get back on the dating scene and how awkward that can get, no matter how old they are. That initial stage of getting to know the other person can be a bit awkward, no matter how old you are. And this film displays it well.

As with most of these romantic films, if you don’t buy the main’s duo chemistry, you don’t buy the movie. Luckily, here is the first thing this movie has going for it – Julia Louis-Dreyfus and James Gandolfini have that chemistry. And truth be told, I wasn’t expecting them to work so perfectly together, but they did. I think part of it was both were able to showcase something they were not known for per se. Let’s start with Julia, she is known to be one of the funniest women ever, and she has some funny moments in this film as well. But more than that, we see her in a more dramatic role, we see her more vulnerable, and that’s something we wouldn’t have seen on a show like Veep (2012 – 2019). The same goes for James; he was mainly known for being Tony Soprano in The Sopranos (1999 – 2007), where he plays the head of this mafia family who can be ruthless. And in here, he gets to show his “more real” side. As he would often say, he was nothing like Tony; he was more like “a 260 pound Woody Allen“. And more than that, in this film, you can see him being this goofy, vulnerable guy who has his flaws, but he means well.

Speaking of flaws, let’s talk about why I enjoyed this movie as much. I appreciated how it portrayed Julia’s and James’ characters as people. Let me explain, in these romantic films, you usually have one wrong person and the other one; who is pretty much correct/right. In Enough Said, you watch both of our protagonists making mistakes and questionable decisions. Neither Julia nor James are flawless, but neither of them is “horrible”. And we get to watch how this film deals with that and plays around with that aspect.

Take the core story in this film, where you quickly discover Julia’s new customer and soon after, a best friend (Catherine Keener) is, in fact, James’ ex-wife. Given this is stated in the official plot synopsis, I wouldn’t consider this spoiler. Julia’s character knows that situation is wrong because she is trying to build a relationship with her ex-husband, so she should say something, but she does not. And not only that, she starts to fish for more information about his annoying habits. Of course, that quickly seeps into her relationship with James’s character, as Julia’s character is now hyper-focused on all these tiny little quirks that might not even irritate her, yet now she knows they used to annoy somebody else. It is exactly like when you meet somebody new, you are having a good time, and then your friend would point out: “By the way, you don’t mind how they do x, y or z?” And it’s not like you would mind that, but by your friend simply mentioning those, you will focus on that and nothing else. It might reach a point where you stop taking the person for who they are and instead see them through another person’s lens.

Another aspect I appreciated about Enough Said was that even though it might be a bit predictable at times, it never seems to fall for the obvious traps at the obvious moments. If you have seen a movie or two, not many things will surprise you here, but what surprised me was how I thought this thing would happen and for it to happen, but later on, not right then. Also, the drama seemed (to me) resolved in a more adult way than most of these films, but that might be due to most of these films being romcoms with teenagers or young adults. These people were both middle-aged, so not only does it makes sense it fits with everything.

Overall, Enough Said is a lovely film that hits you most unexpectedly. I went in expecting a decent rom-com starring the late James Gandolfini, who died a year after finishing this movie, so he never even saw the finished film. To my surprise, I got an intelligent rom-com starring two “normal” looking people with actually relatable issues they have to sort out. Maybe that is why the film worked for me a bit more, because even though both are well-known actors, neither Julia nor James are/were “mainstream” famous and neither ever felt too “Hollywood-y” to me. Or maybe it’s just I miss James and think he died way too soon. I can see him on the strength of this performance alone having a second career in more serious films, where he could have stepped out of the “Tony Soprano” shadow and shown us his serious side rather than the “cold-blooded killer”. If you want to remind yourself that he was a talented actor and want to see Julia giving a superb performance in an intelligent movie, put on Enough Said.