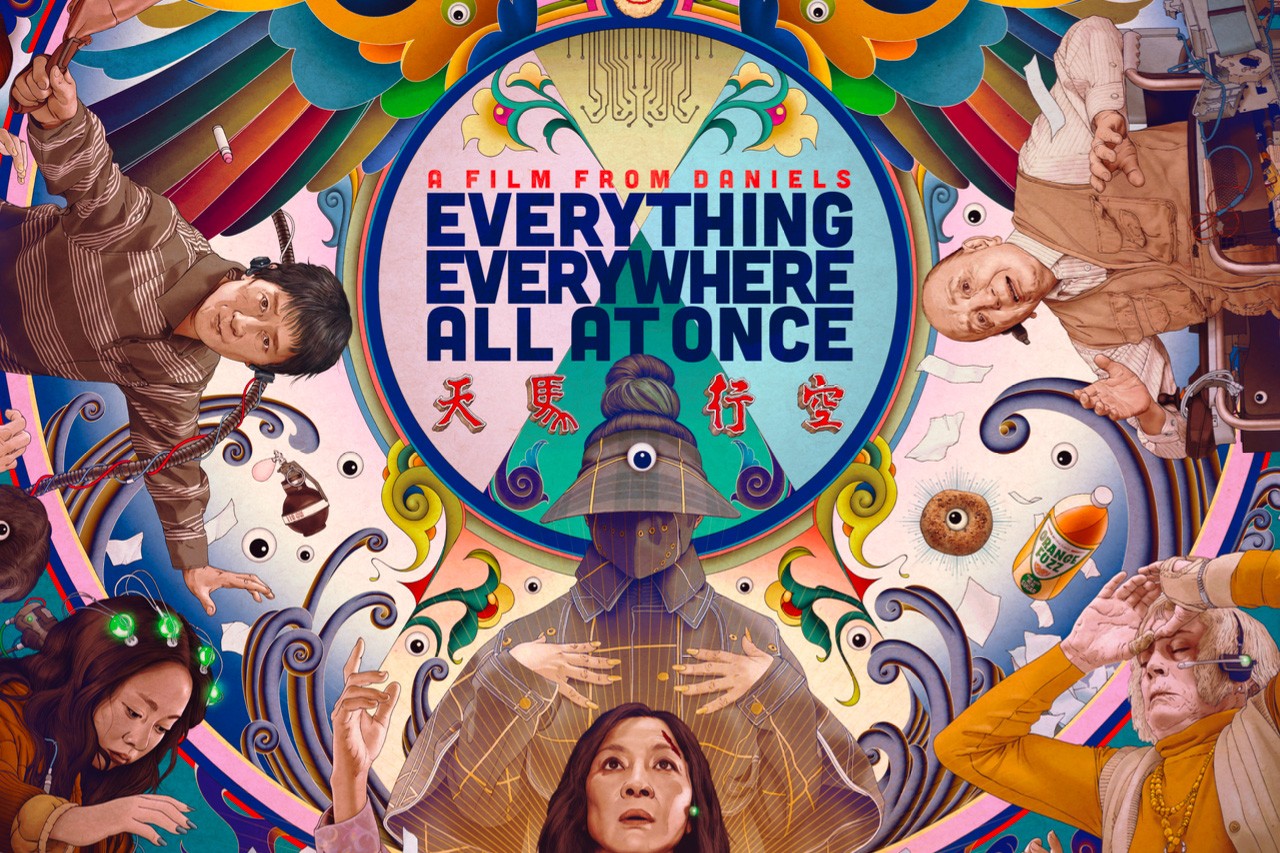 If you are into movies whatsoever, if you consider yourself a movie fan or a cinephile, you must have heard of this film by now. I can’t remember the last time a relatively small movie made such a splash, word of mouth travelled that fast, and it became the highest-grossing movie produced by A24, at least in the US. It also became (for a brief period) the best-rated movie on Letterboxd (if you are there, don’t forget to give me a follow. Yes, shameless plug, I know). While writing this review, it dropped to number three of all time. So yeah, no pressure in seeing it, right? I mean, how could a movie possibly live up to this kind of hype? And I couldn’t see it any sooner as it came to Scottish theatres middle of May, so by the time I was seated in the cinema, everybody and their cinephile mom were raving about this film. I was as excited as I was scared that somehow, this won’t live up to the hype. But guess what? It superseded my expectations.

Everything Everywhere All At Once is the best example of taking a concept that’s been very popular lately (multiverse) and using it as a tool for your story. But at the same, the movie isn’t about “look how well we can utilise this concept!” no. I mean… yes, it’s partly about that because they (and by they, I mean the writers and directors Dan Kwan and Daniel Scheinert) go fucking wild with it. Literally, anything goes in this film. But ultimately, they are smart enough to tell a personal story, in between all this multiverse madness anybody can relate to. And it works. It works so beautifully I don’t understand how it works. How does a movie like this exist? How can somebody make those bizarrely funny scenes to be hilarious and not cringy? How come a film can make you emotional by just showing you some rocks? That is what I mean by wild this movie takes the multiverse concept and doesn’t just run with it; it straight up flies with it into the stratosphere. And yet, somehow, it never forgets the “simple” story about one family; that is at the heart of this movie. How did they make it so effectively?!

I believe a big part of the movie’s success is the actors. Five actors are somehow important in this movie’s success – Michelle Yeoh, Stephanie Hsu, Ke Huy Quan, James Hong and Jamie Lee Curtis. The thing is, you could argue that any of those are the “heart” of the movie to an extent because this film digs deep into relationships. It examines the relationship between mother and daughter (Michelle and Stephanie), wife and husband (Michelle and Ke Huy), between generations (whether it’s dad and daughter or granddaughter and granddad) or your relationship with the outside world (everybody and Jamie Lee). This movie touches on everything, and somehow, not one of those felt short shifted. The film is almost 140 minutes long, but somehow it felt longer and yet shorter at the same time. What Everything Everywhere All At Once manages to address within those 140 minutes felt incredibly packed (because it is, it goes through so many things), but it also felt short. I wouldn’t mind spending another 30 minutes in this world because the movie just flew by.

Let’s discuss these actors. Michelle Yeoh is phenomenal in this role. She is funny; she kicks some ass, she is serious… While watching this film, you almost feel like saying: “Ok, Michelle, we get it, you can do it all. Can you stop showing off and making it look so easy? Thanks.” But not really, because I was flabbergasted by her performance. Other actors on the same level as Michelle were Ke Huy Quan and Jamie Lee Curtis. You might know Ke Huy from Indiana Jones and the Temple of Doom (1984). Yep, he played Short Round. His character needs to be on the same level as Michelle’s character otherwise, their chemistry wouldn’t have worked as well, and boy, did he deliver. He goes from funny to earnest without a flinch. And, he might have the most heartbreaking line of this entire movie, where you truly understand his character and what he stands for; what a brilliant performance by him. And Jamie Lee Curtis seems to be having the most fun in ages with her role of IRS clerk. She is as committed to every single crazy decision her character goes through as anybody in this film. The thing with her character, in any other movie, it would have been just that “mean, old, possibly racist lady”. But in this film, not only the script gives her more to do (due to the multiverse nature), but Jamie Lee sells you that performance. She also has some touching scenes with Michelle’s character.

Stephanie and James are equally important to the overall story (mainly Stephanie), but they are not on the same level as the previous three performers. But this isn’t a negative; quite the opposite. The only reason they aren’t on their level is that for the story to make sense, they can’t be. They need to be on a different level and do separate things with their characters, not try to match them. And they both do it beautifully. I can’t wait to see Stephanie in more films and James… This film made me realise that this man has been in so many different movies it’s low key insane. He has 453 (!!!) acting credits on IMDb and was born in 1929. Yep, acting for most of his life, he’s always a welcome addition and finally got a bigger chance to shine in this film, and he nailed it. The same goes for Stephanie; she played such a relatable character so well that one can’t help but root for her. Even if she creates the “everything bagel”. What does it mean? Go and see the film for yourself!

That’s right, I won’t go to spoilers, even if that means I can’t discuss everything properly. But I would encourage everybody (everywhere, all at once!) to go and see and discover this movie for themselves. If you have never heard of this film (somehow), that’s awesome. Don’t watch any trailers, don’t look up any information about this film, go and support it in your local cinema.

Everything Everywhere All At Once is the perfect example of what originality means. Because many believe there are no more original ideas anymore. And to a degree, that’s correct. Everything has been done, said, performed or sung before. But where originality lies and can still be found is in movies like this, where they utilize a concept we are all familiar with (multiverse), centre it in a story that’s intimate and relatable and have fun with everything else. Because that is what this movie ultimately is – it’s part drama, part comedy, part sci-fi, part action, but ultimately, it’s a whole package. It’s like a dish you make, and you put everything (everywhere all at once!) you find in your kitchen into that dish. 99% of the time, it fails because there is simply too much happening in that dish. But occasionally, there might be that 1% where you put combinations together that shouldn’t have worked but somehow, they do. This movie is that in a nutshell. I believe if you were to read a full-on spoiler description that tries to explain everything (everywhere all at once!) that happens in this film, you might think: “There is no way this movie will be any good!” But this film is in that 1% where it shouldn’t work. It shouldn’t be this good, and yet, it is.

Overall, Everything Everywhere All At Once needs to be watched by as many people as possible. I wish nothing more but for this film to be seen by the masses, by those who complain “there are no more original movies anymore”. There are, but you need to support them. You must show up when people tell you it’s actually a great movie. And I beg everyone who reads this review (albeit it might be only a few people) to go and see it if they haven’t. Fuck it; even if they had, go and watch it again. I will, and I rarely re-watch movies, let alone in the cinema. I will take my girlfriend to see this movie and try to convince more people to give this movie a chance. If you go and see it, don’t go into it thinking: “I might see the best movies ever made.” No. Go into it thinking: “I might see one of the most original movies ever made.” And whether you like it or not, I can guarantee you, you won’t see a more original movie in the cinemas this year. There is so much more to discuss I could write another 5000 words; nevertheless, I don’t think I would do this film justice. Everything Everywhere All At Once surpassed the hype. It’s truly all I wanted it to be and more. I can’t wait to see it (in the cinema!) again. And then, many more times at home. It might be too soon to say this, but I can’t see any other movie topping this one, at least regarding my personal TOP 19 films for 2022. And what a year it’s been, and we are not even halfway through!

That’s all for this one! Did you see it? What did you think abou it? Let me know!