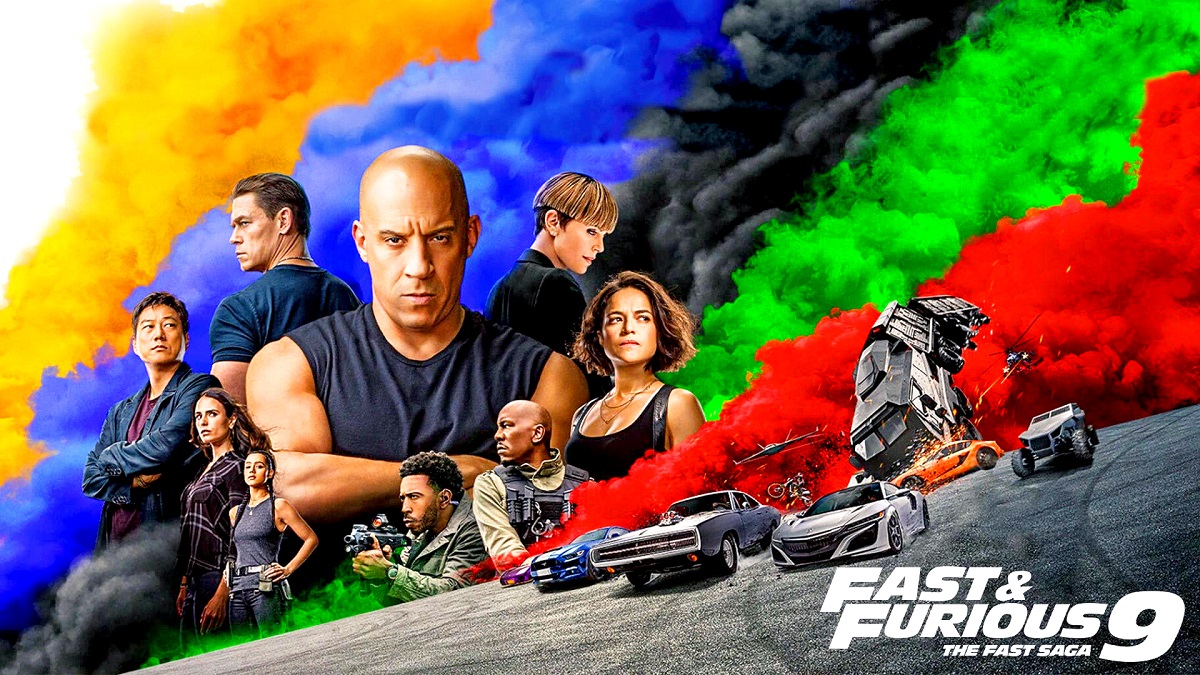 I love films. I love clever films, but at the same time, I love “dumb” films. I strongly believe in judging any movie based on its merits rather than comparing a comedy to an Oscar-winning drama. For this reason, I tend to rate movies higher than your stereotypical movie critic because I am not a movie critic. I have always called myself a cinephile, a movie lover. With that being said… fuck this film. I can have fun with “dumb” action movies (after all, I grew up on those cheezy action films from the 80s and 90s). But if the ninth film in a franchise becomes “all bets are off” kind of a movie, and there are LITERALLY no stakes to any action happening on the screen, that just infuriates me.

Fast & Furious 9 (or F9) embraced the ridiculous premise of fans all over the world, who were pointing out how this franchise evolved from fast cars and racing to heists and “family” and asked: “Well, what are they going to do next, go to space?” And filmmakers behind this movie went: “Hold my Corona.” And they did. Look, I know you wanted to be cheeky, but Jesus… As with everything, too much of one thing can kill you or make you not like that one thing. Take pizza; I often think how I could eat pizza every single day, except when you truly think about it, that’s dumb, it wouldn’t make sense, it wouldn’t be healthy for me, and also, after some time, it would no longer be my favourite food. I’d get sick by just looking at pizza. And that’s how I felt about Fast & Furious 9. Where I could have found fun with the first three or four movies, the moment Dwayne ‘The Rock’ Johnson joined this franchise, it officially jumped a car, a helicopter and then a submarine. With each new episode, I found myself having less and less fun. But holy shit, was he helping to keep this franchise afloat as this film without his charisma struggles. Yep, as much as I like Vin Diesel and admire what career he’s made for himself, he isn’t as charismatic as Dwayne. But the lack of Dwayne isn’t the main issue, no. The main problem is the lack of any stakes. You could rent the world’s best and most advanced microscope, and you would still struggle to find at least any hints of something remotely resembling stakes.

Some of you might be thinking: “Damn, it only took you eight films to realise there are no stakes in these films?” And to those people, I would say, no. I always knew the stakes were low to minimal in this franchise, but they existed. What F9 has done differently from its predecessors was it turned into a full-on telenovela and removed those tiny stakes which existed. I won’t even mention that we have yet another “long lost family member” in this film again. That has been spoiled even in the official trailers, but just in case you haven’t seen those, I will put the spoiler tag because we need to talk about this…

This franchise has been dealing with one thing on a pretty consistent basis – its hatred for The Fast and the Furious: Tokyo Drift (2006) as that was, what I would argue, the last “proper” Fast & Furious film. Because that movie is mostly about racing, there are no international problems that somehow only a team of racers can solve. Racers who somehow can pull off anything they put their minds to. Well, that’s the American way. Anyway, another reason this franchise hates Tokyo Drift – they killed Han. How dare they kill that one character we didn’t know would be so… crucial to the story previously? As they, of course retcon him to the movies after the fact, making Tokyo Drift (for the longest time) the future one. That is already bit too convoluted for a franchise whose sole focus should have been fast cars, but ok. Anyway, when it seemed that we were finally over it, this #JusticeForHan thing started, and yet again, filmmakers decided: “You know what? That character WAS the heart of this franchise; we need to bring him back.” And they did. Han lives. After being dead since 2006, but appearing in some films since then because they were technically in the past… he’s officially back and alive as they YET AGAIN go back and retcon Tokyo Drift so effectively that film no longer matters. And why would it? What do you want for choices to matter? Get the fuck out of here…

See what I mean by Fast & Furious 9 killing even that last bit of stakes? Now not only you don’t have to be afraid about anybody dying in these films ever again but even if they somehow do, don’t worry, they will be back again! Well, except for Paul Walker because he is literally dead. But guess what? That doesn’t stop this film from talking about him and even making somebody pretend to be him in the last scene, where his car shows up. I swear, I wouldn’t be surprised if, for the next sequel, they actually bring him back using CGI. Because that seems like the respectful thing to do, rather than… I don’t know, maybe retire his character where he is living the life or something like that. No, we need to dangle him in front of the audience because of… family? Money? Yeah, it’s money.

Do you feel despair? Because this film made me honestly desperate. What makes me the saddest/maddest about this situation is how they were talking about Fast & Furious 7 (2015), how that was for Paul and all that, and they actually somehow managed to give him a pretty sweet send-off in that film, despite the odds. But now they literally waiving his name and car in your face again cause “family”? And I wasn’t a big Paul Walker fan, but I thought he seemed like a chilled dude, and of course, I was sad when he died.

To be fair, it’s not just this Han/Paul Walker stuff that bothered me, no. The movie was irritating to me before that as all the set pieces are so unbelievable, it’s genuinely hard for me to “switch my brain off and have fun”. When all the stunts are CGI because they must be CGI, it’s hard for me to feel any excitement. Or where people use literal cars to break somebody’s fall, more than once. Yes, you can break someone’s fall using a car but not without breaking their spine, bones; you know, the entire body in the process. And that’s just one example of how lazy this franchise has gotten. A movie with no stakes is where any tension goes to die.

The only thing I semi-enjoyed was the sequence in Edinburgh, as I’ve been there on a few occasions, so it was fun seeing the streets I walked on being in a movie like this. Because as much as I didn’t enjoy this film, it’s still a Hollywood blockbuster, no doubt about that. And it made money too less than what was probably expected but still enough to warrant a few more sequels until they go… where can they even go next? The moon? The sun? All bets are off for this franchise, and in this case, it’s not a compliment.

Overall, Fast & Furious 9 is a film I didn’t enjoy at all. It didn’t work on any level for me. For a “dumb” action film, it was too dumb and wanted me to suspend my disbelief way too much; for an “end of the world” film, the stakes were non-existent to start with, so of course, that aspect and the entire plot of this film is boring. Yep, for a movie about fast cars, double-crosses, and people going into a space, I was bored. And that’s “probably” not a good thing, being bored while watching an action film. I wouldn’t waste my time on this film if I were you.