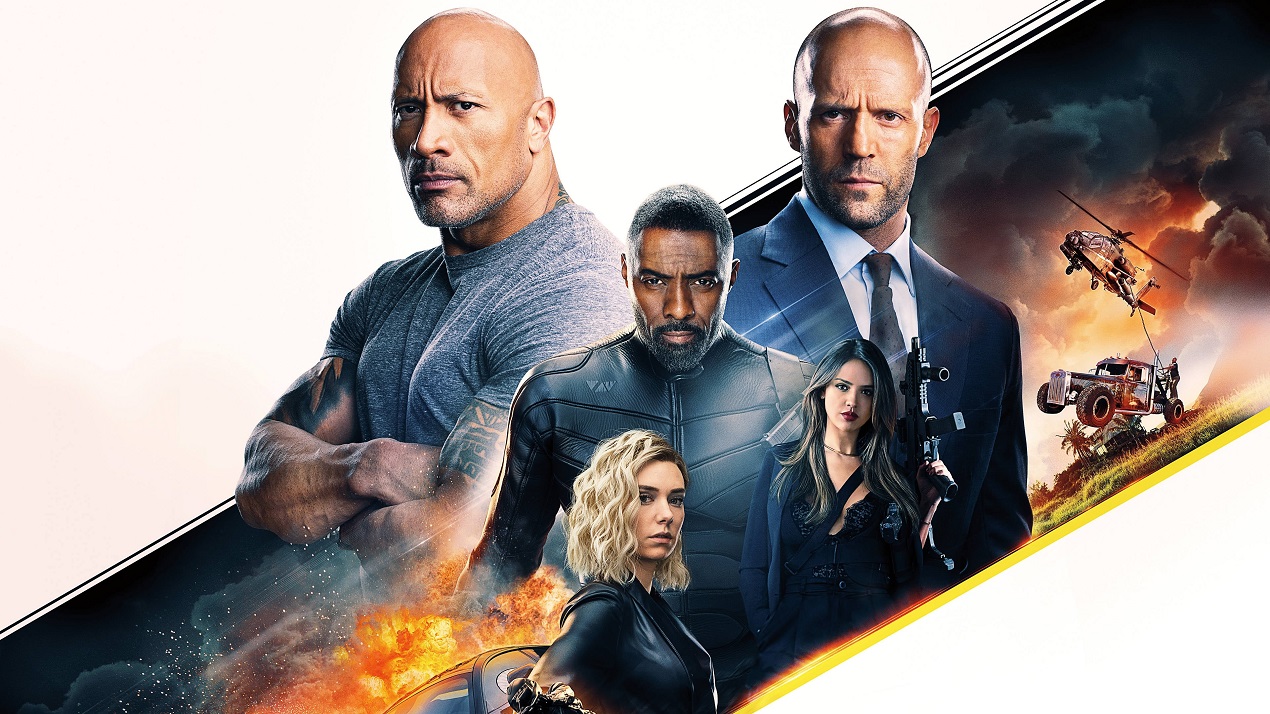 After the horrible, boring, no good at all Fast & Furious 9 (2021, my review here), I dreaded “finishing” the series. I know that technically, Fast & Furious: Hobbs & Shaw (or how it’s also known as Fast & Furious Presents: Hobbs & Shaw) is its own thing. I knew it was a spin-off, but it still takes place in this world where nothing exists except for sexy ladies, quick and luxurious cars, and where the laws of physics, gravity and common sense go to die. But I’ve heard enough decent things to be at least tempted, and the completionist in me was saying: “Common on, it’s only one more film set in this world, then you are done with it for a while.” So I put it on one evening, expecting the worse but surprisingly, I had a decent enough time? Yeah, go figure.

Let’s make something clear, Fast & Furious: Hobbs & Shaw isn’t a movie I would call “great” or “awesome”. It might be my recency bias, still remembering that last Fast movie, but I had a good enough time with this one. I believe it’s mainly due to the casting and the story that doesn’t take itself seriously. But, probably and most importantly, by focusing on Hobbs and Shaw, we can finally stop pretending these films must have some ties to fast cars, racing, and all that. That ship had sailed about ten years ago.

Yes, it’s mainly about the cast and them having fun with everything that translates to you. Yeah, we have Dwayne Johnson and Jason Statham as our protagonists, and they are fun, but I would rather talk about the rest of the cast. Mainly Idris Elba, Vanessa Kirby and Ryan Reynolds. Let’s start with the “Black Superman” himself, Idris. He is one of those actors that instantly improves any movie he is in by simply being there. He doesn’t even have to open his mouth, he could be standing there, saying nothing at all, and I would still go: “Loved it, Idris! Have my money!” And in this film, he gets to be the antagonist, an almost indestructible man who is hard to stop. Sure, he calls himself “Black Superman”, but he seemed more like Terminator where he was this unstoppable machine. What I liked about his performance in this movie; was that you could tell his character believes in what he does. He doesn’t think of himself as the villain. And when you have an actor of Idris’ calibre, you believe him.

The more I see Vanessa Kirby, the more I adore her. Sometimes, it is as simple as that. Her character is not only a surprise family relative of one of our protagonists; she is somebody who can kick your ass and look great doing it. Browsing through her filmography, I really need to start watching The Crown (2016 – 2022). And what else can be said about Ryan Reynolds? Does he yet again play a variation of himself? Yes, he does. Am I getting sick and tired of that schtick? Nope. For some reason, it still doesn’t bother me when he plays that one character. I believe that at this point, his smarmy, slightly asshole-ish character is linked with him so tightly that I kind of expect it now. It’s the same “link” I have with Arnold Schwarzenegger‘s accent, Pamela Anderson‘s boobs or Will Smith slapping the shit out of somebody who dares to mention his wife’s name.

Weirdly enough, the highlight of this film to me was the last hour or so, when the final action takes place in Samoa. I don’t understand why it worked so well for me, but there was something fun when, for the entirety of Fast & Furious: Hobbs & Shaw, we mainly see and deal with technology, and in that last fight, we get down to “bare bones”. Just some good old fashioned guns, tools and Samoan warriors…? Yeah, why the fuck not. Because by that time, the movie showcases to you that there are almost no stakes and this cast and this specific story (about a cyber-enhanced people who are pretty much indestructible) somehow made me not care about it and enjoy this ride. And that final fight and whole “going primal” thing worked for me.

However, it bears repeating that this movie isn’t “great”; by any means. It’s still slightly above average techno-babble, full of sexy, fit people, insane action sequences and a story you could pick apart if you focus for longer than ten seconds. Yet somehow, this film made me care less about those aspects, and I have managed to enjoy this movie enough that I might, very cautiously, recommend it to people. Not every film needs to be an Oscar-winning drama about the meaning of life, and this film is precisely the polar opposite of that. It is a big, dumb, loud, colourful, moving vehicle that mainly runs on petrol, adrenaline and testosterone, but it avoids looking dumb or pretentious. And that must count for something. Or, again, it might be my recency bias and my hatred for the Fast & Furious 9 that made me appreciate this film a bit more? Or possibly the fact this cast looked like they actually had fun and didn’t take themselves too seriously? All of the above? Yeah, I am thinking all of the above.

Overall, Fast & Furious: Hobbs & Shaw is precisely that type of film you might expect from something that only exists because two actors had decent enough chemistry on the set of a different movie. It’s your old fashioned “buddy cop” movie, except, in this case, they are cops but also break a lot of laws, cause enormous damage and are careless overall? Yep, your stereotypical buddy cop formula, updated for our time, starring some of our hottest actors available. And you are either here for it or not. This film managed to catch me in a good enough mood where it seems like I enjoyed myself just enough to say if you like big, dumb blockbusters full of A-listers, you will love this film. It’s definitely the best film the Fast franchise produced in almost a decade. I am not sure whether that says more about the quality of the Fast franchise or the quality of this movie. I will leave that up to you.