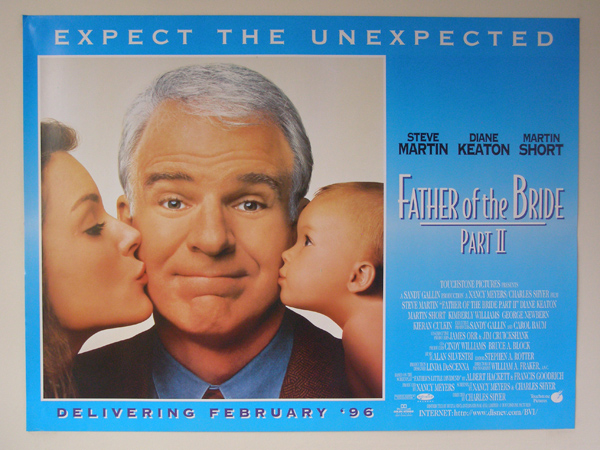 As I have established in my review for the Father of the Bride (1991), both of these are movies I grew up on. Not only that, but we had them taped on VHS (remember those?) back to back, so every time the first movie would finish, this one would start playing. And I believe almost every single time, we would watch them both, back to back, with no regrets.

Father of the Bride Part II is one of those rare sequels, that to me doesn’t loose any of the charm of the original film, but builds up on it. The main story revolves around Kimberly Williams-Paisley‘s character being pregnant, while there is another, slightly more unexpected pregnancy, as Diane Keaton‘s character is also pregnant. And thus hilarity ensues.

I think where this film “wins” is this is the biggest stretch, that viewer needs to get on board with, that both mother and the daughter are pregnant at the same time. But it doesn’t really go overboard on anything else. And this is where other comedy sequels don’t deliver. They try to do everything the same, but bigger, and plenty of times the characters suffer from it. Whereas this film feels like a logical continuation of the first one, where all characters we know actually still act the way we would expect them to. Steve Martin‘s character is trying to come to terms with becoming a grandfather, while also having to deal with a fact he needs to raise a baby no. 3, both “most important women of his life” are having the usual pregnancy struggles and Kieran Culkin‘s character is preparing for a new role, being the “big brother” for the first time in his life.

As with the previous film, in its core, it is a really simplistic movie. And yet again, it wins because of its simplicity. It’s not trying to go over the top with any situations (well, maybe with the sleeping pills towards the end, but then again, that scene gives Steve’s character the comedy highlight of this movie, so it evens out) and it still feels relatable and down to earth. Especially with its message about not only moving on, but moving a way further on the opposite side of the USA. And to me, a somebody, who has done that and moved to Scotland from the Czech Republic (I refuse to call it Czechia!) almost 10 years ago now, that hits really close. Unless you go through something like that, it’s hard to describe not seeing your family “live” for a year or two, missing out on all birthdays, anniversaries etc. Especially on my latest re-watch, that part really resonated with me. The hopelessness/hopefulness when your loved one moves away, and you are both happy for them, but also sad, as you won’t spend as much time together as you might want/need. Except in my case, I was the one moving away.

But back to the movie – it’s exactly the same as his predecessor. Meaning, if you enjoyed the previous movie, you will most likely enjoy this one too. If the first film wasn’t your cup of hot cocoa, you would probably want to avoid it, as it won’t offer you anything new. But sometimes, you don’t need/want anything new. Sometimes, you just want to watch a warm blanket of a movie, that makes you feel cosy, happy and comfortable. Father of the Bride Part II is that movie. Realistically, it’s not flawless movie, but I cannot rate this any lower.