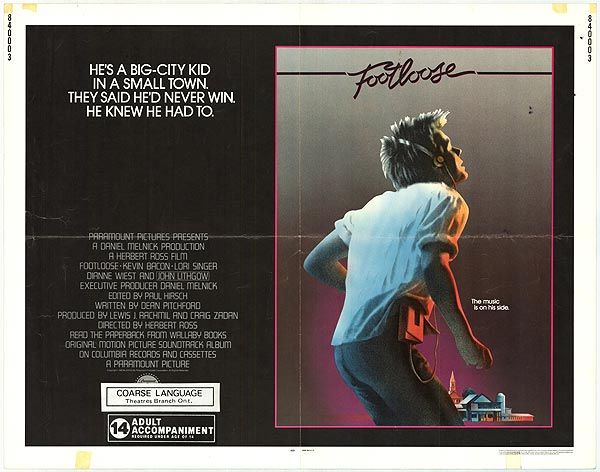 Have you ever wanted to see a movie, that is so 80’s, it’s almost offensive? Well, look no further, as Footloose it’s exactly that! It’s got everything! Dancing, montages, teenagers, fashion, hairstyles, kick ass songs that are somehow great within the movie and outdated outside of it, and on top of it all, there is really, really young Kevin Bacon.

The main crux of this story is quite simple. Kevin Bacon’s family moves into the town that for reasons, banned dancing (which according to the IMDb’s trivia section, was loosely inspired by true events, where small town in Oklahoma banned dancing until teenagers challenged it) and of course, that is the only thing this teenage sensation wants to do. So he get’s together with bunch of local kids and rebels against the system. And… that’s pretty much it.

And to be honest, sometimes, that is enough. Footloose might not be a cinematic landmark, that will be celebrated for its challenging views and deep philosophical discussions, but as far as entertainment value, it holds your attention for most of the time, and it didn’t age as badly as some others 80’s comedies. Plus, the songs are catchy, and the movie does transport you to the simpler times of when you were a teenager, trying to make your mark on the world, trying to go against the system, to stand for something.

What works in this movie is the hero (already mentioned Kevin Bacon) and the “villain” John Lithgow as he’s not just some two dimensional character. You can actually see and understand his motivation (his son died in a car accident, where he was killed by bunch of drunk teenagers) even though he’s going slightly overboard, you can understand where he is coming from. Also his final “revelation” was I thought believable enough, as it didn’t seem forced.

Only thing that goes against this movie in my mind is that there is no standout, no one scene that would stick with you. It’s been a couple of weeks since I watched this movie for the very first time, and I am going to be honest with you, except the main plotline, young Kevin Bacon and the fact that this movie was so 80’s it puts anything else from that decade to shame, I can’t recall anything else. That is why my rating is what it is, but who knows? Maybe one day, I will re-watch it and discover something else, something I have missed, but it is possible, that Footloose is just a movie, where baby faced Kevin Bacon really wants to dance. And to reiterate, that might be enough.