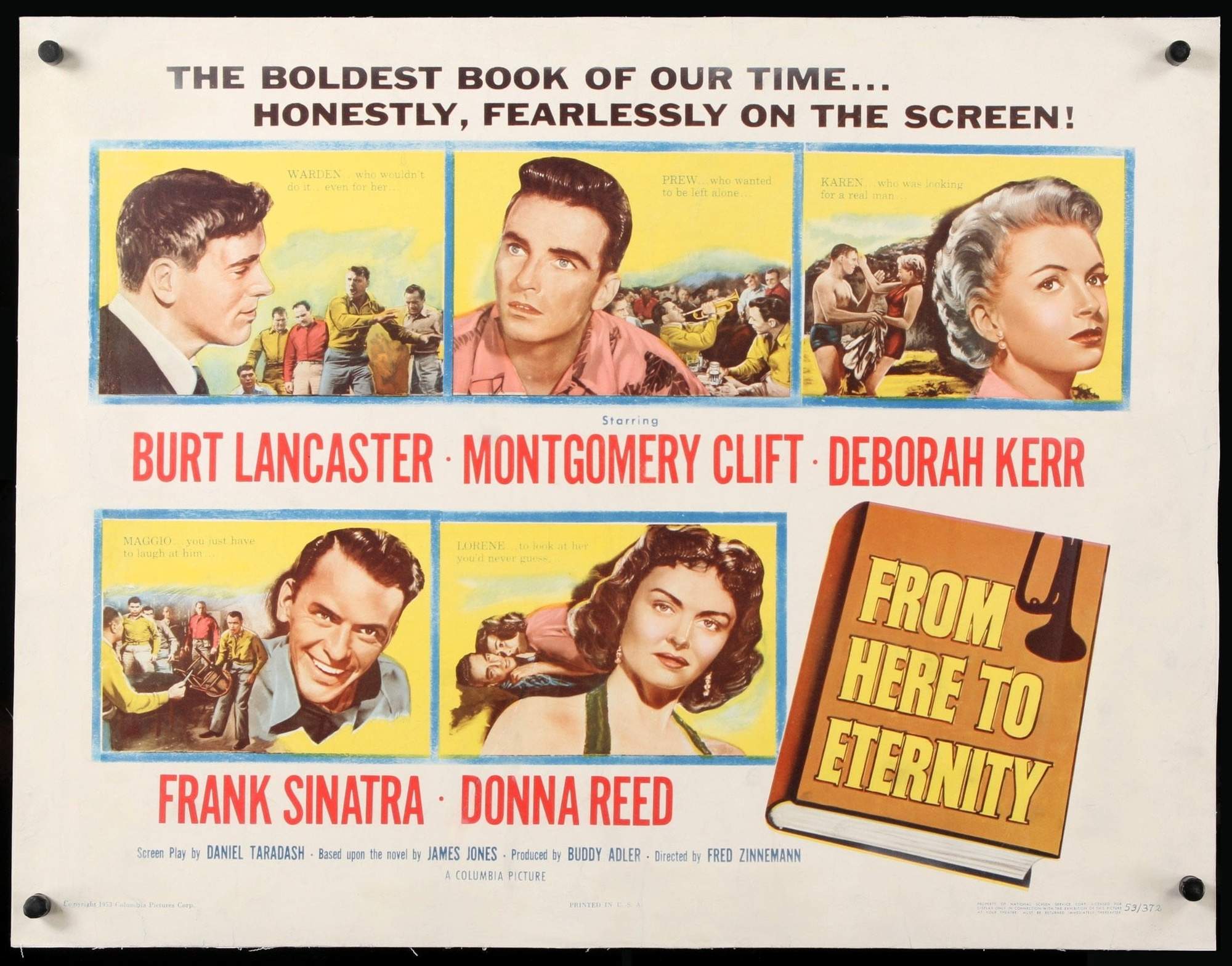 This movie might be the perfect example of how something like winning eight Academy Awards (including Best Director, Screenplay, Supporting Actor, Actress and Screenplay) doesn’t guarantee your movie “legacy”. Because it feels like this movie isn’t talked about today at all, unlike different films from the same era. But funnily enough, what if I told you, you have seen a piece of this film parodied to death, or at least paid homage to? Yes, it’s true. The famous beach scene (that was parodied in a variety of movies starting from Airplane! (1980, my review here) to Shrek 2 (2004), just to name a few) we all know and love originated in this film. So you could say that weirdly, this movie managed to make a mark on pop-culture history, but it seems almost unintentionally.

From Here to Eternity is everything you’d expect from a movie made in 1953. The pace is slower than usual, characters can be slightly over the top sometimes, and you can bet the acting is anything but subtle. And yet, there is something about this film that keeps you interested. I think the movie’s main selling point is impending doom. As we know, what happened in Pearl Harbor, you are just patiently waiting for it while getting to know these characters.

For me, this movie is about the unbreakable nature of the human spirit. Aka, if you are stubborn enough not to box, your superior officer will do everything in his power to make your life a living hell. That was the most intriguing part of this film, seeing how much Montgomery Clift‘s character endures throughout it and whether he breaks or not. He was by far the most compelling character to watch. Well, him and Donna Reed. I wondered what she was supposed to be, and then I read some IMDb trivia that cleared it up:

Censorship at the time meant that Donna Reed‘s character was never referenced as a prostitute, but as a nightclub hostess.

And if you read through more trivia, you will find that the movie had to tone down plenty of things. From how much Clift’s character endures throughout the film to profanity and some homosexual content that didn’t sit well with people back in the 1950s, let alone with the Army. And that got me intrigued to actually read the book, as I would love to know how much they have toned it down. Because I thought the movie was done well enough.

I know this might be almost a heresy to say, but if the book (aka the source material for this film), was changed so much, it would be intriguing to see what could modern-day filmmakers be able to do with it today. I know I won’t earn any “brownie points” with film people for suggesting a remake of a classic (?) that won eight Oscars. But to me, a long time has passed, and I can see the space for improvement. Plus, if you think about it, tangled up love stories, Army abuse, gay themes… the story would work today, and except the Pearl Harbor thing, you wouldn’t know.

Speaking of Pearl Harbor, let’s talk about it. Since we’ve it done a few times, it’s hard not to compare this to other, more modern/flashy movies. And yet, there is something in this film’s simplicity and the way it approaches this topic. Because it works with you, as the audience, your knowledge that you know what’s coming. That knowledge allows you to be slightly on the edge just waiting for it, or get so wrapped up in the story, that once it finally comes, you will almost go: “Oh yeah, of course, we need to cover that.” And for what it’s worth, this movie did it effectively. You can feel the sense of urgency, loss and hopelessness. I knew it was coming, and I was waiting for it and still was surprised how they managed to portray the attacks. If you think about it, it’s “ancient history” now (even though it really is not), but at that time, it was only 12 years ago. That must have had some effect on the audience.

Overall, From Here to Eternity is a film that gets better with each minute. From the romance I didn’t care about until I kind of did to the Pearl Harbor sequence towards the end, it’s worth seeing. However, you need to accept this movie on its terms and understand that in the early 1950s, this is how they made films. What I mean by that – mainly the pacing might deter a few people as it can drag on a bit at some places. Also, some acting performances can seem silly, rather than “great”, because we judge them by today’s standards. But if you get over all of that, you might enjoy this film. If for anything else, you will finally see where the famous beach is from.