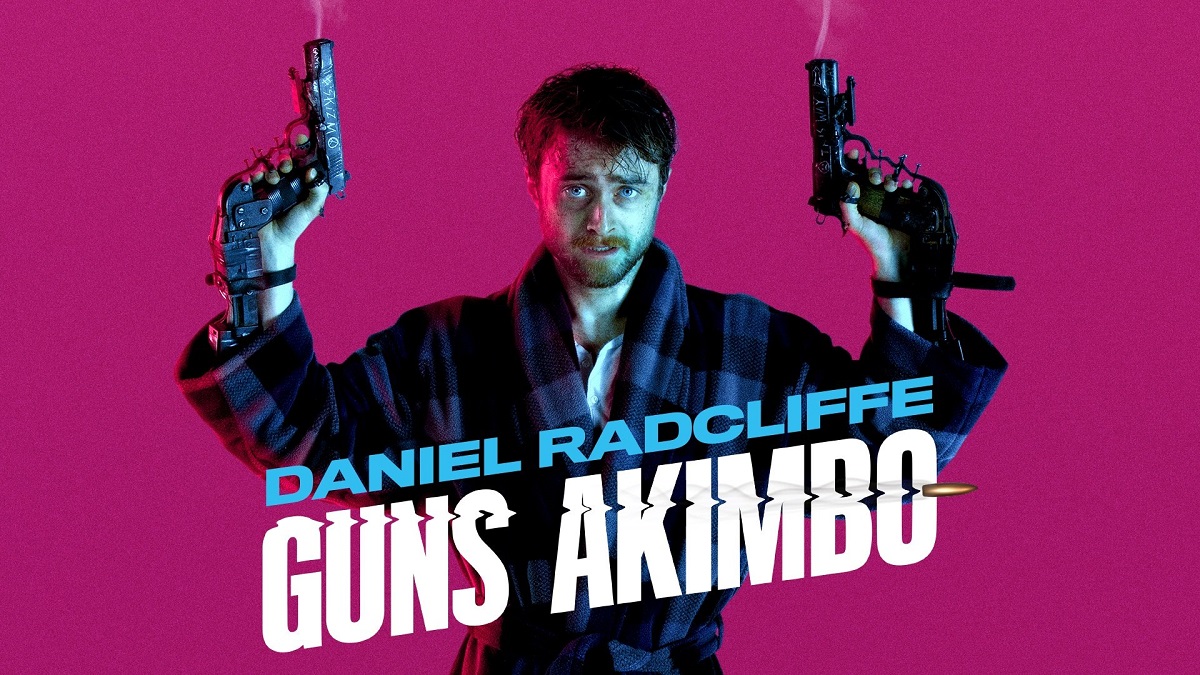 As I have mentioned in my review for The Peanut Butter Falcon (2019, my review here), I admire Daniel Radcliffe. Or, to be more precise, the way he took charge of his career after he was done with the Harry Potter franchise. If you think about it, he was the lead of a massive (and still to this day most successful) young adult franchise. He must have been swamped with different offers for many big, mainstream films. And he said, nah, let me just do something smaller for less money but with a more intriguing pedigree. Sure, he still does big movies every once in a while, but if you look through his filmography, he mainly does indie films, intriguing movies like Swiss Army Man (2016). That, by the way, is also a strong recommendation as that is a highly unusual yet surprisingly lovely little film. Anyway, Guns Akimbo is in the same vein as Swiss Army Man, as it’s a film with a smaller budget but an interesting idea behind it. And besides Radcliffe, there is another performer who seems to be almost a guarantee of a great movie every time I see her – Samara Weaving.

Did you see the movie Gamer (2009)? If yes, you might have a decent idea about what you are signing up for with Guns Akimbo, as those movies are pretty similar. Except here, Daniel’s character (Miles) isn’t an “avatar” somebody else is using to play a real-life “shoot ’em up” game he gets forced into playing by… well, being a bit of a dick on the Internet. The idea of this film is simple there is a company that streams people fighting to the death live on the Internet, almost like modern-day gladiators, except more violent, with guns and a much larger audience. And one evening, Miles is trolling their website, so they pay him a visit and bolt guns to his hands. So whether he likes it or not, he is now a part of the game as well. And, of course, he is on a schedule of kill or be killed. And Samara’s character (Nix) is the one who is killing it (in the game and literally). That’s the basic idea of the story.

And as you would imagine, it gets insane quite quickly. But that’s the thing, you either are with it or not, and the movie announces itself early on. I appreciate films that do this when they let you in within the first five to ten minutes, and you know what you are in for immediately. Guns Akimbo is a hyperactive action movie that is a simple, straight-up fun with two brilliant performers who are not afraid to go for it. Let’s talk about them a bit more, shall we?

Everybody on this planet knows Daniel Radcliffe. But I still remember many would discredit him simply due to his involvement with the Harry Potter franchise; they would say he would get forgotten right after that franchise was over. I am so glad they were wrong, and he is not only still relevant, but he’s choosing these smaller films, where he is “allowed” to go all out, balls to the walls. Not just in this film, but in the already mentioned Swiss Army Man, it’s insane how “game” he is for anything; as long as the movie comes out well, he’s there for the director(s). And it shows on the screen; he’s so easy to root for in any film he appears in.

I am somewhat familiar with Samara Weaving, but she seems to be on the same trajectory as Daniel, except she was never the star of a major franchise. But she doesn’t need it because something tells me her time will come. She is a talented actress who also seems to be down with anything. You could argue she’s continuing her trajectory from Ready or Not (2019, my review here) and appears in yet another original, not mainstream film where she proves (yet again) how talented she is. I would love for her to join MCU. Not because everybody has to but to cement her star power and get her name to be more known to a larger audience. Because I fear she is still fairly unknown, despite her being in many films and proving she has the acting chops necessary for anything.

The main reason I am talking about both performers is simple – they are the film. If you don’t buy what those two are selling, you won’t enjoy the movie. They work not only separately but altogether, they played really well off of each other, and I would love to see this pairing again on the screen. It doesn’t have to be a sequel to Guns Akimbo, but I would love to see both Daniel and Samara doing maybe a straight-up comedy? I think that could be hilarious. And don’t get me wrong, this film is funny, but it’s not a comedy per se. It’s a straight-up action madness that is concerned with looking cool; at all times. And for most of its runtime, it works. The only tiny issue with this movie was the third act I thought was “lagging” a bit. But not enough to sour my mood or enjoyment of this crazy film.

Overall, Guns Akimbo is a blast, at times, quite literally. It’s a hyper action movie focused primarily on two people; who are both excellent in this film. Sure, is the story predictable at times, mainly in the third act? Yes, yes, it is. But the movie managed to stay cool without being obnoxious about it. The best way I could describe it is this film is “sneaky cool”. If Guns Akimbo were a guy at the bar, he’d be the confidently quiet cool guy, knowing exactly; what he is and what he isn’t rather than the obnoxious loud guy telling you “he’s kind of a big deal”. And even though this film is anything but “quiet”, I believe my metaphor works because this movie is aware of what it has going for it, and it leans into it, for better or worse. If you want to see something new, exciting, original and, at times, insane, look no further.