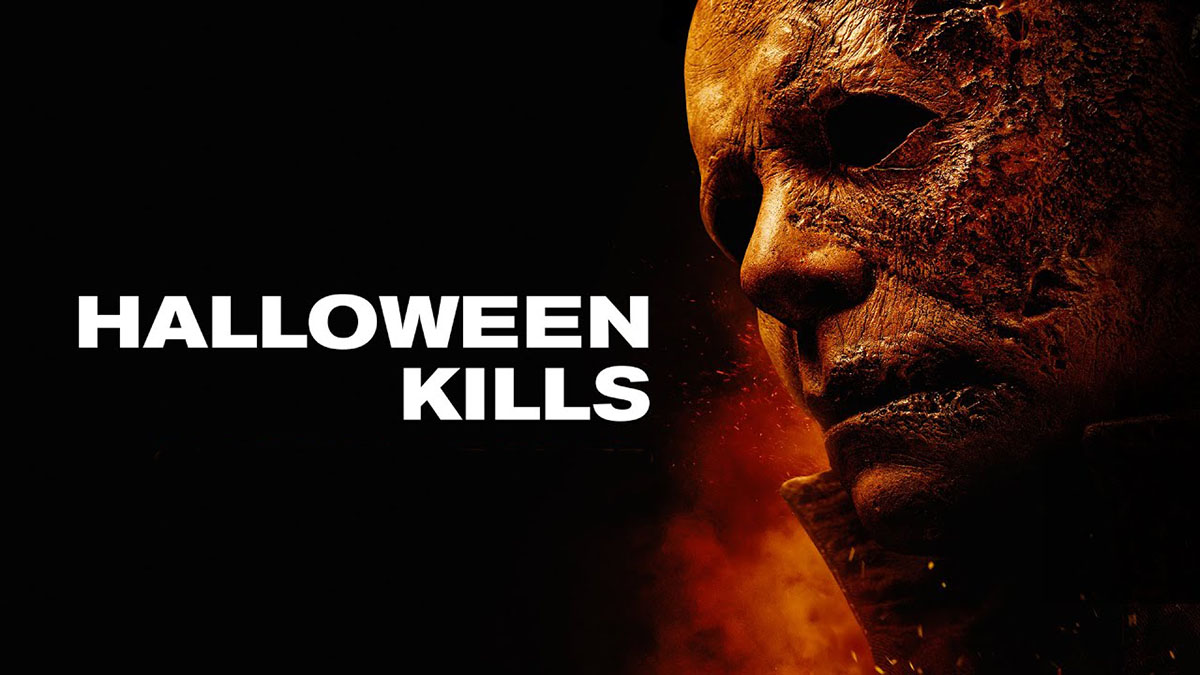 I am one of those “nutcases” who have watched every single Halloween film. Yep, all the “original films” (eight movies in total), both Rob Zombie remakes and now this new trilogy that is continuing with the story of the original Halloween (1978) while ignoring all the sequels. Just like Michael Myers, this franchise won’t just die. Yet, for the most part, you understand these movies are “just” dumb slasher films that shouldn’t be taken seriously, so you try and have some fun with them. And that was my mindset while going into this film. I knew the film was received very poorly, yet I was still intrigued to see why, because to tell you the truth, I liked this more than I thought. Better said, this film has some great set pieces that are way better than the film those set pieces take place.

Halloween Kills continues where the previous Halloween (2018) ended. But unlike the last film, this movie felt more all over the place, and there was a reason for that. The people behind this new trilogy didn’t know they were making a trilogy when the first film came out because Halloween Kills and Halloween Ends (2022) were announced in July 2019. And this is the biggest problem with this movie in my eyes; it felt like a bridge that has one purpose and one purpose only – to set up many things for the “final showdown”. Look, bridges are important, same with second films in trilogies as long as they are fun to watch. And this one was, until the last 20 minutes.

As I have alluded to above, I preferred certain set pieces and thought they were done very well. For example, the car scene where Michael kills four people was fun. I even liked the “this night we fight back” mentality because that is something we haven’t seen in any sequel, the entire town effectively hunting down Michael. It might have been over the top, but I don’t know what to tell you; if you “give in” to this element, you might enjoy it too. What I didn’t like and where this film started to fall apart was all the survivors from the original Halloween film started to tell their stories, and this movie had to retcon many characters from the original film into this one to have a story to tell! I will be honest I didn’t really care for that.

Another thing I didn’t enjoy was putting Jamie Lee Curtis‘ character in the hospital for most of this film. I get it; it makes sense logically since she got injured at the end of the previous movie, and of course, we want to “set them up” even more for their inevitable clash in the last film, but come on. You have this icon, legend, somebody who helped to coin the term “scream queen” and put her on the sidelines… When I realised what was happening and that Jamie would be “out” for most of the film, I hoped they would at least use this film to establish Judy Greer‘s more, and they… kind of wasted her character again!?!?

A mini-rant incoming – poor Judy Greer. She has been typecasted as “supporting actress only, never the lead”, and I think that’s just wasting her talent. Because she can do it all, she can be funny and dramatic and has the charm and the “it factor” to lead a film franchise. I hoped this movie would at least do something interesting with her character, and they gave her a few scenes, sure. But then… Ok, I will have to go to spoilers because I wanted to talk about the ending of this film anyway, and the mistreatment of Judy is just one part of why this movie fell apart for me at the end, so…

Can somebody explain to me why Judy’s character had to die? Like the actual fuck? Wouldn’t it be kick-ass to see all three generations of Strodes (as she is supposed to be Jamie’s daughter) taking one (hopefully last) stand against Michael in the final film of this new trilogy? I guess her death will fuel Jamie’s character even more, fine, but Jesus on a toast, what a waste of a great actress.

But believe it or not, that was only the cherry on top of that cake of disappointment some call Halloween Kills finale. Because, here’s the thing, until the last 20 minutes happened, I kinda liked this sequel. I did not “love” it by any means, but I thought it was an ok continuation with some flaws but enough “filler” to be fun. And then the last 20 minutes happen where the mob finally “gets” Michael. I didn’t mind that the altercation was shot like a ’90s rap video, but I didn’t like what happened after that. Yes, we knew Michael would survive it; no surprise there. But in those last scenes, there is no sense of space or direction as the “mob justice” happens on a crowded street. And suddenly, he was capable of killing everyone without alerting more people that should be close? Also, for him to kill Judy (who was upstairs in the house SURROUNDED BY PEOPLE), can someone explain to me how he managed to sneak past all those people to get to her? Is he actually a mythical creature now where he can materialise anywhere he likes? I don’t often complain about these things, but this genuinely threw me off the loop as suddenly I had no idea what just happened, how did he not alert more people (while killing the mob) and how this big dude managed to sneak past everyone to go upstairs and kill poor Judy.

So yeah, the ending kind of spoiled a bit of the fun I was having. I am not saying because of it I hate this film now, no. I still liked it enough, but Halloween Kills is the unfortunate example of what might happen when you are juggling too many ideas at once. When you are focused on making a trilogy while forgetting that the film that bridges the first and the final one should make some sense on its own, they have tried a few things here, and I am afraid most of them didn’t work in the “most satisfying way”, to say it politely.

Overall, Halloween Kills is a step back for this new trilogy. Where the first movie was a decent surprise, this film feels more convoluted, contrived, less like a film and more like a tool that builds to “this epic conclusion”. But you have to wait and pay extra money to see that conclusion. That is another thing about this sequel – if they somehow manage to make a satisfying finale and use some elements from this film to make it happen, upon a further rewatch, this movie might be viewed differently. But we won’t know it until we see the last movie. So until then, this is one of the weakest Halloween films. And a film that (yet again) wasted Judy Greer.