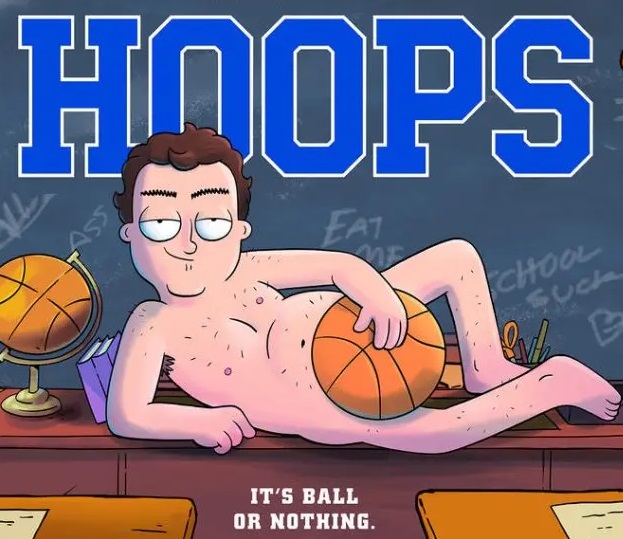 It’s tempting to jump on the bandwagon of “everybody get’s a Netflix show nowadays”, especially when talking about Hoops. Especially after really weak start and this one was a bit… not great, let’s just say that. Usually, the first episode sets a bar and the rest of the TV show follows, luckily with this one, if you stick with it, it does get better, albeit not that massively.

Don’t make any mistakes though, so far, after watching the entirety of the first season, would I recommend it? Maybe, but with a warning – this is not something “deeper”. Take BoJack Horseman (2014 – 2020) – a quirky, sometimes bit too filthy and darker TV show that started like a typical quirky comedy, just to pull the rug under you half way through the first season, where after that you knew this show will be different. Hoops is not that. Hoops just… is. At least, for now.

The first two episodes or so feel like the writers just discovered swear words, so they are trying to utilise them all as much as they can and (I never thought *I* will write something like this) but it was a bit over the top. And that’s coming from a guy who swears a lot. Luckily, soon after there was an actual humour not just based on the fact the main character is a proper looser, who had never amounted to anything in his life, and the show does get better. But so far, it hasn’t reached level of quality we’re used to with the TV shows lately and that’s why all the reviews I’ve seen for this TV show are what they are. Because Hoops just kind of is there, with a few decent laughs per episode, but at the end of it, where you are waiting for something more to happen, you’ll find there is not much meat there.

And maybe that is the point of this show? Maybe we are so used to everything being some sort of parody, social commentary and anything in between, a show like this one feels a bit odd, as everything it wants is just to make you laugh in any way it can. Sometimes it works (the 8th episode entitled Death was my favourite) sometimes it doesn’t (the very first episode was just really awkward and not really funny episode to begin with) and after the 10 episodes that are available so far, I am intrigued as to whether there will even be a second season and if so, will it be any better…?

That’s why I don’t want to rush to any “definitive” judgement, as we only have 10 episodes to judge this show on. And if the TV show world has taught us anything, sometimes, it takes a season or two for a show to find its strength and get going properly. Will this be the case for Hoops? Maybe. Would I recommend it based on what I’ve seen so far? Only to somebody, who doesn’t expect anything more than dumb humour and is fine with characters, who are on the shallow side. Is there a massive room for an improvement? 100%. Will I be watching season 2, if there is one? Yep, to see whether Hoops will evolve into something better, or whether it’s a one trick (or in this case, dead) horse.