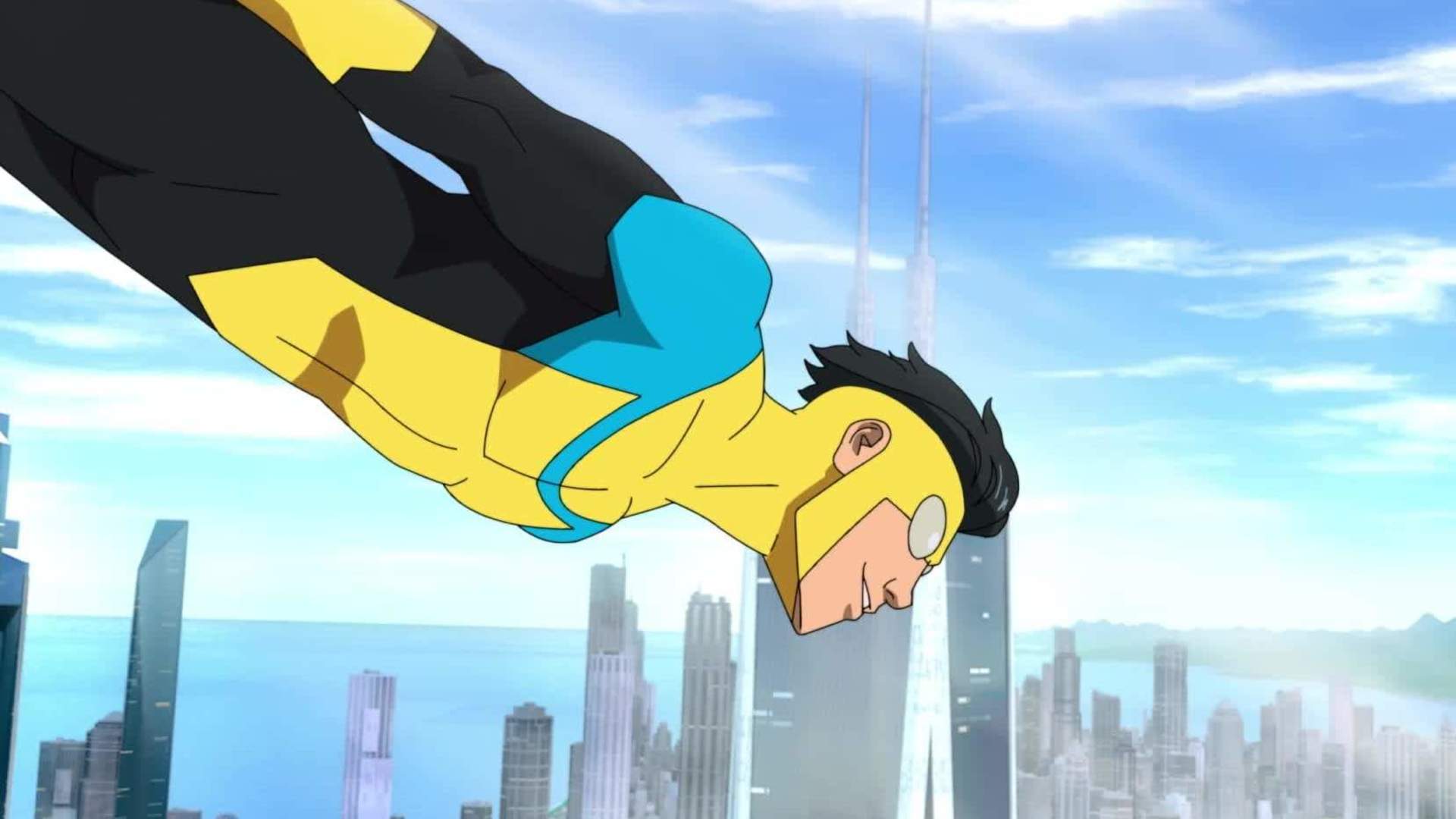 As with plenty of tv shows nowadays, I’ve heard a few things about this one, but (luckily) nothing too specific. I somehow managed to avoid all the spoilers and just binged the entire show one Sunday evening – early Monday morning (finished around 1AM). And even though I was pretty tired getting up, going to work the next (I guess technically the same?) day, it was worth it. Invincible has a lot of things to offer, and the over the top anime-like violence is just something to entice you with, it’s not the “main course”.

I have only seen couple of animes in my life and most of them would be the likes of Pokémon (1997 -) or Digimon: Digital Monsters (1999 – 2003), something more tailored towards children. And I know when people refer to shows as “anime”, it can have entirely different meaning, with lot of adult themes, philosophical context etc., and I have yet to get into those. But I’ve been on “the Internets” for some time now, where I know the (for a lack of better term) “anime aesthetic”, how the fight scenes are shot, how sometimes, everything can be slightly over-the-top (but that’s the magic of it), the editing style (mainly fight sequences are usually shot/edited in entirely different way) so I understood Invincible was definitely influenced by them a lot. So, if you like “anime-like aesthetic”, storytelling and adult themes (so far we “only” got extreme violence and gore, but no scenes of sexual nature or anything like that) this show might be for you.

It’s really hard for me to write anything about this without going into some heavy spoilers, so before I put the spoiler tag in, let me just say, this is the perfect example of a show, you should go into blindly, as it definitely has its share of “mindfuck” surprises along the way. I was genuinely glad I didn’t know anything before going in, as that made me curious about… well, everything. Also, this show feels like even though it has certain “rules” it needs to follow, all bets are off and sometimes, you think “hey, that’s a cool character(s)” only for them to die sooner, than you might expect. Think of first couple of seasons of Game of Thrones (2011 – 2019), where basically nobody was safe. And I really like it. If you haven’t heard anything about this TV show, stop reading this review, go on Amazon Prime and get it watched. For the rest of you…

If you really think about it, this show doesn’t do anything “new” or out-of-the-box per say. It’s your almost basic “teenager gets superpowers” story. Except here, he’s the son of the most powerful being on Earth, who towards the end of the very first episode just snaps and kills everybody on his “team”, in really explicit way. You do not know why, you do not understand what just happened, but from that moment on, it’s obvious, you are in for something serious. At times, I debated myself, whether it was the correct decision to show us it was actually him, who killed them (it would have been really easy to make this almost a plot point for couple of episodes, “who killed the others?” mystery) but then, the further the show goes, I understood it was better we knew, as we could see him almost “brewing” on the inside. At points, it’s almost like he wants to tell everybody, it was him and why, but he knows, it’s not the time yet. The reason for that is, he makes himself solely responsible for his son’s training. Hoping, he will eventually get him on his side.

The first season definitely setup everything really well – it introduced us to a pretty comprehensible world, where it we understand there are people with superpowers, but the show never really tells us why some people have them and some don’t, which I also appreciated. It feels more natural to just throw us in the middle of a world, where powers are real thing, let’s just accept it and move on with the story. It also hints at plenty of things to come, so you know, there are couple of seasons (I’ve heard someplace, that if this is done correctly, they have material for at least 5/6 proper seasons, as the comic books, which the TV show is based on, is actually finished, so you can go and read them for yourself, or just google the spoilers, that might also work I guess) worth of great material to come and I really hope that will be the case, as the start was really, really awesome.

What surprised me was, how funny this show can get, even during some serious moments. Invincible definitely has quirky sense of humour, which doesn’t go over-the-top, it never felt “in your face” kind of jokes. They always had their place, were funny and worked, partly because of the amazing voice casting, as that is top notch. Especially the main foursome (not in a dirty way!) Steven Yeun, Sandra Oh, J.K. Simmons and Zazie Beetz all fit their characters really well and they give their 100% into every line reading. Who (unsurprisingly) shines the most, is J.K. Simmons – he’s had so many memorable roles over his long career and here he is, adding yet another notch on his belt, and doing it brilliantly. Truly, from the top to the bottom, amazing voice casting.

There is one more thing I need to mention, I thought this show did really well – the relationships. Not just the romantic ones, but also between friends, family… For example the dad/son relationship is portrayed really well, where you understand plenty about both characters of their characters, just by watching them interact with each other. However, the real highlight for me was Mark’s relationship with Amber. Plenty of movies tried to do the same thing and it always felt more or less annoying, as movies simply don’t have the runtime to do it properly, so it always felt rushed (the superhero needs to be saving people -> doesn’t have the time to spend with his girlfriend -> they break up because of it). This show also does this, but because we get to see everything from the very beginning of their relationship, to the end, we actually understand both of their sides really well, so it never felt annoying or cheap to me, as that is exactly what would have happened, had you dated a superhero. They wouldn’t be around most of the time, as you know, there is always somebody, who needs saving. What I loved was the little twist they threw in, where Mark finally tells Amber, why he’s not around and she just tells him that she’s figured it out a long time ago. Any lesser show would have had the simple “oh I see now, ok, all is forgiven” thing, but not this show, as Amber raises some good points (if he truly trusted her, he would’ve told her sooner etc.). I can imagine some people might still be annoyed with Amber’s character, but I could really understand her and definitely will be rooting for those two to be together, rather than Mark with Atom Girl (too obvious).

Overall, Invincible is definitely a show, that’s quite unique, it plays with different superhero tropes quite well and if you think about what the first season was all about, it can be read as a show about what it is like to become an adult. How you need to make tough decisions and ultimately decide for yourself, what kind of person you will become and need to live with your choice. It also looks at different kind of relationships and how those might change or are affected, once you “grow up”. Even though in this case, the growing up part also comes with being one of the most powerful beings on Earth. Can’t wait for future seasons and really hope this is a start of something truly great.

Comments (2) on “Invincible Review (Season 1) – This Should Be Interesting”