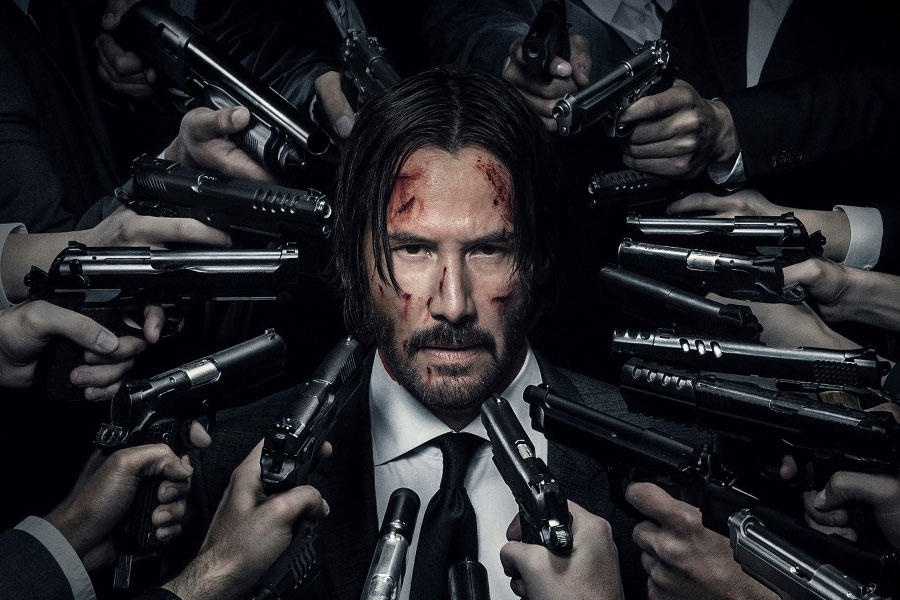 As I mentioned in my previous review here, I didn’t need several viewings for John Wick: Chapter 2 to become my favourite out of this (so far) trilogy. Something clicked and even upon my latest re-watch, I still consider this film to be the best out of the ones we have gotten so far (and yes, I know there are at least 2 more movies coming our way).

Paradoxically, one of the main reasons I like this movie as much, you can tell they have a bit more money to spend, which is usually a downside for any sequel, as with more money filmmakers usually forget what made their first movie such a success. But not this franchise. They took the money and utilised them for bigger set pieces, new locations (I love the Italian part of this movie) and added a few actors (reuniting Keanu with Laurence ‘Morpheus’ Fishburne, for the first time since the Matrix Revolutions (2003)) but most importantly stayed true to what the first movie was. Yes, in Chapter 2, everything feels bigger, but it naturally bigger, it never felt forced, unlike other sequels.

I believe part of the reason for that is the subtle, but great, world building. We have a few hints of that in the first John Wick (2014) movie, where you get the basic gist of it (there is a secret society of assassins, they use golden coins as their currency, they have some rules they follow, John Wick was the best out of them all and managed to get out from that world) and what this sequel does so well is expend on that idea, give you a bit more rules, that make sense. Whenever these films are discussed, plenty of people focus on the action and the action only, which is great, don’t get me wrong. But people often overlook the simple, yet effective world building. They don’t try to force feed you the rules in one go, every movie you have a set of “new” rules we didn’t know prior and it never feels forced.

My favourite part of this movie, as mentioned prior, is the Italian mission. Where we meet Franco Nero, who runs the “Italian Continental”, Peter Serafinowicz gives Keanu some weapons and off he goes for another “impossible” mission. The entire sequence is honestly great, the level of planning (simple details such as Keanu leaving his weapons scattered throughout the underground, knowing he needs to reach certain points, is a great touch) is smart and you can tell John Wick is kind of a super human. But somehow, it never feels laughable. Some moments might make you question what else can he survive (or maybe a better question what would actually kill this guy?) but you let it go, because the action scenes are so entertaining and well shot, you just go with the flow and don’t have a time to nitpick. That’s always a great sign, movie being so entertaining you don’t really stop and think about any plot holes, because you are fully transported to this movie’s world.

This is yet another thing in which these films succeeded where others failed – you could nitpick this and other two movies to death, but you will not, because they are quick and entertaining. They might suspend your disbelief a bit, but never to something like Fast and Furious level, where they literally became superheroes with cars. John Wick is close to a superhero, but something always happens where you not only see him bleed, but also suffer and that makes him more relatable. Plus, he’s on plenty of medicine, so you could make an argument that he’s reached a super level of functioning junkie, because he needs something to numb all that pain (next time you watch these movies, notice how often he gets and takes pills).

Overall, John Wick: Chapter 2 was the film that convinced me that I will watch any future sequels and that I am fully on board with this becoming a franchise. As long as it’s always directed by Chad Stahelski (credit where credit is due, this guy has worked himself up from stunt coordinator to a movie director, who can shoot action sequences like almost nobody else today) I will be on board. And Keanu. Without him, there is no John Wick.