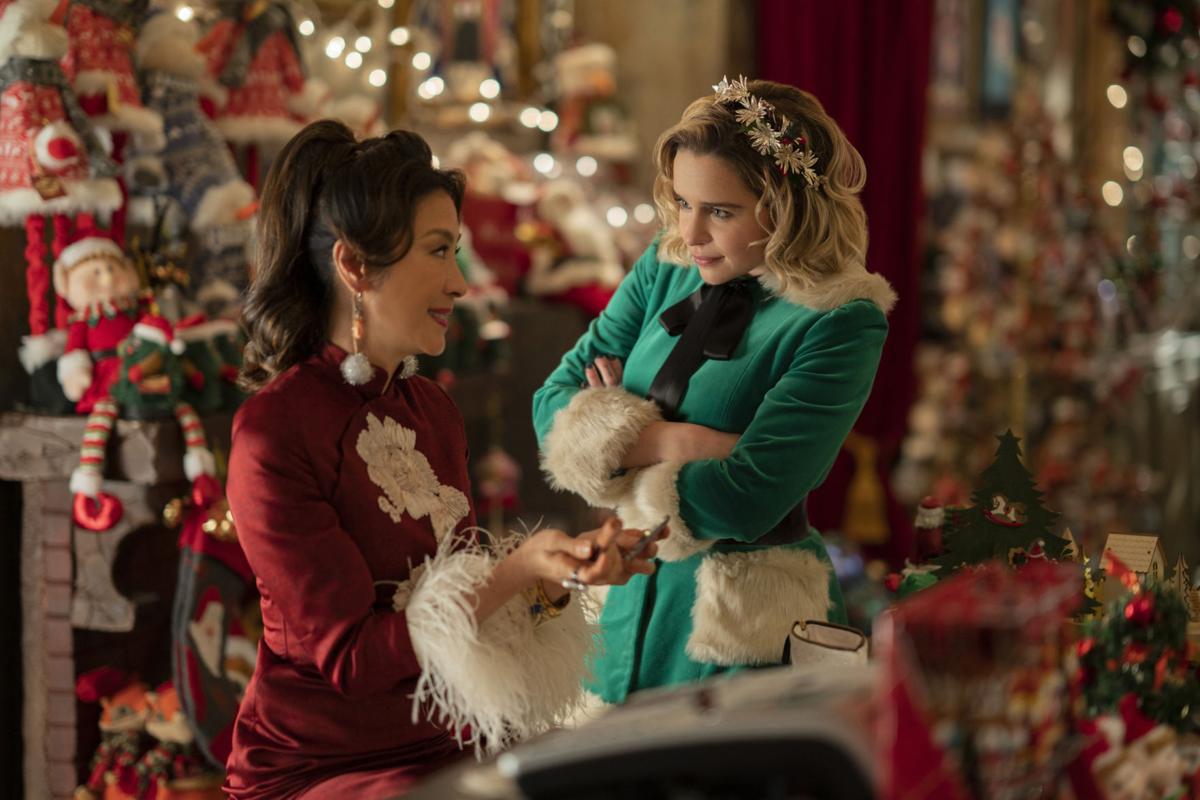 Thinking about this now, would it be more sensible for me to write about this movie right around the Christmas period, while people are more likely to read reviews for Christmas movies to watch…? Yeah, probably. Oh well… Last Christmas is a weird movie for me, as it’s perfectly watchable, but ultimately it feels like that one friend, who’s trying so hard to be your best friend, he becomes irritating. That’s how this movie ultimately felt like to me, except in this instance, it’s trying to be way to clever.

The biggest strength of Last Christmas is without a doubt, its casting. Henry Golding is (and I am saying this as a heterosexual man) really good looking and charismatic, to the point he makes me jealous as to why I can’t be like him, Michelle Yeoh was fun and her story line with her man I mean Boy (played by Peter Mygind) was actually sweet and charming and Emma Thompson playing a Croatian, first feels slightly out of place, but I liked her performance and her place in the movie, as it belongs there (I will talk about that in a second). But the best performance by far and the reason I am rating this as “high” as I am, is Emilia Clarke. On the first glance, you might think she’s just playing real-life version of herself (as she is as adorable as a basket full of puppies and kittens mixed together) but her performance has layers. She’s got some scenes in this movie, where her character is all over the place (as her character makes one bad decision right after another) but she plays it in a really relatable way and she’s not over the top. Plenty of actors in other comedies would have chosen to play character like hers more comedically, even in the moments where it wouldn’t fit. But not Emilia, she wasn’t afraid to be all over the place emotionally, as that made sense for her character. So it’s much easier for us to root for her throughout the film, because we want to see her succeed, as her character feels real. Honestly, I don’t think people give her enough credit.

As mentioned before, this movie ultimately feels bit more needy, in two aspects. First aspect was, and I need to warn you here, this will get a bit political, how Brexit influenced the mood in the UK. And I didn’t mind that as much, as I am also a foreigner, living in the UK. Luckily, Scotland seems to be a bit more welcoming and a way less “get back where you came from!” place, as 99% of all Scottish people I have met throughout my almost 10 years living here, were friendly, smart and kind people. It’s a brave move to make a “feel-good” Christmas movie, but you also feel the need to include Brexit, and how the toxicity surrounding it affects people (and not just the foreigners/immigrants, but the English people and their attitude towards “others”) living in the UK and that is why I did eventually liked the fact Emma Thompson’s character was a Croatian migrant. Yes, it is a bit of downer, and yes, it is a bit (ok, a huge) of political statement, but wouldn’t it be more harmful to make a Christmas movie based in London in 2019 and completely ignore something as massive and life-changing for so many people? Anyway, this aspect felt strange, but I would be able to “cope” with it better, if it wasn’t for the second aspect, and the ultimate reason I struggled with this film.

I am not going to go into spoiler territory, as I think I can discuss it vaguely enough for people to understand my point. From the very beginning of Last Christmas, it’s strongly hinted that Emilia’s character went through something bad (medically) not that long ago, but we don’t know what it is, until we are about 70% into the film. Fine, seems interesting. But you can tell there will be more linked with this, you can feel there is a twist coming up. And there was. I am not going to claim that I predicted THAT particular twist before it happened, as I didn’t guessed it right. But you know what’s even more disappointing, when watching a movie, knowing there is a twist, and it’s not something you were expecting? The fact once the twist is revealed, it does nothing for you. Honestly, Last Christmas for me will be that one movie with a twist, that literally didn’t have to be there, as it didn’t add anything extra. I understood everything they were trying to do/say with this, I honestly do, but it felt shallow, empty and false. Especially with the constant foreshadowing, I expected something different, more impactful and when it happened, when the twist was finally revealed, I just said “Wait, that’s it?”. Honestly, it didn’t work for me.

And that was ultimately the biggest let down for me – if this movie didn’t feel the need to have some sort of twist and focused more on the relationships they already had established (Emilia and Henry, Emilia and her mum, Emilia and her sister, “Santa” and her “Boy”) and flashed them out a bit more, this could have been an interesting Christmas movie, that might have led the way for others. It could have been a great example of “see, Christmas movies don’t have to be just all happy, they can touch on complicated relationships or even politics” but instead of that, Last Christmas will be remembered as the movie with a twist, that leaves you colder than Santa’s balls throughout the toughest winter on North Pole.

Overall, I think Last Christmas is a decent movie, that could have been even better, had they focused on the right areas and weren’t trying so hard to surprise the audience. But, if you are a fan of Emilia Clarke (and who isn’t?) it’s definitely a must see, as she carries this movie on her tiny, elf shoulders. 😉 I am not being funny by the way, if she wasn’t part of this movie, my rating would have been way lower.