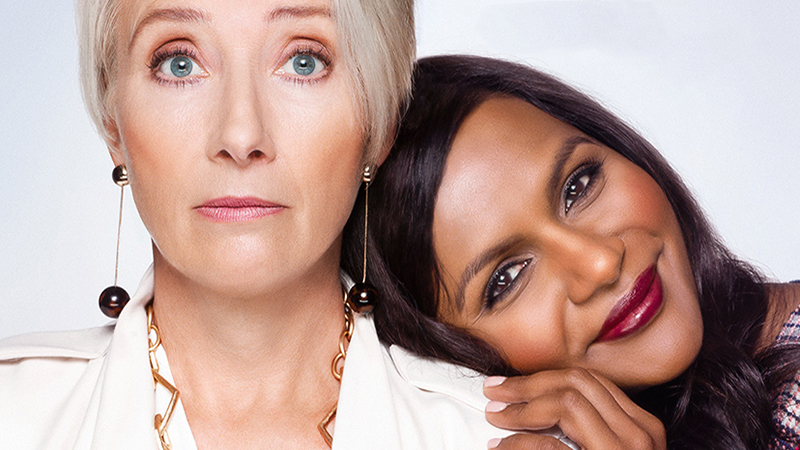 Late Night is definitely product of our time, where more and more we are getting comedies, that address harsh reality and injustice of today. This movie (or more precisely, its main star and screenwriter, Mindy Kaling) focused on late night setting (which is understandable, as she used to be an intern for Conan O’Brien, so she knows this environment really well) and the representation (or lack thereof) of women, and people of colour and how hard it is to get a gig like this (still?).

The movie definitely let’s you know that straightaway and isn’t shy about it, and I reckon that’s why this movie is rated fairly low on IMDb (currently sitting on 6.5/10 with 23.500+ votes) as just a mere mention of things like that irks some people the wrong way. I think this movie could’ve easily been a preachy, way to “woke” of a movie to be enjoyable, but, because of all the talent involved and the clever screenplay by Mindy, it’s not that at all. It’s actually the very opposite of that.

Late Night is a smart movie about a few real issues (the movie mainly touches on topics such as race, sex, age, you know, the to-go topics for the most awkward dinner conversation with your elderly relatives, you will ever have) but it never goes overboard with it, meaning we still are watching a comedy, where the one and only Emma Thompson proves that she’s still a force to be reckon with. Her relationship with Mindy felt real, and the two of them had a really good chemistry together. Mindy herself was great, I thought she did really well, especially playing “against” an icon such as Emma, but she held her own.

My main and practically only issue with this movie was (surprisingly) with the script, where event though it was clever, I felt it wasn’t clever enough. Let me explain…

The first thing about Late Night is that it’s about Mindy’s character mainly, and we are supposed to be rooting for her, as she’s fighting everybody and works her way up, BUT… it’s not as much because of her own skills/abilities, but because the choices are either made for her (like her being hired had nothing to do with her skills at all) and she’s dealing with that, or she’s bad at her job, until her co-worker points her to the right direction, tells her what she should try, so she does it and of course she succeeds. There is a point, almost one hour into the movie, where she makes a decision to attend the charity stand-up thing, she’s been talking about for most of the movie, even though Emma Thompson’s character tells her she’ll be fired, if she goes. And at that moment, I’ve realised that might be her first actual decision without anybody else giving her direction, or where some sort of coincidence happened. All I am trying to say is Mindy Kaling is clever, likeable and adorable, so of course we all want her to succeed in this movie, but it shouldn’t take her (especially if she’s the main character) almost an hour before she takes her destiny into her own hands.

The only other thing I’d say about the script is, I honestly wished it would’ve followed some nontraditional ways, as you can safely predict what happens next. For a normal, “switch your brain off” comedy, that’s not a problem, but for a comedy that’s a smart, bitty (that’s 100% a word!) and wants to address several (important) issues, you’d think they would didn’t feel the need for the fairy tale happy ending, or they would at least threw something into this mix, that wasn’t so predictable. I expected bit more, story wise, to be perfectly honest.

But other than those two points, I had a blast and Late Night is a delightful, smart comedy, that’s definitely worth seeing. I don’t think you will have a bad time with these two amazing actresses.