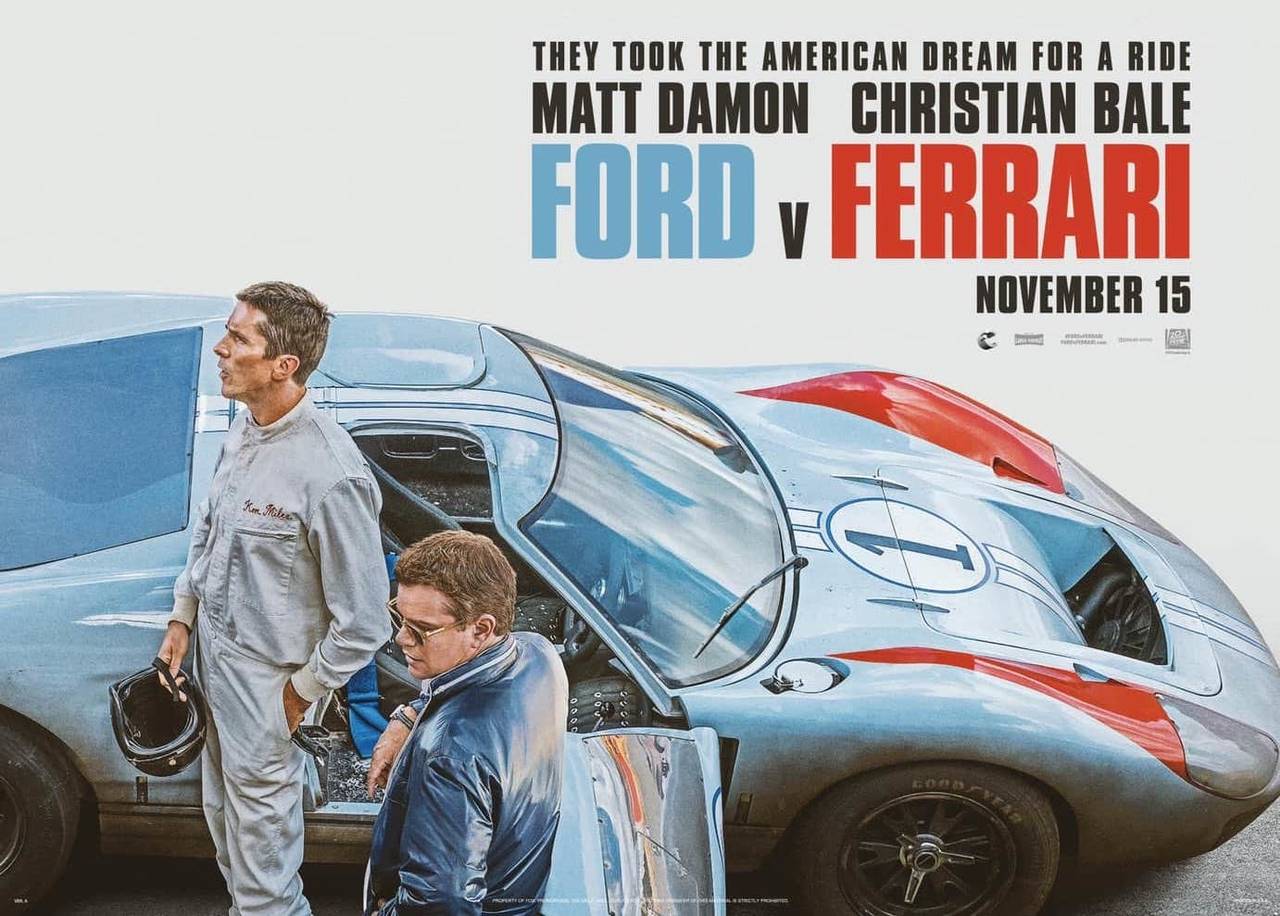 Before I go into this review, let me just explain the heading – this movie has two different titles, depending on where you are. In most of America, it’s called Ford v Ferrari, and pretty much everywhere else it’s called Le Mans ’66. I don’t know the reasoning behind this, whether the producers believed Le Mans (the actual race) has such a pull, that it would bring more people to the theatres than names of two (arguably) biggest car brands in the world, but I don’t like it. I understand, especially being from non-English speaking country, that movie titles get translated, which is fair. But here we are, talking about two different titles for the same movie and that just confuses everything. Just imagine trying to have a conversation with somebody, who is not such a movie fan, and trying to explain to them, that you both have seen the same movie, but since you are from two different places, it’s titled differently… What I am trying to say, it’s needlessly confusing. Now, with this rant out of the movie, let’s talk about the movie (I will be calling it Ford v Ferrari as personally, I prefer that).

I will be the first to say I am not into moto sports at all. Doesn’t mater if it’s Le Mans, F1, F2, F365, F42069, it never grabbed my attention. But, strangely enough, I do enjoy movies from moto sports, as they tend to be great (perfect example of this would be Rush (2013) that was pure joy watching in the cinema and a movie, that’s still not talked about enough) so I was looking forward to watching Ford v Ferrari. And sure enough, it didn’t disappoint.

Strangely enough, not the driving/racing scenes, but the actors are the best part about this movie – both Matt Damon and Christian Bale are great as their characters, but more importantly, they have great chemistry between each other. You trust the fact these too have been friends for some time, especially when you see them argue about technical things that, unless you are a mechanic, you will probably not understand. I also need to highlight Caitriona Balfe as she wasn’t just “Bale’s wife”, even though she didn’t have plenty of scenes, the ones she was in, she delivered and made us, the audience, understand exactly what kind of relationship her and Bale’s character had. And that’s not easy thing to do, especially in the fairly limited time she had. Definitely somebody I need to watch out for.

My only issue with this movie and the only reason I am not giving it the highest rating – there was something about it that didn’t pull me into the story properly. I don’t know how to explain this, so let me try it this way… Do you know the feeling, when (sometimes) you are watching what you know is a great movie, with great performances, everything feels properly done and great, and yet, there is something that’s not clicking for you? As if something, some invisible hand is pulling you back slightly, so you can’t “absorb” yourself in the movie fully? No, just me? Ok then. Because that is how I felt while watching Ford v Ferrari. Technically, this movie is great, I had no issues with the story, casting, soundtrack, even the length didn’t bother me too much, but… there was something that didn’t grip me.

And it’s not even the fact the movie is about something I have no interest in outside of it, as I have loved (and still love, even though I haven’t seen it since the 2013 cinema screening) Rush the moment I left the theatre, saying what a great movie it is. Don’t get me wrong, Ford v Ferrari is definitely a movie worth watching, I don’t think you would have a bad time with it, I sure didn’t. There was just something, that either wasn’t there, or something that subliminally bothered me…?

I do have a list in my head, that’s full of movies just like Ford v Ferrari, where I might have liked the movie, but I didn’t “love” it and want to go back to them in some time, to see whether I change my opinion, whether I might grow and appreciate a different aspect I might have missed the first time… this movie definitely goes on that non-existing, yet very real list, as it’s 100% worth your and my time.