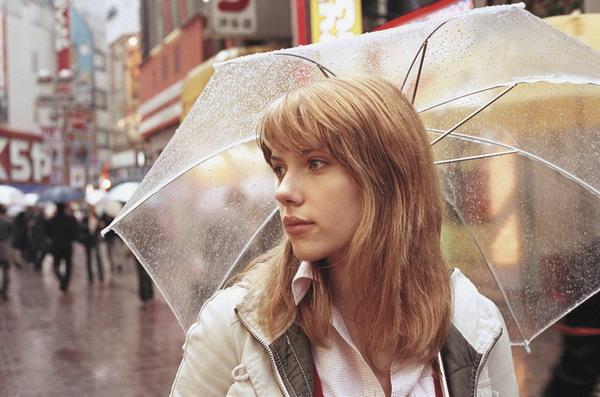 It’s hard to put into words what this movie means and has meant to me for the past more than 15 years now. But I knew starting this blog, that sooner or later I need to review Lost in Translation. The movie, that’s been at the very top of my favourites for more than 15 years now (I believe the first time I’ve seen it was around 2004/2005). On my most recent re-watch I’m happy to say nothing has changed. Which either means this movie is still as close to a perfect movie as possible, or I’ve stopped growing mentally and have peaked when I was 15. For the sake of this review, let’s presume it’s not the latter, and move on. 😉

I still remember my very first time watching this movie, as everything came together nicely – it was one of the very first movie’s I’ve seen with subtitles and not over-dubbed (believe it or not, it’s still not common on Czech TV to have movies or TV shows in their original language, so we dub movies and TV shows, which doesn’t sound that weird when you are born into it, but once you get used to English and other languages, it’s striking how it can change and sometimes ruin a movie), it was just after my birthday, it was just at the time when I was getting into watching not just your “typical” Hollywood movies… One Czech TV had a summer thing, focusing on “indie” cinema, something you wouldn’t find someplace else (again, this was 2004/2005, way before streaming services became a thing) and this was one of the movies they were showing that summer. I remember watching all of them (one movie a week) but no other movie stayed with me for as long as this one. There was something about it I knew I loved, even though I couldn’t precisely pinpoint what is was.

That’s when I’ve started to realise I seriously love movies, as you don’t have to understand every single detail, you don’t have to “get” every single scene, hint, or symbolism, as great movies will let you in and make you live the story. Lost in Translation certainly does that. It drew me in with its almost documentary like cinematography, with its soundtrack, that is still unique but not in some “hipster” way, with the performances of the main stars, the ever so great Bill Murray and really young, but already perfect Scarlett Johansson just before she became THE Scarlett we know today.

I’d like to stop and talk about her, as I don’t think she gets the praise she deserves. People tend to focus on Bill Murray’s character, as he’s the funny, more “relatable” character, but Scarlett is the humanity of this movie. You could make an argument that Bill Murray is the brain, but Scarlett is the heart, potentially the soul of this movie. Before she became the sex-symbol and later the Black Widow, she was Charlotte – the girl next (hotel) door, who if played just a tad differently, would became annoying character, and the movie wouldn’t have worked as well. But Scarlett understood the character so well and knew how to portray her strong, yet vulnerable, confident, yet not sure of what to do, and most importantly, slightly terrified of things to come, doubtful of herself, looking for a purpose. And she plays it so honestly and with no hesitations, it seems like she’s not playing any character, it’s just who she is. Honestly, looking at the different awards and nominations, I can’t help but think Scarlett was snubbed that (Oscar) year big time, she deserved at least a nomination. This is the movie that made Scarlett Johansson into the superstar she is and I am so grateful.

The main reason I fell in love with this movie and why I still admire it today, is the beautiful direction by Sofia Coppola. And I am not just talking about shots and composition, no (even though this movie is beautiful to look at!) I am mostly talking about her establishing a relationship between Bill and Scarlett that feels so close, real and beautiful. Any lesser movie would’ve tried to have “something” happen between these two (either a really big fight, or some sort of bullshit romance) whereas this one takes its time to develop a friendship, that feels genuine, where there ups and there are some downs. But because both of them are written like actual people, there is no big fight, or over the top emotional scene, they just acknowledge that “the down” was a bad “move” on both of their parts and move on, almost instantly, but it feels like real life. The same goes for any hint of romance – any lesser filmmaker would’ve gone for something like that, but not Sofia, as it wouldn’t fit and the movie would’ve lost the connection. They were never meant to be together, they might not even see each other again in their lifetime after they both say goodbye, but they will always have that week or so in Tokyo, where they found each other, where each found something in the other person they needed at that very moment, that particular time. I am not sure whether any director would be able to give us something like this, where we have a man and a woman, in a really close relationship, without any hint of romance, sex or sleaziness involved.

As I was saying prior, I was just lucky enough to stumble upon this film at the right time, where I wasn’t sure where my life is going. And to be honest, I still don’t sometimes. But you know what? That’s ok. Just take it one day at the time. And maybe fly to Tokyo, go to a hotel and see if Scarlett Johansson is hanging around… 😉 As the movie tagline says, “Sometimes you have to go halfway around the world to come full circle”.

Lost in Translation is the perfect movie to me. I wouldn’t change a single frame, scene, actor or a song. I can’t see any way this could’ve been improved. Everything, and I mean everything, fits just right. Every time I watch this movie, no matter what stage of my life it is or where I am, for those 102 minutes, everything is alright with the world.