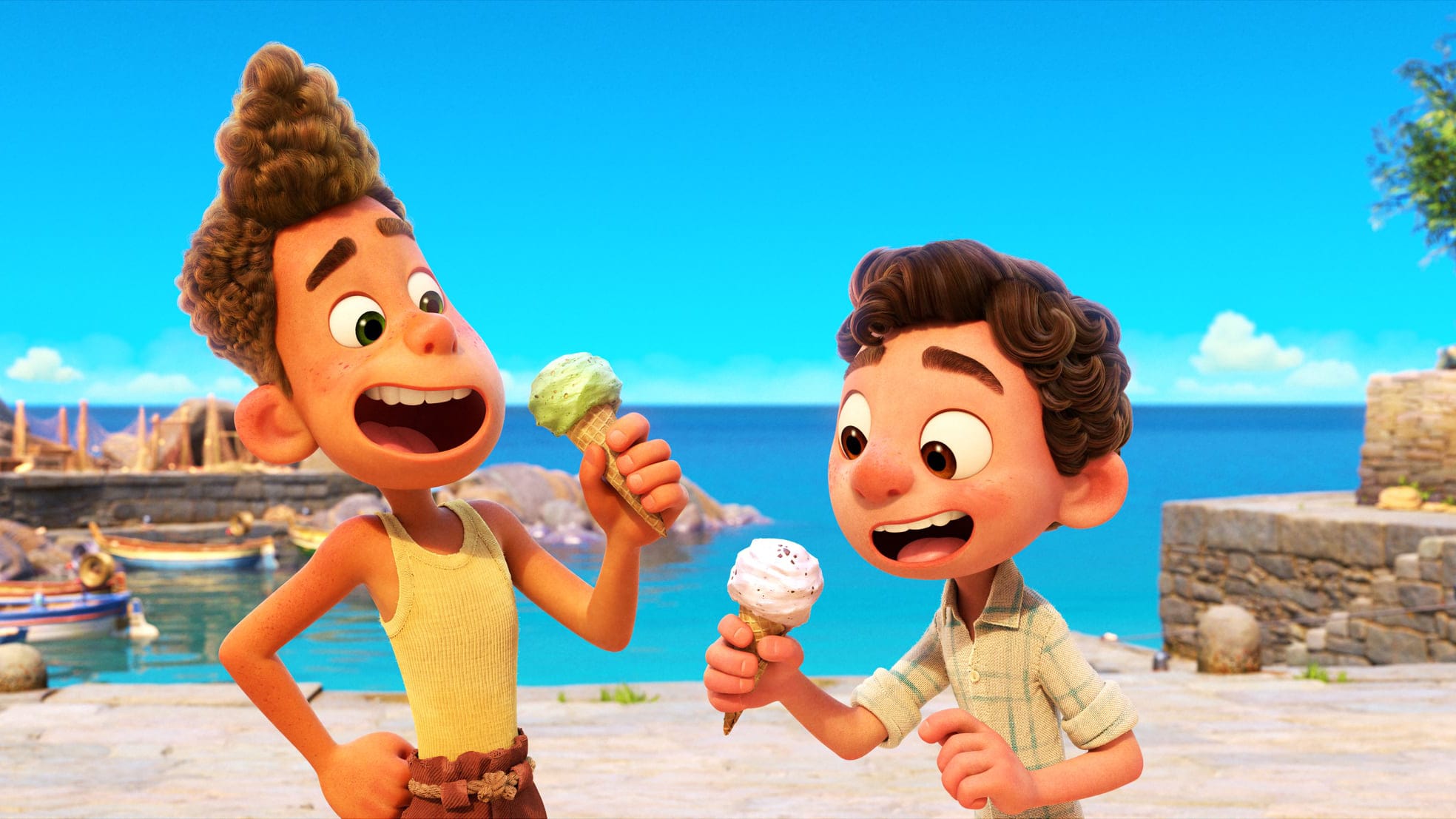 As I hinted in my Encanto (2021) review, I have seen Luca, and I liked it. Even though it came out way earlier than Encanto, for some reason, it took me a while to get to this film. And that was a shame because I enjoyed it. Not as much as I have enjoyed Encanto, but still…

I promise this entire review I won’t be comparing Luca to Encanto. But I have to do it at least at the start of my review, as not only did both come out in 2021, they are both on the “lighter” side of Pixar films. They both still have deeper themes as we are used to with Pixar movies, however watching both, you will quickly discover they are more light-hearted. And that’s a good thing, considering the last couple of years we’ve all had. And both movies have one more thing in common – they are so stunningly unique.

Luca might be the “brightest” film Pixar has done so far. There was something about the colour scheme that was so vibrant and soothing that was where Luca shined (the pun kind of intended) the most for me. The animators managed to capture Italy stunningly. I’ve never been there (but it’s on my list, and if it weren’t for COVID, it would have been crossed out by now), but I have seen a few Italian movies, and this is how I’ve always imagined Italy to be.

What I also liked was there were not that many Italian stereotypes. Look, there were a few, after all, how else would you make a movie set in Italy without saying things like “spaghetti, pasta”, etc., but the film never felt lazy or too stereotypical. Any other, lesser studio (*cough* Illumination *cough*) would have put ten times more Italian stereotypes and lazy puns within the first 20 minutes than Luca had in the entire film, I guarantee it.

As mentioned before, the story is pretty simple – what if instead of Mermaids, we would have Mermen (I know, officially it is a sea monster, but that’s just mean), and they lived amongst us? And this is where the deeper theme comes in – you could see this as a parallel for coming out, or you could see this as a metaphor for immigrants (us against them subject is present mainly towards the end). I appreciated that Pixar crafted this film in such a way it’s only up to you what you take from it. After all, you don’t have to take anything from it, and you can focus on the story of a little boy who is desperately trying to fit in, and more importantly, trying to learn new things.

That was another aspect of this film; I enjoyed Luca’s natural inclination for learning. I loved how Luca’s curiosity and eagerness to learn was displayed; it felt authentic and brought me back to my childhood when I wanted to know more about anything. Also, I can’t forget to mention the perfect voice casting of Jacob Tremblay as the titular character of Luca. His voice fits perfectly with the main character, and it was impossible not to root for him from the very start.

The only reason I am not rating Luca higher is quite simple – it goes as quickly as it comes. What I mean by that is; since it’s such a light-hearted story, it’s easy to get into it. But when the movie was over, I couldn’t help but feel I wanted a bit more. The primary story conflict got resolved pretty quickly, even the stakes never felt as high… And when the film you are watching is like that, chances are you won’t remember much from the movie after a couple of days. And that is what happened. I still remember the stunning animation, the fact I felt (at times) like I was in Italy, but if you ask me about details, I draw a blank.

And that is not necessarily a bad thing. Sometimes, you need to chill and be transported to someplace magical (like Italy :-)) where there isn’t that much for you to worry about. I suppose, when I re-watch this film, I will be smarter and see how many things still apply. It will be interesting to see whether I’ll feel the same, or maybe I will discover that I’ve underestimated/oversimplified this film, and it actually offers much more. It is a possibility, but for now, all I know is this wasn’t the “top tier” Pixar for me. But we all know that bar is set incredibly high.

Overall, Luca is an almost perfect animated movie. It’s not breaking any new grounds story-wise, but it has the unique power to transport you to Italy. Where you will swear, you are there, alongside Luca, Alberto and Gulia, enjoying pasta, spaghetti and some cool gelato. Yes, be aware, this film will make you hungry. If you want to watch it on an empty stomach, you might be in for torture. The only thing this film had going against it would be the slightly weaker story. But hey, if you have one of those days where all you need is a cute animated movie to watch, then Luca might be for you.